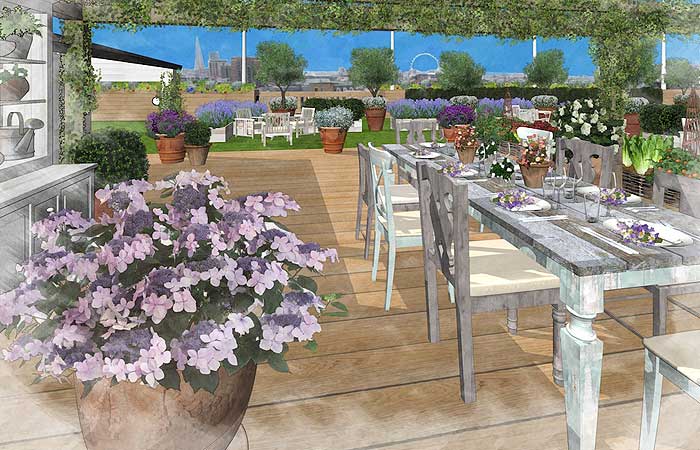 The rooftop dining scene on Oxford Street is already ramping up for summer with the opening of Notch on 5 May. But now we're hearing of another roof scene that looks set to dominate the street's summer scene.

John Lewis, of all places, has teamed up with event organisers Night Tales to put on a series of rooftop residencies by some of the hottest names on the London food scene.

The Gardening Society, as the space will be known, will be taken over first by The Dairy, followed by B.O.B’s Lobster and then Brad McDonald's Shotgun. The whole thing is being designed by renowned gardener Tony Woods and there'll even be a lawn for boules tournaments and other summer fun.

Robin Gill kicks things off on 27 May with his Dairy/Counter Culture residency with dishes like Lady Hamilton Cod with smoked roe, BBQ peppers and Isle of Wight tomatoes or sour potato flatbread, nduja and cultured cream.

On 28 June the space is taken over by B.O.B.’s Lobster serving up lobster rolls, lobster melt, Baha fish tacos and brunchtime Lobster benedict

From 2 August it'll be the turn of Shotgun serving brisket and pork belly by the pound as well as suckling pig stuffed pretzel roll, with bacon jam and Carolina mustard sauce - and sides such as Sweet Corn Esquites – butter- simmered corn topped with chipotle mayo and pecorino.

Drinks-wise there'll be healthy juices on throughout the day - but we're more interested in the cocktail side of things. Background Bars will use herbs grown and freshly picked from the rooftop garden so Rose Spritz will feature Belsazar Rosé, hand-picked garden herbs, fresh berries, grapefruit and Fentiman’s and the British Garden Julep blends gin, garden pea syrup, lemon juice, freshly picked mint and ginger ale.

The Gardening Society runs from 27 May to 4 September 2016 at John Lewis, 300 Oxford Street London W1C 1DX. Bookings for the restaurant will open next week, with space reserved for walk-ins throughout the summer. The roof garden and restaurant will open Thursday to Saturday, midday to 11pm (last entry 10pm), midday until 8pm Monday to Wednesday and midday to 6pm Sunday.