Notch takes over from Roofnic for this summer's rooftop bar 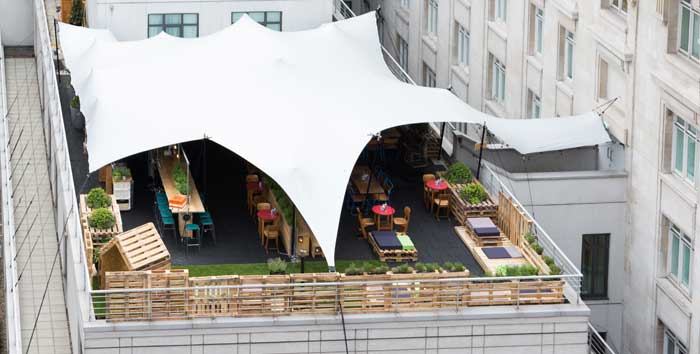 The transformation of the rooftop at the London Marriott Hotel Park Lane into Roofnic last year was a huge hit for the hotel - with queues snaking round the block. Now they've unveiled their plans for Summer 2016 and it's bound to be just as popular.

The space will be called Notch. Style-wise they're describing it as "Williamsburg Warehouse meets Berlin Yard Sale". In practice one of the key features will be a row of swings that look out onto Oxford Street below.

On the food front, Fudo Shack will serve everything from Spicy Buffalo Wings to Japanese street food snacks like Short Rib Steamed Buns and - god love us - a Sashimi Pizza made up of sliced tuna, anchovy aioli, wasabi tobiko, sesame seeds and coriander. There’ll also be a dedicated brunch menu served at the weekend.

As for drinks, there'll be all manner of cocktails in jars, schooners of craft beers, bags of wine and tuna cans (we kid you not) filled with readymade Negronis and Old Fashioneds.