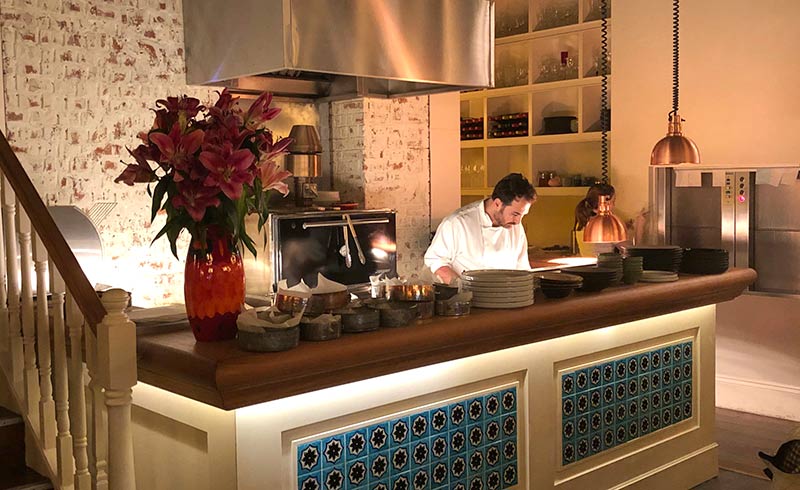 The chef himself, running the open kitchen.

What can you tell us about Yeni?

It's the first London restaurant from Istanbul chef Civan Er, who's had significant success over there with his restaurant Yeni Lokanta. Yeni in London aims to carry on the approach of the original - namely a modern approach to traditional Anatolian dishes.

In the heart of Soho. Just a few steps down the road from the original Polpo, it's taken over the spot that was vacated by the Soho Vinoteca. The nearest tubes are either Oxford Circus or Piccadilly Circus.

Where could we go for a drink first?

It's Soho so you're not short of options here. But based purely on immediate proximity, we'd say the Sun and 13 Cantons for a beer (also to scope out who's in residency on the food front there). There's possibly Graphic for a cocktail, but that can get a bit rammed, and Soho Grind is handy in the evenings too.

We had a seat for two by the window - and do think that's the best in the house. There's also a long table that you can share with other diners, but would be great for a large group of about eight. On the ground floor, you can see the chef in action - Civan Er himself was there when we visited. Oddly he's there all on his own (see above), with the other work done behind the scenes. It's a prime spot and we think diners might like to see more people from the kitchen showcased up front.

We have to address the elephant in the room first - it's not on the cheap side. It's certainly priced higher than nearby Soho stalwarts - but it's possible that time will see those prices adjusted. The menu is a combination of small plates and larger sharing dishes. We were advised that two or three starters and one large dish would work for two of us - here's what we had on the night: 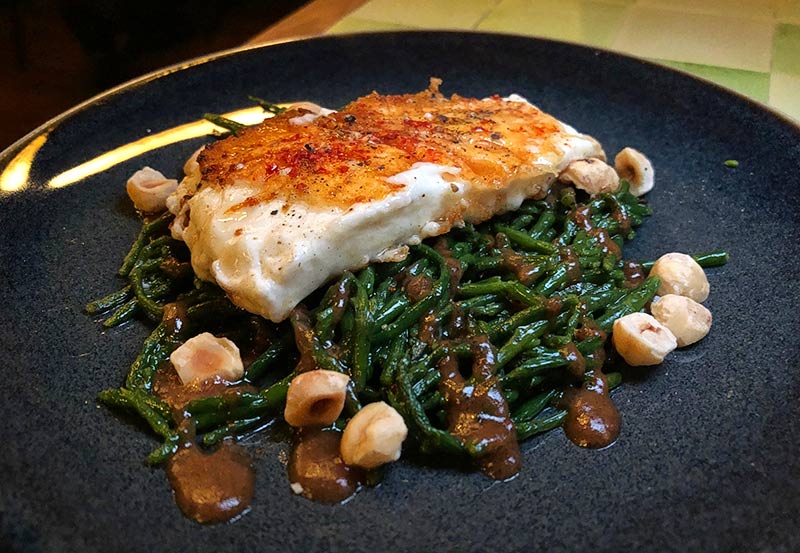 Easily the star of the show - pan-fried 12-month-old feta, samphire, spiced honey, hazelnuts (£12). A near perfect mix of ingredients for us - that feta and the samphire are matched well. 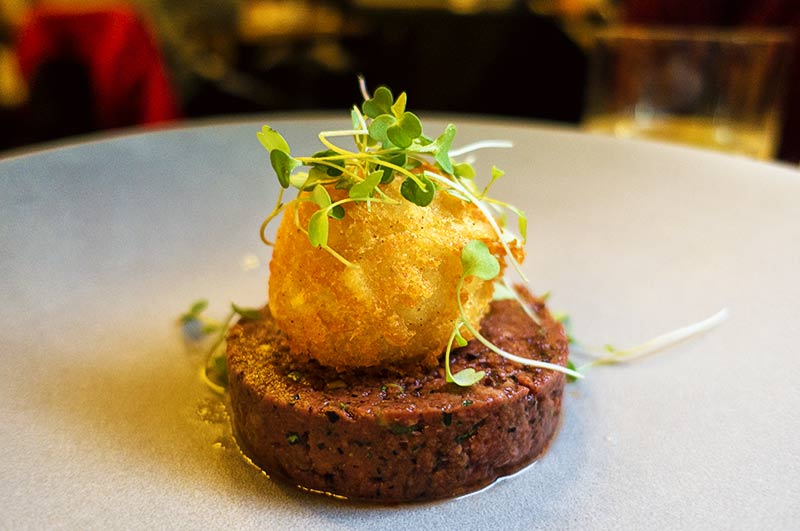 Ciq kofte tartare, sumac mollasses and what's essentially a lightly deep-fried egg on top (£16). Break open the egg to mix the yolk into the tartare - and that crunchiness really does add something. 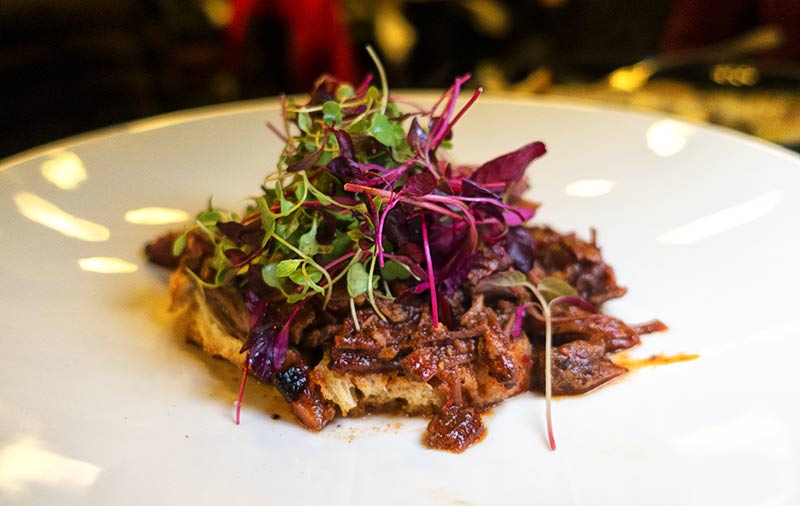 Roasted beef ribs, isot pepper, cumin on sourdough (£26). Loved the ribs, but the sourdough does get a little lost and soggy underneath that - it needs something a little more structural to support it, we think. 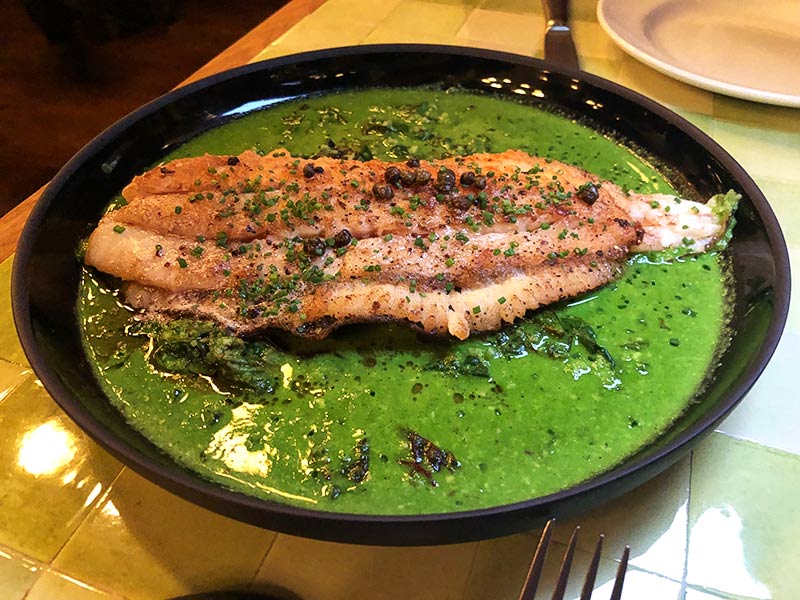 Pan-fried brill, hazelnut, pastirma, raki, prunes (£32). The priciest dish on offer, but also the largest by quite a bit - and more than enough for two to share, we think. And get some extra bread (or save some) for that sauce.

How is the menu for vegetarians?

You have plenty of choice here - albeit all from the smaller plates side of the menu, which was all vegetarian with the exception of a couple of dishes. Examples on our visit were "snow peas, green apple, mint, chilli yoghurt (£9) and beetroot, dried sour cherry, almonds, xigalo (£11).

And what about dessert?

We do think it's worth hanging on for at least one of the desserts - they're fairly light. They're not actually listed on the menu - you get told about these afterwards (honestly we'd prefer to see them on a menu rather than being put on the spot). Here's what we had: 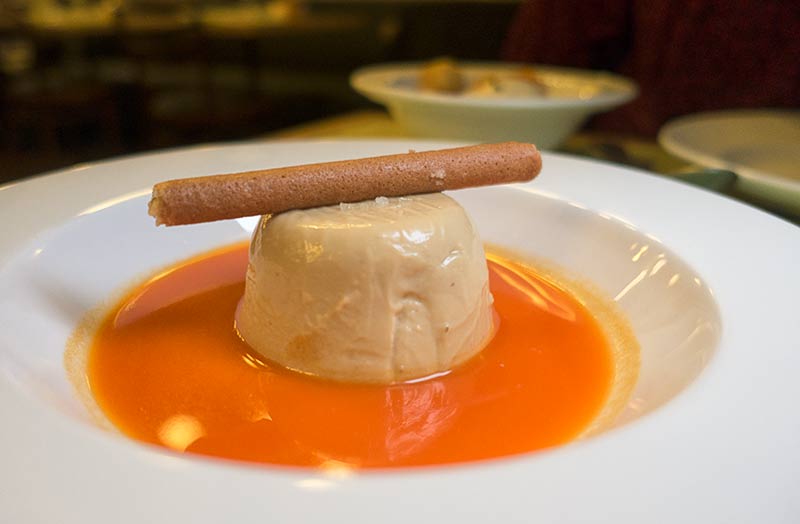 The dessert winner - the salted caramel pannacotta with pumpkin sauce (£9). Because we love a good pannacotta and this got the consistency just right (and the pumpkin sauce worked well too). 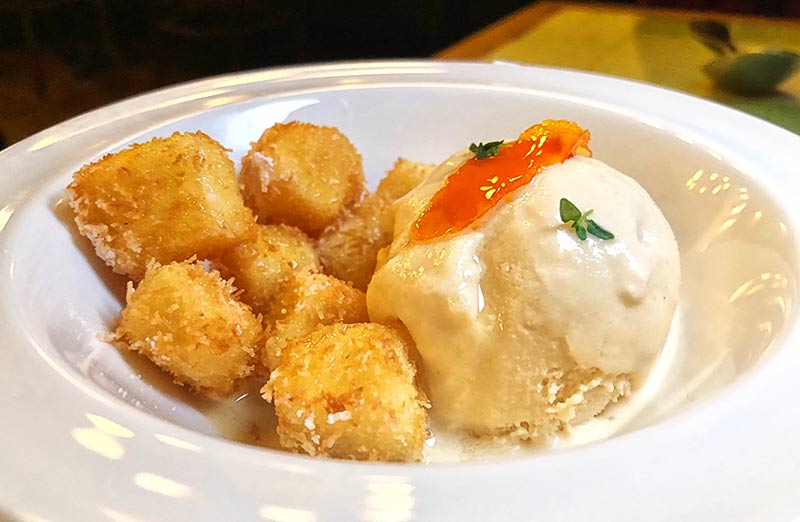 The wine list is where price comes into it again - it's definitely punchy. The house wine - Greek Atma white 2017 is £29 - and the list rises steeply from there. It's a relatively short list (about 15 reds/whites each) but it hovers around the £40/£50 mark generally - where it needs more choice in the late twenties at least. That Greek Atma is well worth a look though.

Leaving the issue of pricing aside, we really did enjoy Yeni. There's a lovely buzz to the room, which with its high ceilings, large windows and exposed brick walls makes it a very welcoming room. The staff are lovely and we loved what we ordered. If you're OK with the pricing, then it's an easy recommendation. If not, go but maybe rein in the ordering. There's definite promise here and we hope it succeeds.

Hot Dinners ate as guests of Yeni. Prices are correct at the time of writing.