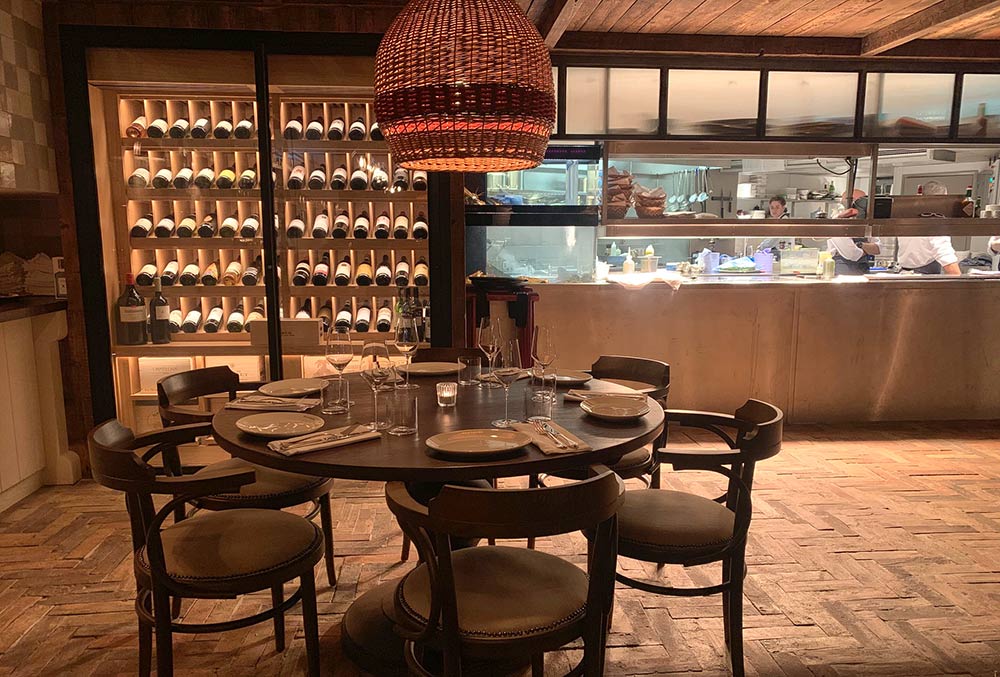 The sole table by the kitchen - and you can see a tiny bit of their beautifully done ceiling in this shot.

What can you tell us about Wild Tavern?

First off, it's from the same people who brought you Goodman, Burger & Lobster, Beast, Zelman Meats and the late (and much-lamented) Rex & Mariano.

Of all those restaurants, Wild Tavern sits in the higher-range bracket - its position in the heart of Chelsea should give that away, and it cherry-picks parts of what they've done best in their other restaurants, giving it all a light Italian makeover. So there are some excellent seafood dishes and the steak is absolutely on-point, and there's also the addition of pasta (where lobster makes an appearance). In many respects, it takes the best of what they've done before and repurposes for the local well-to-do local market.

They have a corner site at the bottom of Elystan Street, just off Chelsea Common (Kiru was in the space before). If you're heading there on the tube, it's about a 5-10 minute walk from Sloane Square.

Where could we go for a drink first?

The best bar nearby is the speakeasy-style Barts, but personally we think that your best option is coming to Wild Tavern itself, which has a bar that seats 10. There's a short cocktail menu (all around the £13-£14 mark) and the cocktails were excellent. They make a spot-on vodka martini (always a good test of any bar) and it does seem to be attracting locals for the odd drink. The bar shelves are lined with their own bottled cocktails, so you won't be waiting long for a drink. 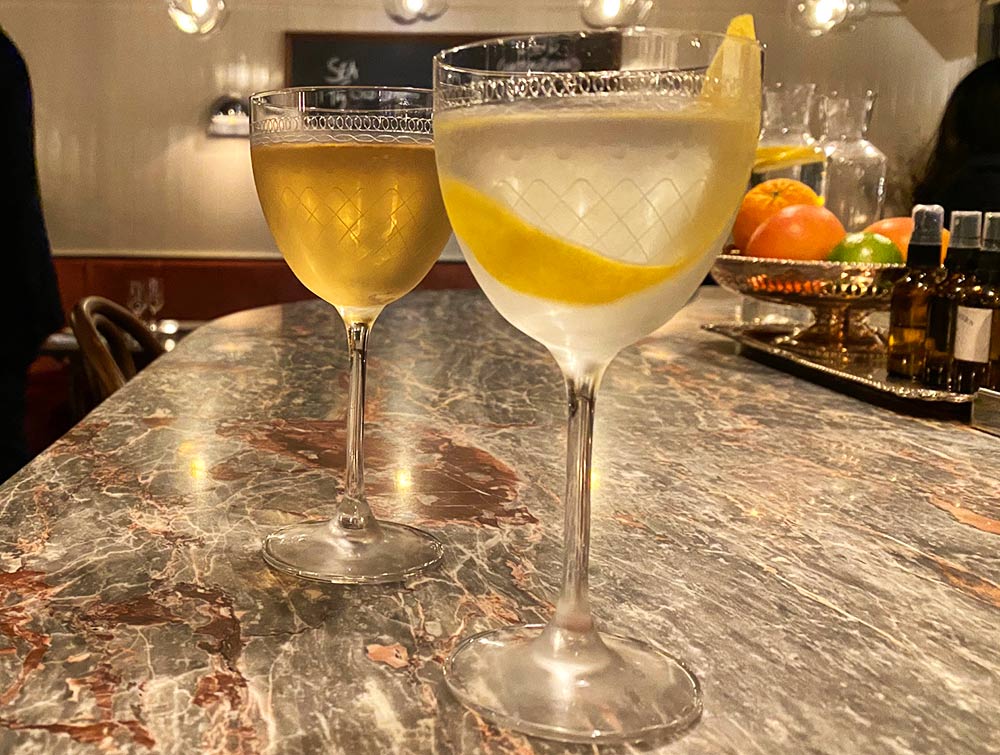 What's the room like and where should we sit?

We're a big fan of the design at Wild Tavern, particularly loving the pared-back wooden ceiling which looks amazing (you can see the tiniest glimpse of this in the pic at the top of this piece). The room is dominated by a central open fire in the middle of the room (handily disguising a support) and there are booths around the edges of the room which are probably the best seats. Alternatively, there's a semi-private table in front of the kitchen seating around six (see above) - that's a good bet if you want to be well away from the earshot of anyone.

And what about the menu & what should we order?

The menu is ostensibly Italian influenced - so it's split into the raw bar and starters (think aperitivo), pasta and grilled fish/meats for the mains. We think you'll want to dot around the menu so we'd say that (assuming two people eating) you are best having 2-3 dishes from the raw starters section at least (there are some real winners there). After that - if you're in for the full experience, share a pasta dish and then share either one of the large seafood or steak cuts.

As for ourselves - here's what we went for: 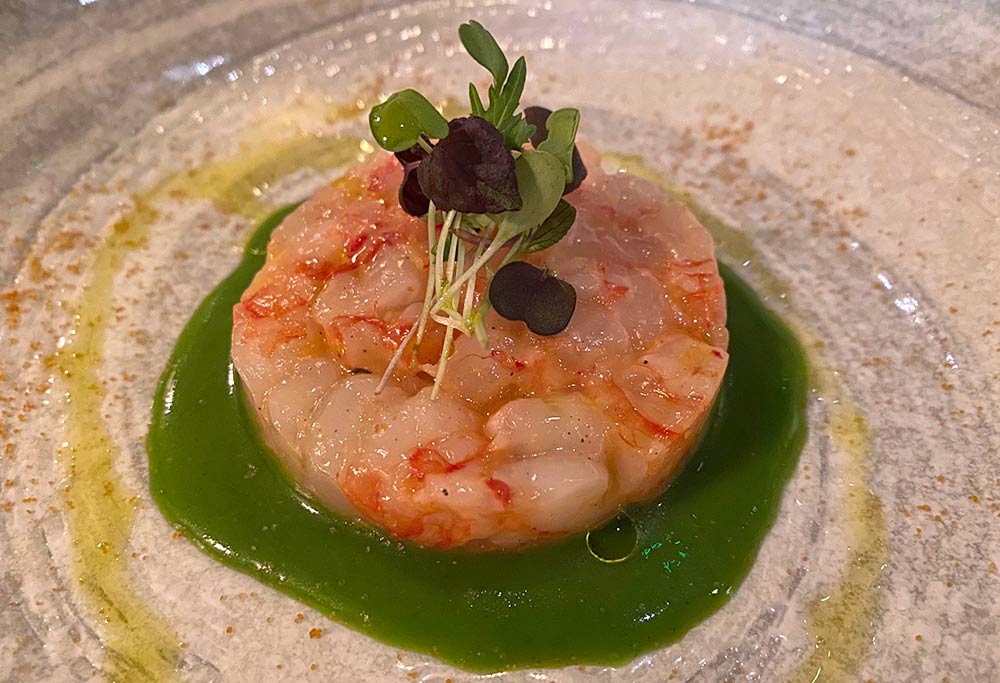 Tartare, Sicilian red prawns (£19). Since they first really arrived on the London dining scene at Rex and Mariano, red prawns have been celebrated wherever they've appeared. And this tartare of raw red prawns is an absolutely drop-dead spectacular dish. An absolute must-have. 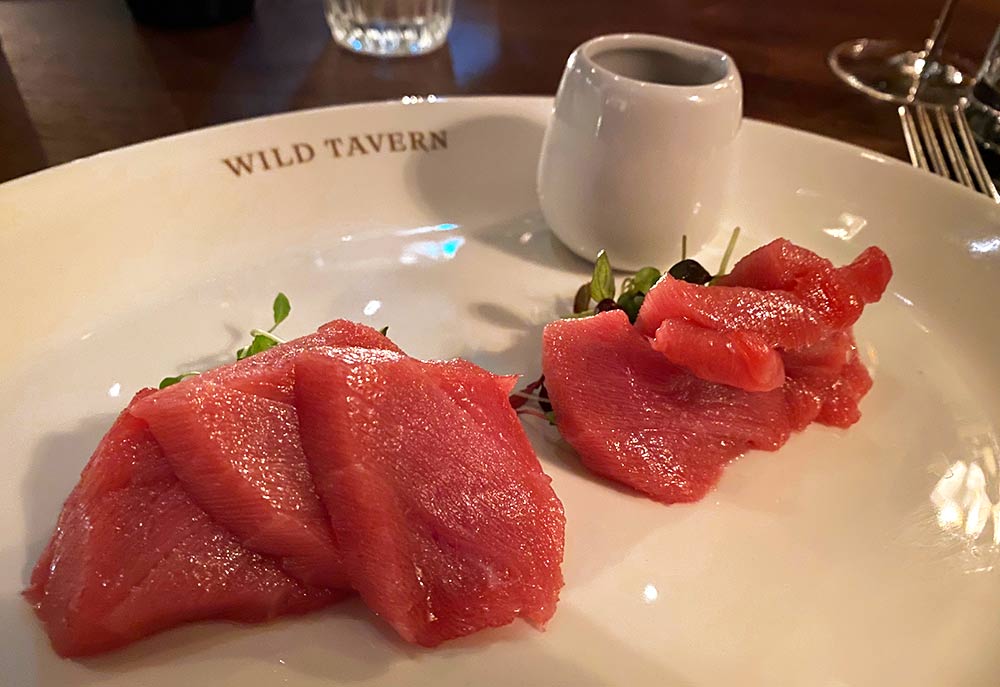 Sashimi, Spanish tuna belly (£23).Their sashimi game is strong. It's such a cliché to say something "melts in the mouth" but this tuna really does. 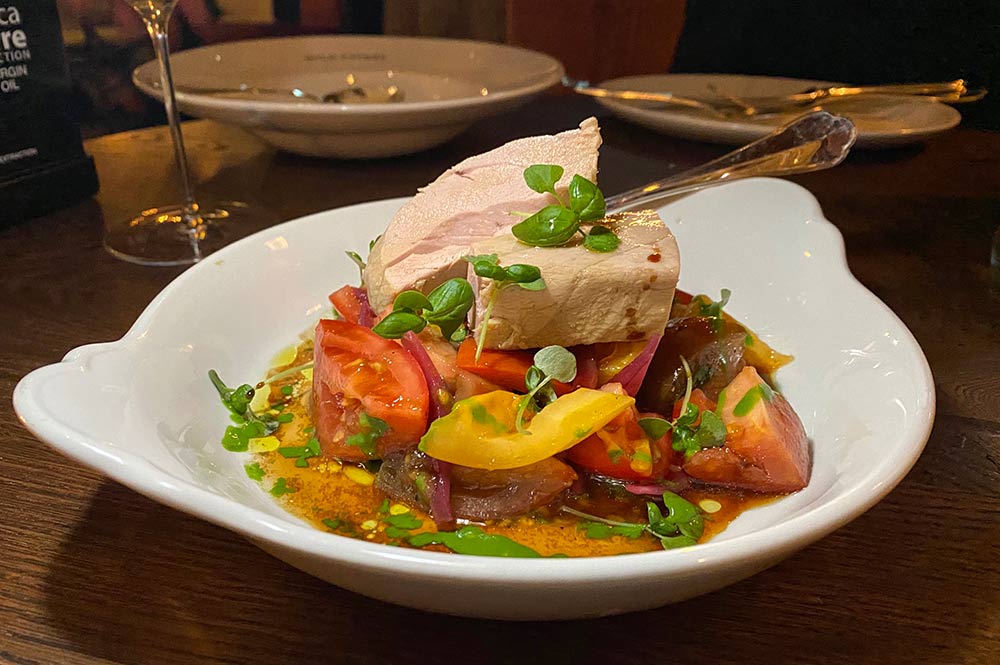 Tomato Salad with home made tuna Ventresca (£23). We're suckers for a tomato salad at any time of the year. 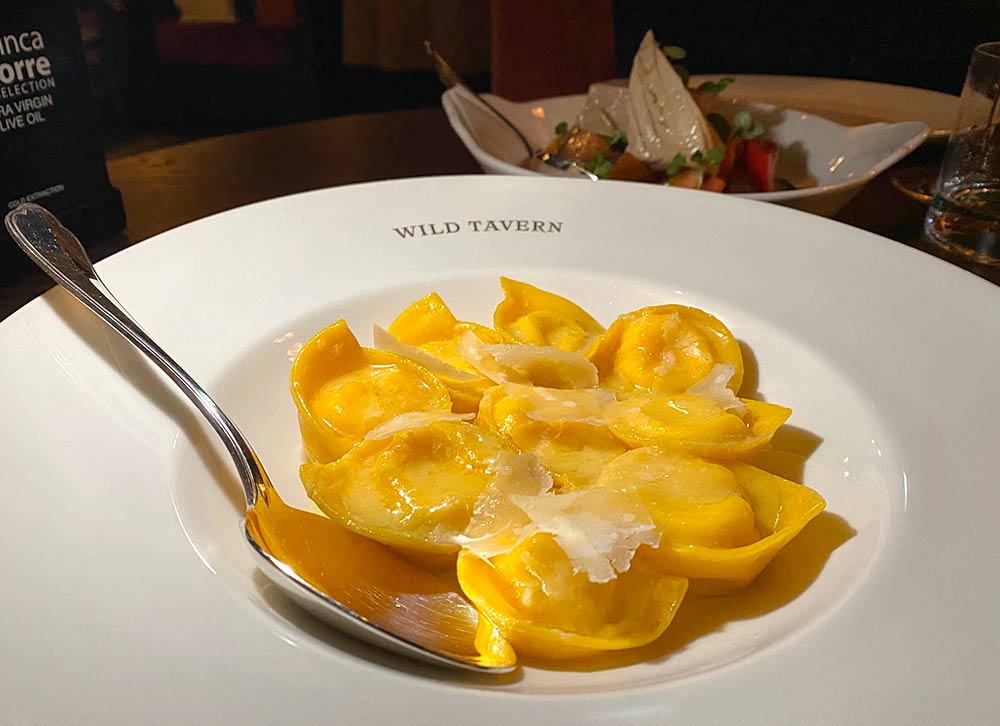 Home made tortello with ricotta and lemon (£18). The tortello and taglioni are made in house and this dish, in particular, was a revelation. A textbook example that if a pasta dish is made well enough, simple ingredients are all you need. 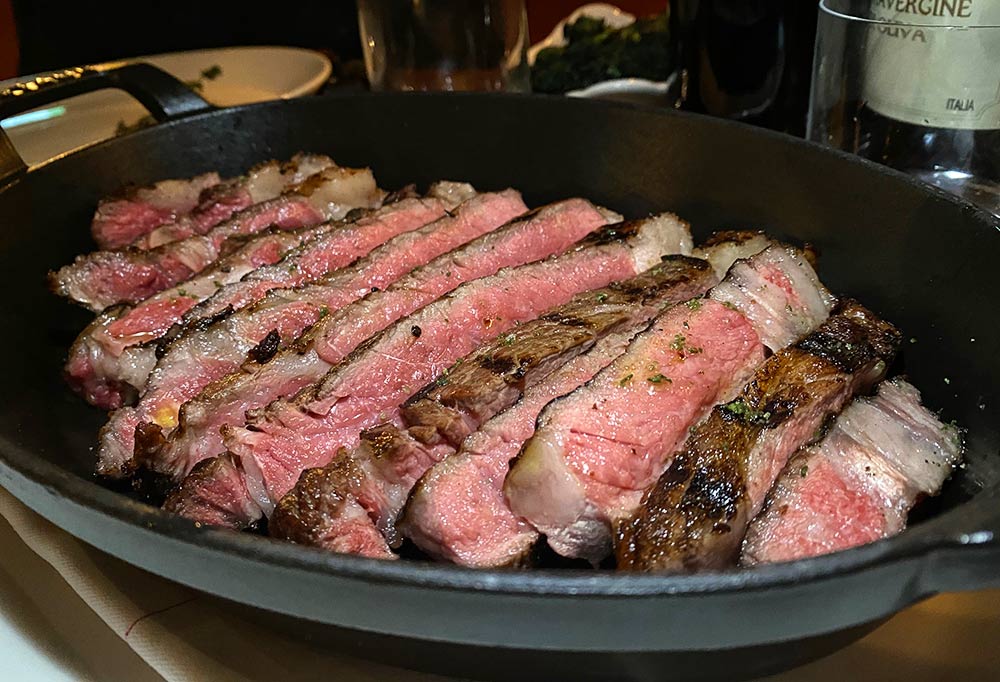 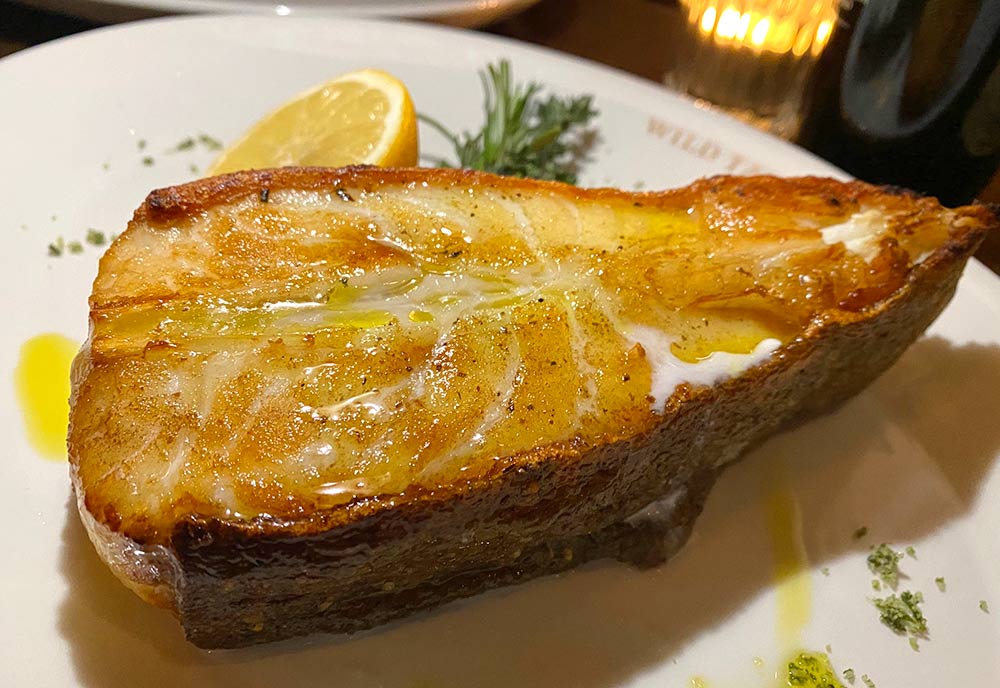 Cornish Turbot steak (300g - £42). The steak was always going to be a winner - but this grilled turbot showed as much skill on the seafood. When it's supplied by one of London's best fishmongers, just across the road, that's even better. 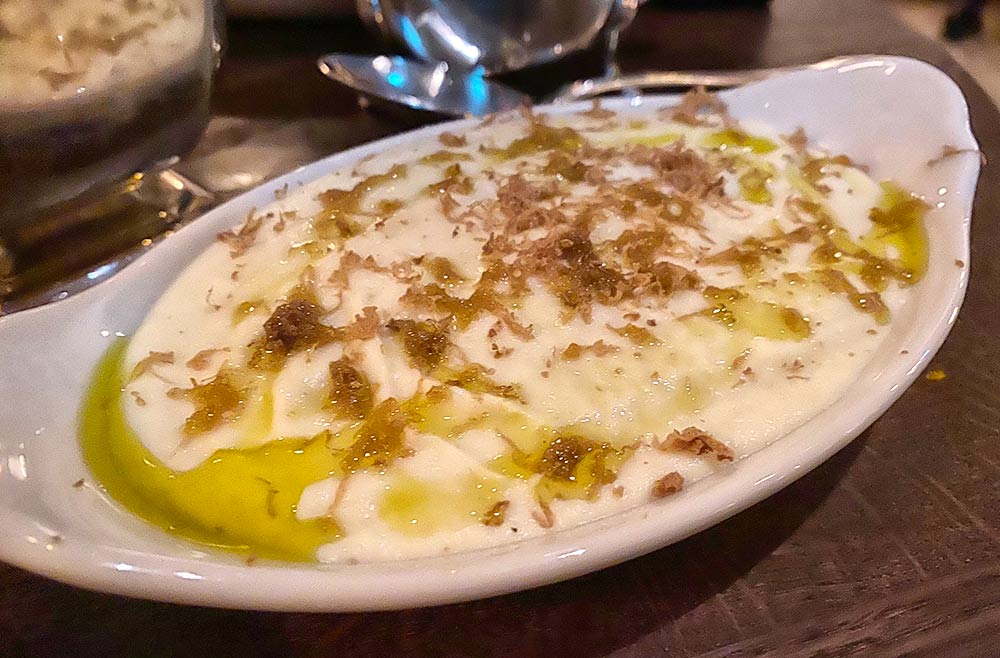 And as a side - cauliflower puree with white truffle (£10). Something light that matched the two dishes above well.

And how would vegetarians fare?

We'll be honest - meat and fish really are the order of the day here. Your best bet is going to be in the pasta section. The above tortello was pretty amazing, but there was also a taglioni with fresh white truffle that sounded pretty good  (albeit at the pricey end of things at £43).

Anything else worth mentioning on the menu?

There's a lot we didn't get round to - but one item, in particular, stands out. That's the linguine with whole 800g Canadian lobster. At £80 for two people, it's very much at the high point of the prices on the menu. To be honest, we think there are far more interesting options available - but here's a look at the dish all the same:

Barely. We couldn't finish the steak (hooray for doggie bags) but the short dessert menu with a distinct Italian focus (Sardinian cannoli and Croccantino) had one thing that really stuck out - the Napoleon cake. Mind you that may have been because it was resting on one end of the bar all night, tempting us... 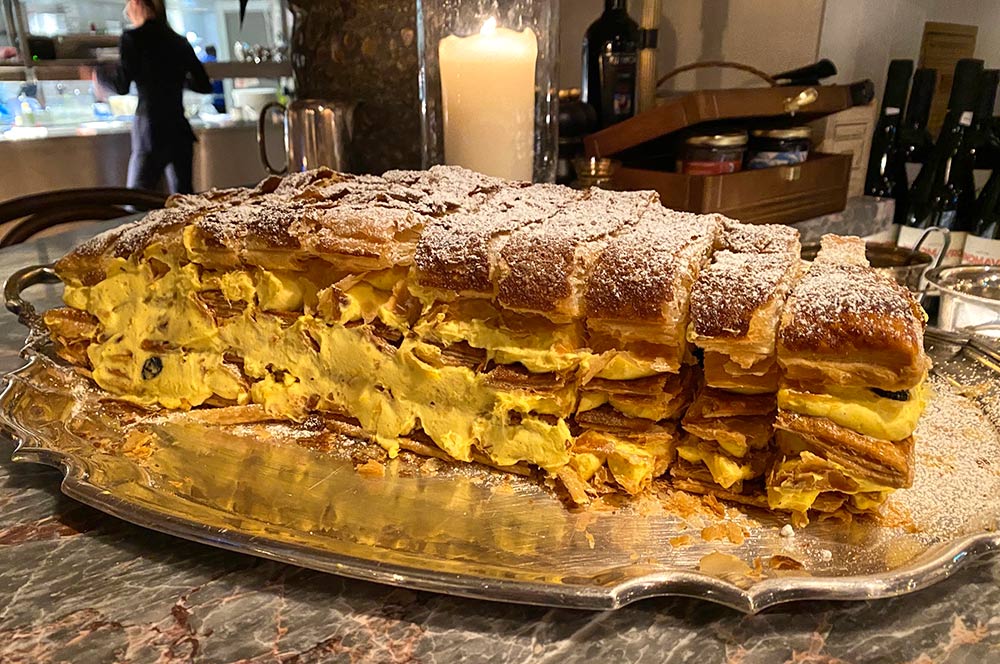 The Napoleon cake with rum and raisin, placed on the Wild Tavern bar. Each slice of this was £12 but easily enough to share. Best described as a light custardy millefeuille, it's actually a perfect way to end the meal and not too heavy. Plus there's custard and boozy raisins in this, so we were very happy. Definitely leave room for some.

With Crispin in charge of the wine list (he was the fellow who built Goodman's first wine offering and did the same for Pitt Cue) you can expect a really interesting selection of wines. We had a stellar bottle of white from Domaine de Vilaine which is owned by the co-manager of the Domaine de la Romanée-Conti, so that gives you some idea of how good it was. It was £72 and - if your budget stretches to it - worth every single penny. There's also plenty of interesting wines by the glass courtesy of their Coravin machine. But, as you might imagine, given the location there isn't much south of £50 on the list.

We really enjoyed Wild Tavern. It's clearly popular with the locals, so there's a lovely vibe to the place, and the food was excellent throughout - with some real showstoppers like the red prawn tartare. That's all backed up by an excellent wine list. If you love Goodman - and miss Rex & Mariano - then this will be right up your street.

Hot Dinners ate as guests of Wild Tavern. Prices are correct at the time of writing.