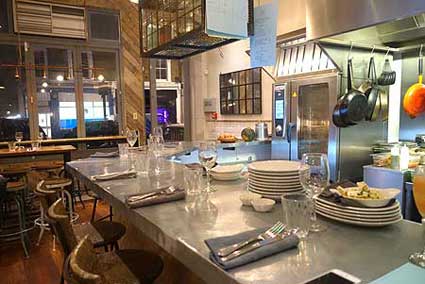 What do we need to know about John Doe?

It's an East London style wood-smoked joint implausibly set in West London. Everything in the kitchen - ovens, grills etc is fuelled by sustainable English charcoal and wood. The four blokes who run it Tom, Paul, Mark and Nick are crazy about game, but wanted to run a place that was modern rather than stuffy. They say their food style is influenced more by the methods of cooking than a particular region or country, "we look more at how well food responds to the heat, and the techniques like brining, curing and smoking that help to bring the best out of ingredients." As the name suggests, there's a focus on deer with the meat the night we were there sourced from the Cotswolds.

At the top end of Golborne Road, off Portobello. The nearest tube station is Westbourne Park.

Where should I meet friends for drinks first?

We're not experts around these parts, so we also popped in for a drink at newly-opened West Thirty Six just up the road. That's got plenty of spaces for drinkers, including a few outdoor terraces and if the chaotic service we had improves, it's probably a decent place to meet.

The most fun you'll have - and certainly the warmest spot on a chilly winter night - is up at the counter, opposite John Doe's wood burning stove, Bertha. But if you're in a larger group, there's plenty of space in the airy downstairs dining room and the back room of the ground floor has some nice tables for four.

So what should we eat?

Go easy on the delicious bread and charcuterie, as you're really going to want to wade your way through the whole of this menu. We kicked off with a gorgeous plate of grilled octopus served up with chickpeas and proper homemade aioli (£8) and this was followed with the dish of the evening - leeks with capers, lentil and tarragon dressing (£6). How do they get simple leeks to taste so good? Well they rake over the wood at the end of the night, lay down the leeks and leave them there cooking low and slow all night, scraping off the charred outside layers till all your left with are the sweet insides, smoke cooked to perfection.

Of the main courses you ought to try the beer butt partridge (£17) if it's on. The beer keeps the tiny bird moist when roasting but it's the accompaniment that we really rated - an amazing mac and cheese made with honking Stinking Bishop. Another dish of roasted bacon served on a heap of slow baked brown beans (£15) defeated us in the end, but we got them to box it up and it made an excellent brunch dish the next day.

Desserts might seem incidental in a restaurant devoted to smoke, but our rice pudding with slow cooked rhubarb (£6) felt designed to finish the job of sending us out into the cold night, warm to the core.

There's a small selection of seasonal cocktails - but ask if that's all that's available as we ended up with a great, off-menu rhubarb bellini to start. We didn't realise, until we checked back on their website that craft beer was a big thing - all we saw was the wine menu. We enjoyed a decent Picpoul for £27 but it sounds like you should probably have a go at their beers too.

This really feels like a departure in food styles for this part of London - and the fresh, gutsy cooking makes it worth crossing town for. But the rapidly changing menus and warm service will make John Doe a place to return to regularly if you're lucky enough to be a local. Just don't forget to order the leeks - hands-down London's best vegetarian dish at the moment.

Hot Dinners ate as guests of John Doe. Prices were correct at the time of writing.