[SIGPLUS_EXCEPTION_SOURCE] Image source is expected to be a full URL or a path relative to the image base folder specified in the back-end but /blog/2013/wabi/gallery is neither a URL nor a relative path to an existing file or folder.
0
Shares

We try out the Kaiseki tasting menu at Wabi 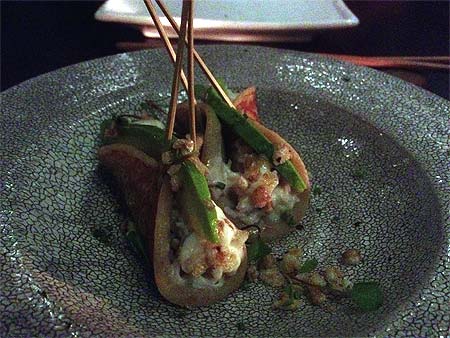 What can you tell us about Wabi?

Wabi has taken a somewhat surprising route to London. Having originally found fame in Horsham, it only recently opened up a London outpost, just a few steps from Holborn station. It's a contemporary Japanese restaurant, overseen by Head Chef Scott Hallsworth who has had experience in both the London and Melbourne Nobus. Wabi's a basement restaurant, but despite being hidden underground it was pretty buzzy on the Tuesday that we went on which is a good sign.

It's one of the very few upmarket restaurants within easy walking distance of Holborn, so if you're looking to entertain in the area, this could be the place for you. We saw a bit of a mixed crowd here. Larger tables seem likely to be work/entertaining clients, but we also saw plenty of couples on tables of two, sharing the small dishes. And the Kaiseki tasting menu is definitely ideal date food.

Wabi has a pretty decent cocktail menu and, given the dearth of decent bars in the immediate vicinity, we think it's probably the best place to meet in locally - with a decent sized bar in the front of the restaurant (which also serves good bar snacks if you're just popping in for a drink). If you'd prefer to meet in a pub for a beer beforehand, the Ship Tavern around the corner may be pretty small, but it's worth a visit. There's also the Holborn Whippet for beers just a five minute walk away.

The tables at the back of the restaurant, watching the kitchen in action, look to be perfect if you fancy seeing just what the chefs are capable of - if you can persuade the staff to seat you there. We were warned off it on the basis of it would be too 'busy'. Alternatively you could sit up at the sushi counter itself, which might be a particularly attractive prospect for solo diners.

The menu's pretty large, covering breakfast (more along the lines of a standard British breakfast - it's attached to the Club Quarters hotel above) sushi, sashimi, and barbeque steaks. However, we opted to take on the new Kaiseki menu (a traditional Japanese tasting menu), which aims to showcase just what the kitchen can do. And it turns out that the kitchen is indeed capable of something quite special, delivering some quite brilliant food.

The Kaiseki menu is £75 per person for ten courses - all of a real high quality from start to finish and much of it with a sense of theatre too. A particular standout in this regard was the "crunchy temaki cone" course which lets you create your own mini ice-cream style cone from the constituent parts of toro, wasabi cream and a charcoal onion topping. Fun and delicious.

Other particular standouts were the scratchings with a light wasabi dip for the starter snacks, the "lobster and chips" with a particularly fine yuzu-truffle egg dip and the wagyu steak ishi-yaki, which turns up sizzling to your table in some incredibly sweet barbeque sauce. With all that and more - plus sushi of the day to finish - it was a meal of extremely high quality.

Our only caveat is that a tasting menu works best when the timing's completely up to scratch, and we have to say that's something the kitchen still needed to perfect on our visit (but we've been told that's currently in hand).

As we went on Pancake Day, we also felt that we had to try the kitchen's king crab and puffed soba pancakes too - which were as good as billed and showed that items off the tasting menu were equally worth trying.

It's definitely worth trying one of Wabi's cocktails before sitting down for your meal. We went for Wabi's version of the breakfast cocktail - with gin, bergamont, yuzu jam, orange marmalade and orange juice - a well made cocktail, but one which could be a tad stronger before it got our seal of approval. Better to go for the Bonsai Kitten which featured vodka, Akashi-tai Honjozo sake, Calpis and Lime Juice and really grew on us. We'd be back for another of those bad boys. Both were a reasonable £9.95.

The wine list is on the punchy side, however. A bottle of white starts at £26.50 for a Touraine Sauvignon Blanc - and quickly shoots up from there. We'd definitely prefer to see a few more options around the lower prices of the wine list. That said, sommelier Bernie Malloy (previously of Linsday House) is a real find - he steered us in the direction of some excellent Marlborough Pinot Noir with our wagyu which went perfectly.

Timings aside - this was a standout meal with some really interesting dishes coming out of the kitchen. There's clearly great talent working here - and the element of fun pricked any pomposity that a sushi-led restaurant in account lunch land might have. Plus, if the punchy price of the Kaiseki menu is offputting, you can always try a lunch set or bento box which start at just £15. In brief - Wabi's an oasis in an area not blessed with great restaurants.

Prices were correct at time of writing. Hot Dinners were invited to eat at Wabi.