[SIGPLUS_EXCEPTION_SOURCE] Image source is expected to be a full URL or a path relative to the image base folder specified in the back-end but /blog/2014/df-mexico/gallery/ is neither a URL nor a relative path to an existing file or folder.
0
Shares 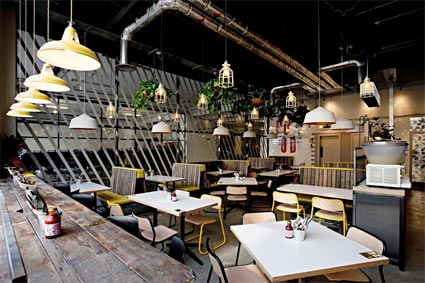 What should we know about DF/Mexico?

DF/Mexico is a casual Mexican diner from Thomasina Miers, her first new project since Wahaca. Thomasina travelled to Mexico City, New York and Chicago with her partner Mark Selby to research current Mexican food trends, resulting in a menu that feels fresher and more modern than the relatively traditional Wahaca.

At the old Truman Brewery on Brick Lane. It's located on the far corner of the building, with the entrance on Hanbury Street, not far from Rosa’s Thai Café.

There are plenty of great pubs around here including the Golden Heart and the Ten Bells – both great options for a casual pre-dinner drink. If cocktails are what you’re after, then Hawksmoor Spitalfields is only a couple of minutes walk away.

The restaurant is very laid back designed for quick in-and-out eating rather than long lingering meals. There’s a large communal table near the entrance, smaller tables dotted around the rest of the room, plus high stools for sitting at the window. When the restaurant is busy you’ll probably have to sit where you’re put, to be frank, but if you can avoid the tables right at the back near the toilets that would be our only preference.

The menu is split into several sections including Burritos, Tacos, Tortas, Salads and Sides all of which is fairly self-explanatory. Ordering is done Nandos-style (don’t worry, the Nandos comparisons end here) by grabbing your table, noting the number and going up to the counter to order and pay. This is a fine system initially but a bit tiresome if you want to go and grab more drinks and desserts after the first order.

Fortunately service is very fast, with plates arriving 10 minutes or so after we ordered. The American influences are plain to see on the menu, particularly the ‘Tortas’, New York style Mexican sandwiches in toasted brioche buns. We went for the Pork Pibil torta – marinated slow cooked pork with refried beans and guacamole – which tasted fantastic but could have been more generously portioned. Definitely get the extremely addictive chilli salt fries and chipotle mayo to go alongside any of the tortas.

A fish taco came as a thick piece of breaded cod wrapped in a tortilla and topped with red cabbage and chipotle mayo – almost a Mexican take on the fish finger sandwich and a definite highlight of the menu. Veggie nachos smothered in cheese, salsa and guacamole were as moreish and comforting as they should be and side dishes such as DF slaw and the cup of corn were also big hits.

For dessert there is only soft serve ice cream with a choice of three toppings but it’s very good indeed. We went for raspberry and popping candy on one and dulce de leche with candied peanuts on the other and we’re still undecided on which one was more delicious.

Mexican beer such as Sol, Modelo and Pacifico are on offer but it’s also nice to see some local options, including a pale ale brewed specially for DF by the Brixton Brewery. You’d be completely loco not to try the frozen margaritas, however, with a raspberry and hibiscus version we tried being a particular favourite.

Everything here was of great quality, fresh and flavoursome. We really enjoyed the diner setting and the modern style of Mexican food and with the restaurant packed on opening week, it looks like its already proving popular with everyone else too. DF/Mexico is casual, cheap and cheerful and therefore perfect for an area where food-savvy folk are looking for a quick bite that isn’t yet another burger and fries. Will it be the next Wahaca? Watch this space.

Hot Dinners were invited to eat at DF/Mexico. Any prices were correct at the time of writing.