[SIGPLUS_EXCEPTION_SOURCE] Image source is expected to be a full URL or a path relative to the image base folder specified in the back-end but /blog/2014/holborndining/gallery is neither a URL nor a relative path to an existing file or folder.
0
Shares 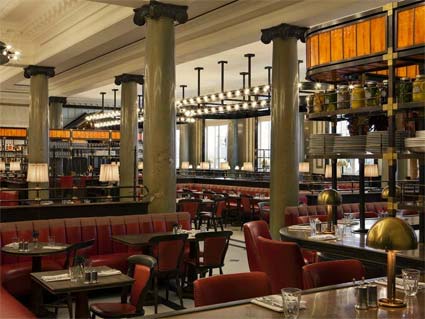 What can you tell us about Holborn Dining Room?

The restaurant comes from Des McDonald, who most recently brought us the Fish & Chip Shop in Islington. However, his 20 years at Le Caprice will be most useful in this huge dining room, which will be the main restaurant for the Rosewood Hotel. It takes the space that previously held Pearl, but opens up the area while also adding a raw bar, a large bar area and a deli (which can be accessed straight from High Holborn). The focus is on brasserie food with a British influence.

It's at the top end of High Holborn, as part of the massive new Rosewood Hotel - and about a two minute walk from Holborn station.

The main bar for the Rosewood hotel is Scarfe's and it has quickly become one of our favourites in London, so we'd always recommend a visit either before or after your meal (particulary for their excellent cocktails). Otherwise, your best bet is to come into Holborn Dining Room where there is also plenty of space to have a drink. There's precious little else in the immediate area, so either of these are your best bets.

The restaurant is absolutely huge - but we'd say any of the corner tables which look into the main room would be our recommendation. However, we really did like the look of the raw bar and would sit there next time (it wasn't open for seating on the night of our visit).

Being a brasserie, the menu covers quite a few areas - but choice within those is thankfully not too onerous. There's a charcuterie section from which we had a generous helping of native nape for £8.50 - and there's a British charcuterie board for £18.50 too. Starters are split into those from the hot or cold counter. From the cold, we had an excellent pressed ham hock with picallili and sourdough (£7.50) which was notable for being served at a perfect temperature (not too cold) and a decent fried squid which came with a wonderful gentlemen's relish mayonnaise that we might have to try making ourselves.

We bypassed the crustacea counter (with a mixed seafood platter for £37) and went straight to mains. There we went for their "hock and coq pudding" - one of their signatures (£14.50). It's large on taste but pretty small and looks a little bare on the plate by itself (we think it would be better if it came served with the excellent parsley sauce on the plate rather than as a side). But it's surprisingly filling. Our other mains -  Cornish slip soles, served with brown shrimp was a generous portion of perfectly cooked fish.

For dessert, the boozy sherry trifle was good (but suffered by comparison to a seriously alcoholic version we normally make at home to Delia's recipe) but it was the Bakewell Tart made from puff pastry and served with raspberry ripple that went down particularly well - a definite recommendation if you're going.

For the full menu from our visit - check out the gallery below.

We started off with a couple of decent cocktails - the fire side sour (tonka infused vodka, apricot liqueur, lemon and lime juice, angostura bitter and egg white - £9) being the best. Most of the cocktails were around the £8-£10 mark, while the wine starts at £19.75 a bottle, with a good seelction available under £30. However, glasses were served as 125ml - something that's well suited to a wine bar or Soho restaurant - but not to a hotel restaurant (in our opinion), We hope they at least add some carafe options here.

As we've mentioned above, we've been fans of the Rosewood since first visiting Scarfe's bar. The Holborn Dining Room should do well in midtown with its dearth of good, buzzy restaurants. The food is straightforward, the service surprisingly accomplished for such a full restaurant merely days after opening (it helps to have the masterful Jon Spiteri managing front of house) and the rooms looks wonderful. If you're passing by, pop into the deli for a quick nose into the main restaurant.

Prices were correct at time of writing. Hot Dinners ate as guests of Holborn Dining Room during their soft opening period.