[SIGPLUS_EXCEPTION_SOURCE] Image source is expected to be a full URL or a path relative to the image base folder specified in the back-end but /blog/2014/lyles/gallery is neither a URL nor a relative path to an existing file or folder.
0
Shares 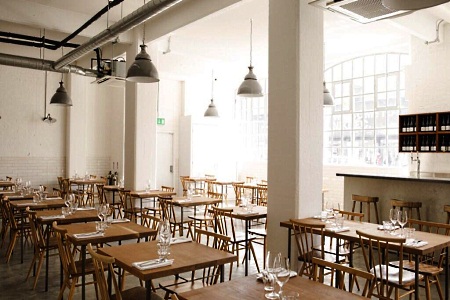 Two former St John Bread & Wine alumni James Lowe and John Ogier have opened a restaurant in Shoreditch, backed by the folk behind Trishna and Gymkhmana. Those are the bald facts, but for anyone with a deeper appreciation of the London restaurant scene, this is one of the most-anticipated openings since The Clove Club just over a year ago.

Both James and The Clove Club's Isaac McHale were once part of a group called The Young Turks. Their pop-ups were legendary as was their time doing Upstairs at... in Spitalfields, but when Isaac went off to open up The Clove Club with Daniel Willis and Johnny Smith, James struck out on his own looking for a site to open.

So where did he find?

This is a former events space in the Tea Building in Shoreditch so it's beside Pizza East, just downstairs from Shoreditch House and across the road from Shoreditch overground station. Very handy in other words.

If you're not lucky enough to have Shoreditch House membership (us neither) you could try the rooftop bar at Boundary - if there's not a massive queue - or the bar at nearby Dishoom. Or there's always The Owl and Pussycat on Redchurch Street.

This is a lovely dining room - pared down but full of natural light. There's an open kitchen, so if you like checking out the chef action you'll want to be facing this. We initially couldn't work out why the wood floor and concrete walls weren't forcing us to bellow to be heard, until Lyle's GM John pointed out the cunningly hidden acoustic panels in the ceiling. Net result - a buzzy, but comfortable room to eat in.

God, yes. It's included and is their own sourdough with homemade salted butter. Absolutely delicious and you're going to want some of it to wipe the plates clean later in the meal.

The concept will be familiar to anyone who's eaten at a Young Turks event or Upstairs at... Dinner here will be a set menu only for £39. If you have any dietary restrictions, they'll take this into account and every dish can be replaced with a vegetarian option if needed. Lunchtimes will be more relaxed with a range of dishes on offer that you can pick and choose from. Lyle's is open all day so in the morning expect pastries and a rotating house coffee. The menu will change regularly so, while we'll tell you what we had so you can get a feel for the food, don't expect the following to necessarily be on when you go - and that's the beauty of it. You'll want to keep going back to try new things.

Our dinner started out with two mini oxtail pasties, the shortcrust pastry made with beef fat so it just melted away. Then came a plate with two squares of ox liver that had been marinated in damson juice to give a hint of fruit against the liver and chargrilled asparagus with knobs of gritty walnut mayonnaise.

From here we moved into larger plates - first a bowl of startlingly green ransom soup with a sous vide pheasant egg draped over with cured pig cheek. Then we had a plate of lamb sweetbreads with nettle and sheeps milk yoghurt to dip them into. By this point every dish had wiped completely clean with the bread before it could be allowed to go back to the kitchen. The aged dover sole - which came with collard florets and a cider butter - was the only dish to divide the table. One of us loved it for the meaty, partly gelatinous texture which five days ageing had given it which was the reason the other one didn't love it. The mains finished with a bowl of baked Risely cheese served up with chunks of sourdough toast to dip into it and quite the nicest salad we'd had for ages of Chegworth leaves and a dressing made with Chegworth apple juice. Simple, but very effective.

Desserts started with a billed dish of a scoop of rhubarb sorbet paired with a scoop of soured cream. But we also had two gooey rhubarb marshmallows too and even those were followed by two warm-from-the-oven brown butter cakes - a cross between a Madeleine and a financier but with toasted flour and brown butter instead of plain flour and normal butter. They're cooked to order at the end of the meal.

We ate during an early friends and family dinner, so there were only two wines on offer - we went for the Verdicchio which was so drinkable we sank two bottles of it. And at just £21 it wouldn't break the bank either. We've now seen a full wine list and everything will also be available as a 125ml glass or 500ml carafe. It's a succinct list of 20 reds and 20 whites - with nine bottles coming in under the £30 mark and topping out at £56 for a Le Grappin Savigny-les-Beaume, 2009 and £70 for Pommard, 2006, Chateau de Puligny-Montrachet.

It's pretty simple. Our recommendation is to eat here as soon as you can. As reservations open up it'll be a real bunfight to get tables, so lunch may be a better bet. And if all else fails even the breakfast coffee and pastries will be worth coming here for. Dinner for £39 is a complete steal for food of this quality and the front of house staff are as earnest and friendly as everyone in the kitchen. One of the key London restaurant openings of the year.

Prices were correct at time of writing. Hot Dinners ate as guests of Lyle's during the soft launch period.