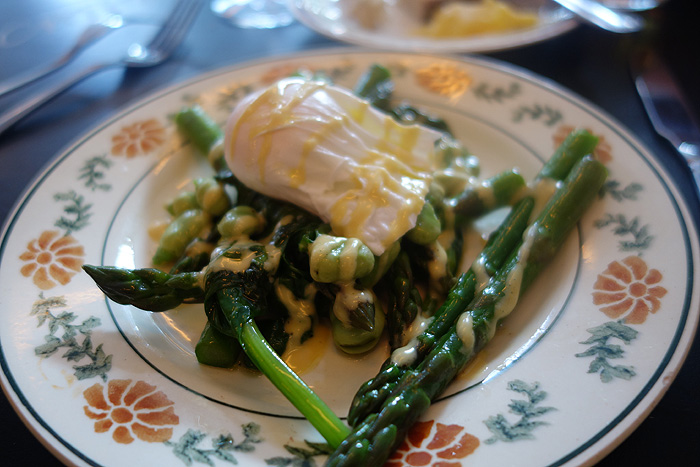 What should we know about Primeur?

It's a new neighbourhood restaurant with some very well-connected restaurant folk involved. In the kitchen is David Gingell former executive Head Chef of Wright Bros (by way of The Wolseley, Galvin Bistrot Deluxe and Bistrotheque) and Jeremie Cometto-Lingenheim who has worked for Jackson & Frank Boxer, Gabriel Pryce, Will Ricker, Keith McNally and for the Wright Brothers.

Either at the south end of Green Lanes or the north end of Petherton Road, depending where you're coming from. In its previous life it was a garage and is now a restaurant on the upper north east side of a mainly residential road, in the hinterland between Highbury, Canonbury and Stoke Newington.

Where should I meet friends for a drink beforehand?

Round the corner in The Leconfield on Green Lanes, a friendly gastropub with a good selection of beers on tap and a decent wine list.

Depends where you can get and what you're here for. If you're just after a glass of wine and a plate of charcuterie, you can perch up at the counter, or on stools at the rear of the room. Couples should aim for the counter running along the wall to the right as you go in. Otherwise there are two large communal dining tables and as there's no booking, you'll have to seat yourselves wherever you can find a space.

Dishes will change daily, but the menu should start with a few plates of charcuterie - we had a choice of three on offer, a Jesus sausage (£7), pork terrine (£8) and Jamon de Teruel (£8). The night we dined there were three starters or small plates and four main courses. But this is definitely somewhere where the early diner get the most choice - we were eating at 7 and just after we'd ordered two of the mains and one of the starters had finished.

Of the dishes we had, the standout success was the salt cod brandade (£9) which was rich and delicious and topped with a soft-fried egg. Asparagus with spinach, broadbeans and poached egg was a generous helping at £8.50 and really dwarfed one of our mains which was pork belly with Korean chilli paste - a gorgeous dish, but a pretty small portion for £13. Better was the confit duck leg with ham and peas which was a great early summer meal.

Word has already got out about some of the more interesting (and very well priced) wine that Jeremie is uncorking here at Primeur with folk coming from across London when he lays hands on a particularly good one. We were lucky enough to try a carafe of excellent Sicilian Grillo (£32) but there's plenty on the list to interest. It would be a quite perfect night to sit up here at the bar, with a plate off the menu and a glass or two from this list. A 125ml glass starts at £4.50 or you can have a Picon Biere or a Meteor beer.

A really interesting addition to an area not well served by good restaurants, Primeur is a new breed of neighbourhood restaurant which you'd be very happy to have open in your area, and mildly piqued by knowing someone who had the good fortune to live close to it. There's a certain air of chaotic bonhomie that'll probably shake down a little the longer it's open and the more locals get used to not being able to book or pick a table. We liked it a lot.

Hot Dinners were invited to Primeur. Prices were correct at the time of writing.