Watching the world row by at the Bingham 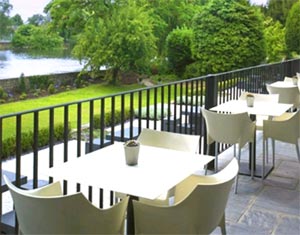 Earlier this year, in the announcement of the Michelin awards for 2010, there was a surprise new entry in the form of newcomers for London which had slipped under most people's radar. The Bingham, a boutique hotel in Richmond, had been awarded a Michelin star when many more famous central London restaurants has been left off the list. Invited to try out the restaurant, Hot Dinners took up the offer to find out how this restaurant, led by chef Shay Cooper, beat some of the big boys in the industry.

Arriving on a balmy early summer's evening, we approached the Bingham from the river. The hotel backs onto a really pretty section of the Thames and this is certainly the nicest way to enter the hotel (although the hotel could do with a few more signs pointing clueless souls like ourselves to the reception/restaurant).

Once we found our way to the bar upstairs we quickly managed to score a place on the balcony with a glass of Prosecco each. There can't be many more idyllic places to sip a glass of fizz in London, watching rowers gently making their way down the river. As we sipped our drinks, we spent a happy quarter of an hour jealously speculating just how much it would cost to live in the area. Luckily, when we were ready to eat, we only had to move a few feet along the balcony to our table which also overlooked the river (there are outdoor heaters set up for cooler nights). 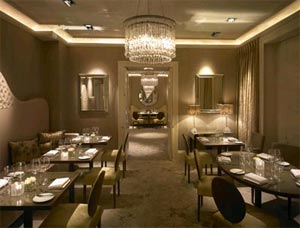 One clear asset The Bingham has, in addition to its location, is the new Maitre D', Jean Michel Thomas. Although he wasn't at the Bingham when he won its star, he knows a things or two about Michelin-starred restaurants having opened a load for Gordon Ramsay.

He'd just moved back to the UK from two years as Head Sommelier at the Burj Al Arab and was  brought in to help the restaurant get to grips with its new award. He knows only too well that if The Binham is to keep its star, the waiting staff needs to understand the demands of Michelin dining.

He's doing a good job - The Bingham certainly feels like a starred restaurant - with attentive, but not overbearing staff - and excellent attention to detail, although we would have liked the balcony tables to have had the same linen tablecloths as those inside.

What should I order?
The tasting menu, if you have time - bear in mind it should take about 3 hours.  Also - try to reserve a table on the balcony if you can.  The cheese plate's excellent too.

And of course, there's the food. Hot Dinners opted for chef Shay Cooper's tasting menu with matching wines. We started with cauliflower risotto served with lobster jelly, tarragon and lobster dressing. Following that was organic salmon cooked to perfection with courgette and basil resin and then a dish of roast quail with leek, potato and artichoke salad. Next we had a heavenly slow-cooked suckling pig, with chargrilled fennel, granny smith apple and macadamia nut dressing.

We followed this with a really excellent cheese selection, then just about made room for two desserts - a coconut rice pudding with pineapple carpaccio and a fabulous Amedei chocolate tart. Oh, and a plateful of decent truffles.

Three hours later -  take note that if you're going to choose the tasting menu, you're in for the long haul - we were done - full and very happy indeed. The food at the Bingham is excellent and given that London's not that long on restaurants with buccolic views, it's definitely a good choice for a special occasion, even, dare we say it, the perfect somewhere to pop the question.

Read what the critics thought of The Bingham.