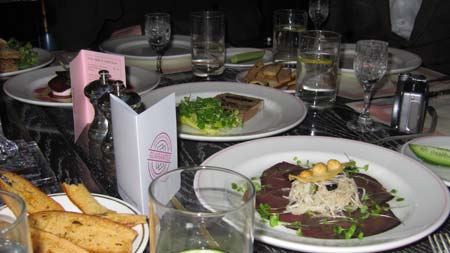 When someone invites you to a Vintage Vodka Tasting you should always say yes – but what you should also do the minute you accept such an invitation, is to block book two days off for the post-tasting recovery period. That’s one of the key lessons we learned from our trip to BobBobRicard in Beak Street last week for the tasting in question.

Our hosts were BBR’s co-owners Leonid and Richard who had opened their marvellously OTT private dining room to a gathering of some of London’s top food writers and bloggers, The Guardian’s Tim Hayward, Restaurant Magazine’s Stefan Chomka, Eat Like a Girl, Chris Pople from Cheese and Biscuits, Helen Graves from Food Stories....and Hot Dinners.

Told to arrive promptly at 7pm we duly turned up for what was described as a ‘formal sit-down event’ and were given a short lesson in how we were to taste the vodka. There was to be no faffing around trying to sip these drinks, Leonid told us. Nope, every vodka we would taste that evening would be downed in one followed swiftly by a forkful of the food BBR had chosen to accompany each vodka.

Over the course of the marathon drinking session that ensued we enjoyed the following: 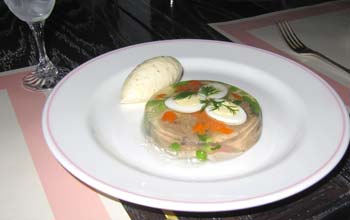 Vodka Kauffman Special Selected Vintage 2006
A single harvest vodka with a maximum of only 5000 cases per vintage. This vodka contained an infusion of honey and natural extracts of Magnolia Vine. It was paired with quite the prettiest dish of jellied ox tongue with whipped creamed horseradish, which was almost too good looking to eat. Almost.

Vodka Kauffman Private Collection Luxury Vintage 2003
Another single harvest vodka, this contains the infusion of dried wheaten crusts. Happily our accompanying dish was about as far from stale bread as you could imagine – we had caviar, blinis and sour cream.

Imperia by Russian Standard
This vodka is distilled eight times and uses a crystal quartz filtration for extra smoothness. It was served with salmon roe on hard-boiled quails eggs.

Beluga Vodka
A Siberian vodka which is made in a part of the world where no industry producing any flavour-affecting emissions is located within 300km - it came with quails eggs mayonnaise with anchovies. 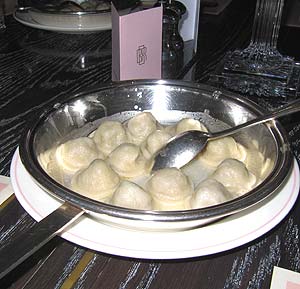 Vodka Beluga Gold Line
Beluga Gold Line apparently takes a month to filtrate, glaze and ripen – but the best thing about this vodka was what it came with simply divine Pelmeni – Siberian pork and chicken dumplings which quickly became our favourite dish of the night.

Vodka Stolichnaya Gold
A replacement for the now-departed Stolichnaya Cristall, this double-distilled Stoli was a bit of a sharp shock for the table. It may cost a fortune, but it was much harsher than the fabulously smooth, lesser-known vodkas we’d just been tasting.  This came with Salo – cured pork fat - on rye bread.

Vodka Elite by Stolichnaya
Our final vodka was another Stolichnaya and once again didn’t hit the heights of the earlier spirits. It was served with brined malossol cucumbers.

While our hangovers the next day might have been world-class, what Hot Dinners remembers, through the 40% proof haze – was the quality of the food we’d tried that night. BobBobRicard is turning out some seriously interesting dishes, and we’d go back tomorrow for those fabulous Pelmeni dumplings. There aren’t too many London restaurants – if any at all – where you can enjoy a taster portion of caviar for just £16.75 and that jellied ox tongue was just as pretty as a picture.