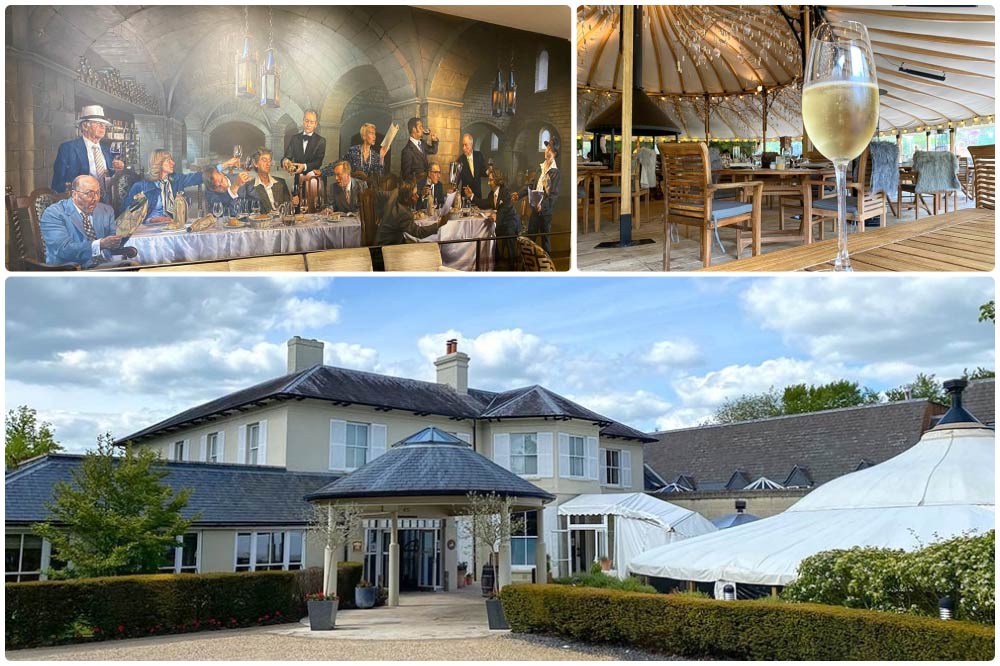 Here you can see the outside of Outside, just in front of the hotel. Also the mural in the bar depicting "The Judgement of Paris"

What can you tell us about The Vineyard?

The Vineyard is a five-star hotel and spa just outside of Newbury in Berkshire. Heading up its restaurant is a chef who trained up under John Williams at The Ritz. The hotel has an enviable wine cellar, featuring 30,000 bottles and recently created a huge alfresco space in their front courtyard. So there's a lot happening there at the moment.

Stockcross is just outside Newbury (about 10 mins by taxi) with Newbury itself a very straightforward 50 min train journey from Paddington. It's easy for both a quick daytrip or escaping from London and maximising your stay while minimising your travel.

So what about the restaurant?

There are now two restaurants where there used to be one.

Like many hotels and restaurants over the past year, The Vineyard had been exploring ways to create more alfresco space - while also taking into account UK weather. So, in addition to the hotel's main restaurant, they've also created "Outside" a second restaurant housed in a huge yurt-like structure, on the hotel's front lawn.

That restaurant has been there for most of the pandemic (apart from the times when the council, helpfully, makes them take it down and rebuild it). It's extremely weatherproofed (while still allowing that much-needed and legally mandated breeze to pass through).

Now that we can eat inside again, the main restaurant is back up and running. Essentially, inside veers towards more fine dining while outside is more of a laid-back small and sharing plates affair.

Who's in charge of the food?

That's Tom Scade who used to run The Mariners down in Cornwall before and after stints at The Ritz. He's looking after both menus here - Inside and Outside. 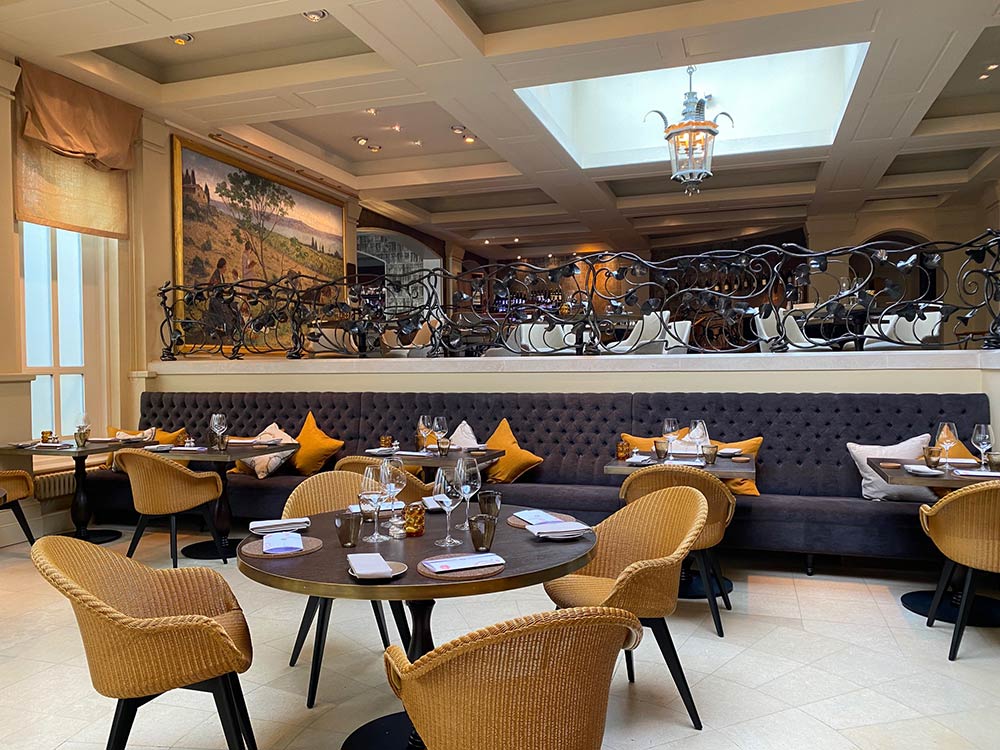 A look at Inside. The restaurant is split into several parts, including this airy pavillion.

Let's start with "Inside" - what's on offer there?

The restaurant inside is clearly the main focus of the hotel - delivering a high-end fine dining menu - but one that's served in a pretty bustling convivial room. The menu is a standard three-course a la carte affair - starters in the £12-£24 range, and mains from £22-£35. There's also a strong focus on local sourcing, with Berkshire lamb, pork and trout all making an appearance.

Here's a taster of that menu: 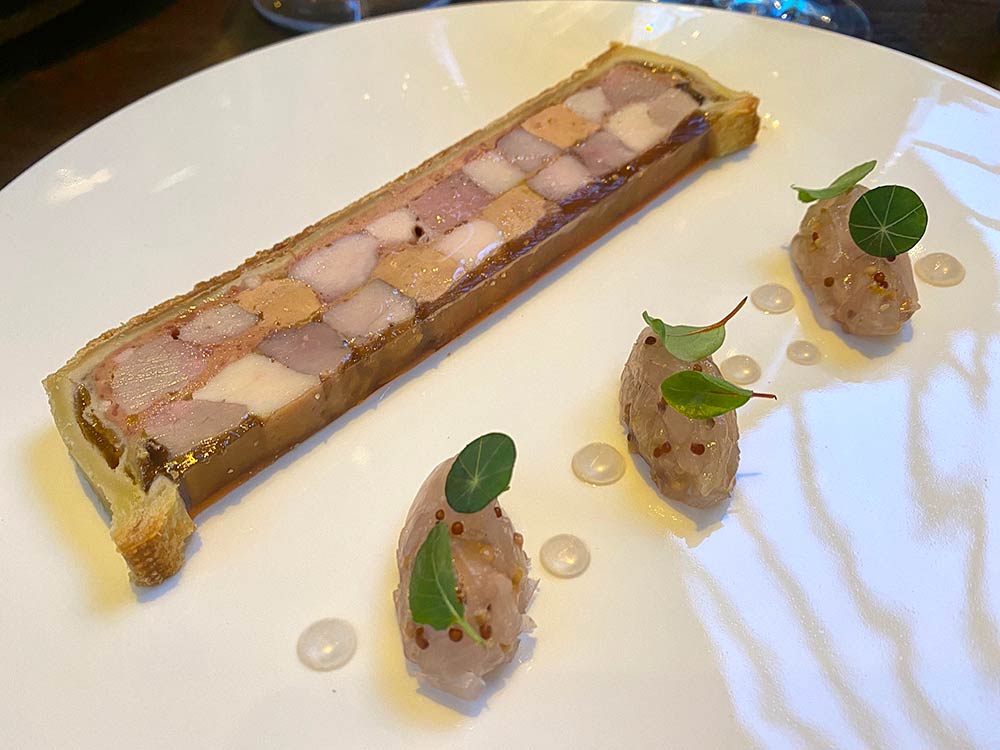 Berkshire spring pie, pickled onion relish and nasturtium (£15) - with a mix of rabbit, Berkshire pork, quail, and chicken, it's essentially a rather fancy pate-en-croute, in a very good way. 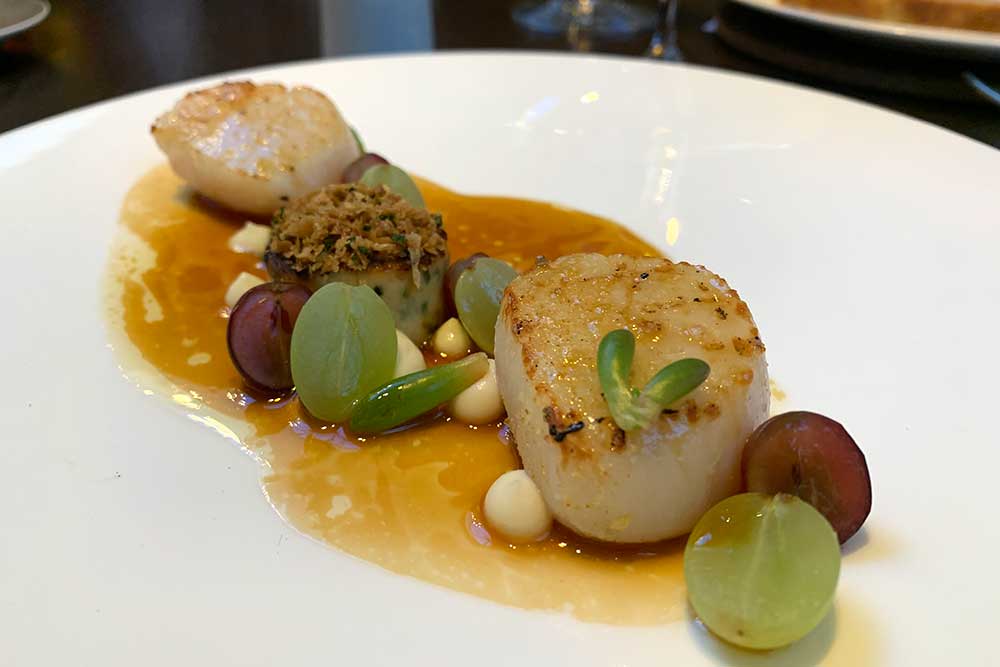 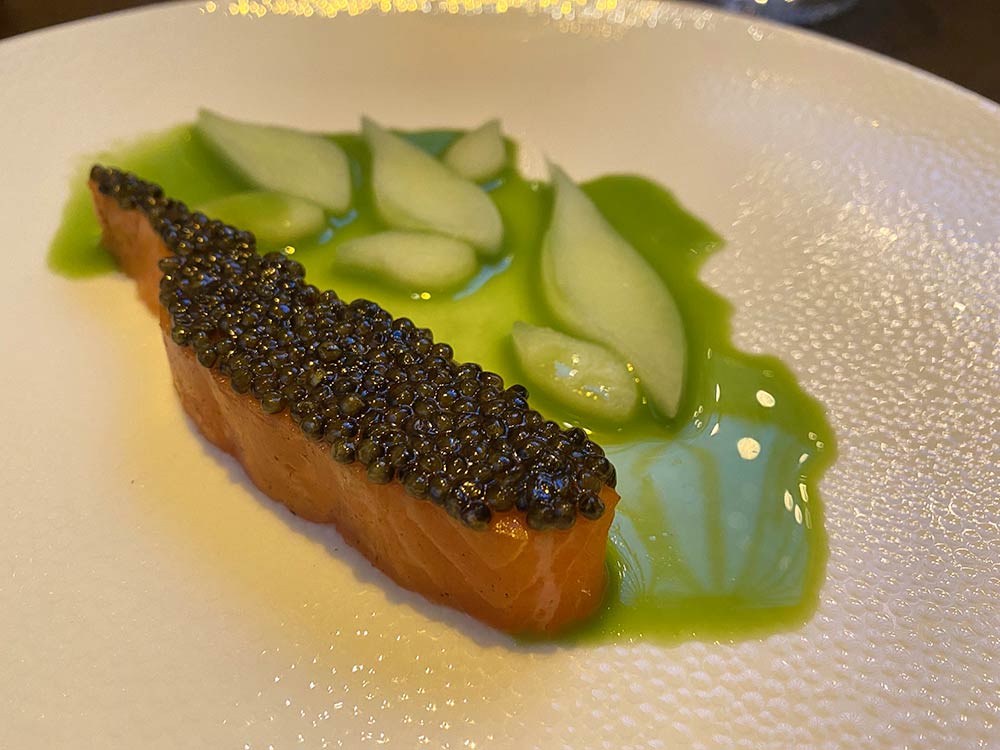 Berkshire trout, Oscietra caviar, cucumber and horseradish (£16) - one of their signature dishes 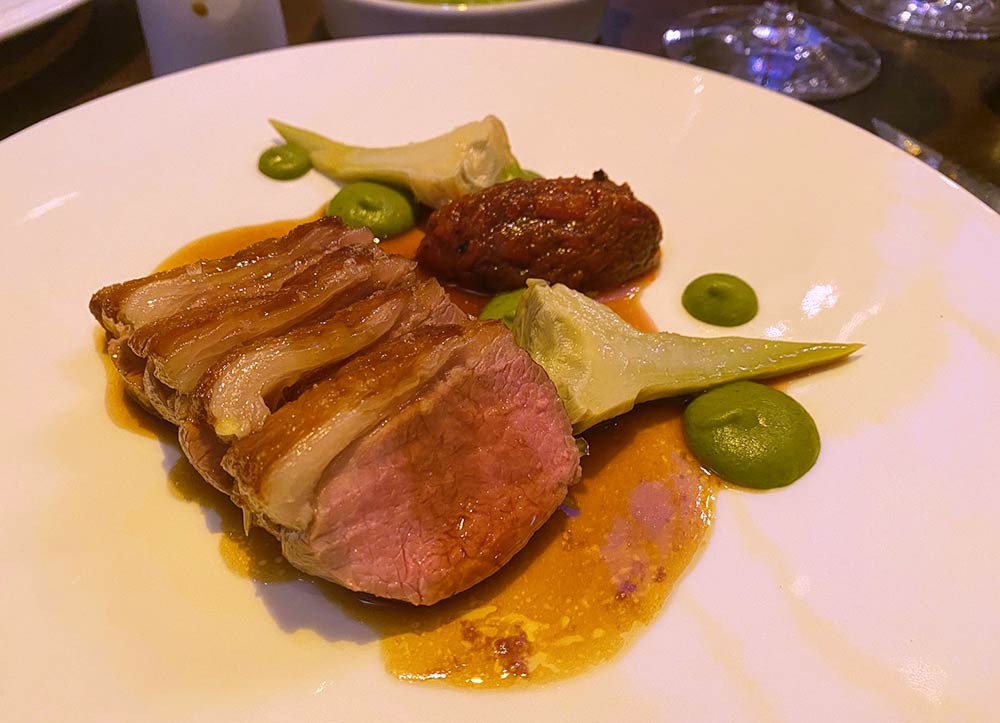 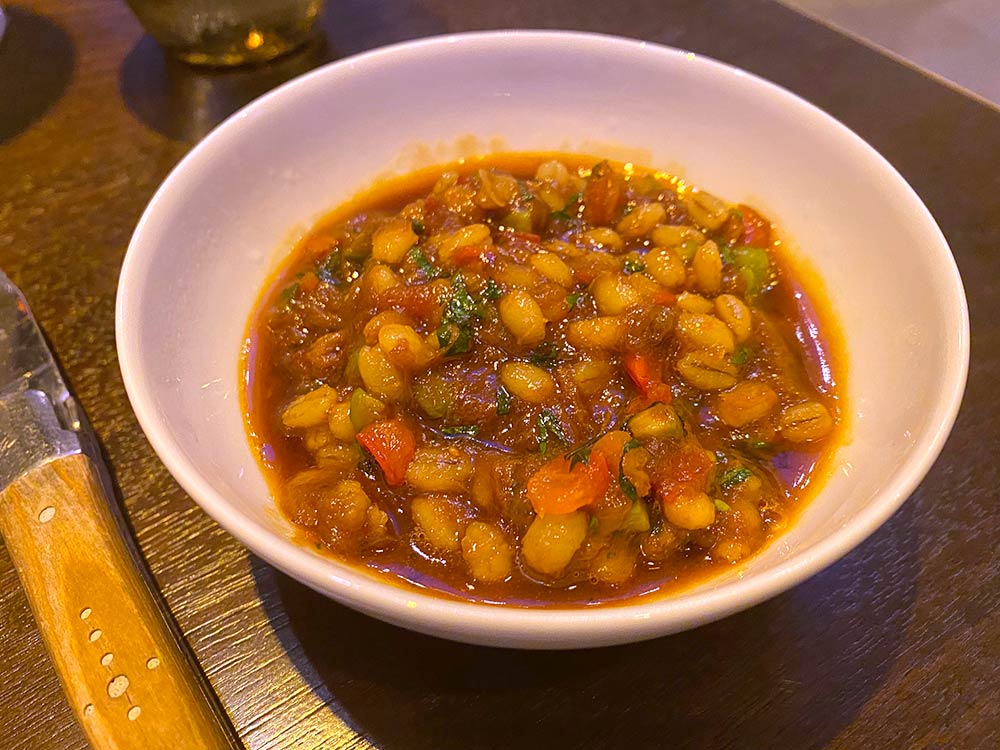 ...this side dish of extra braised lamb, a Provençal mix of olives, tomatoes, basil, shoulder of lamb and pearl barley, which is superb. 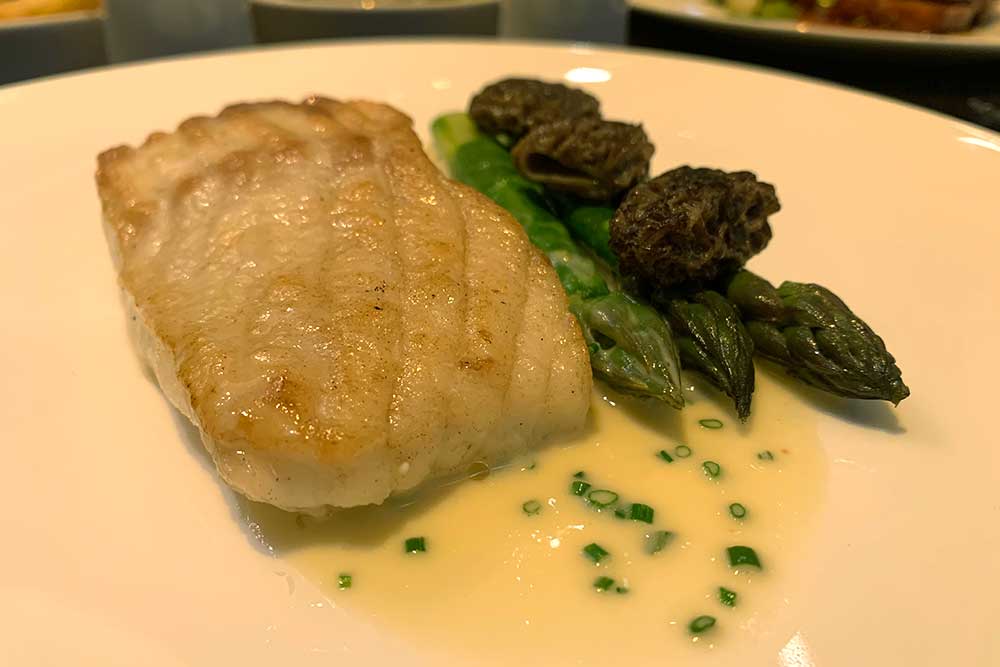 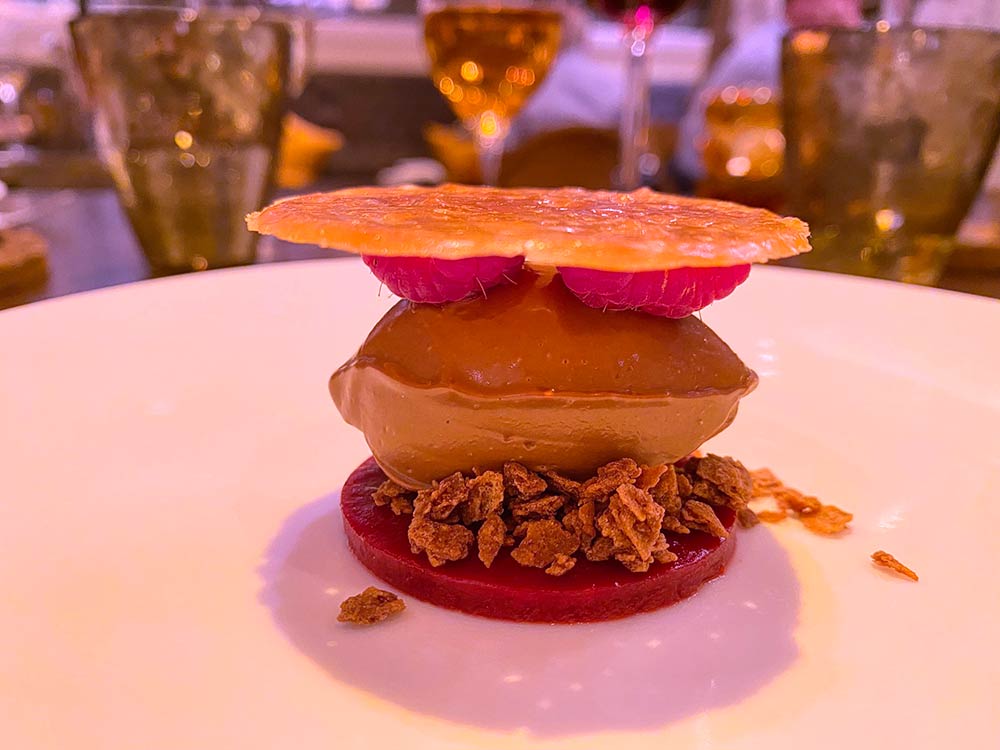 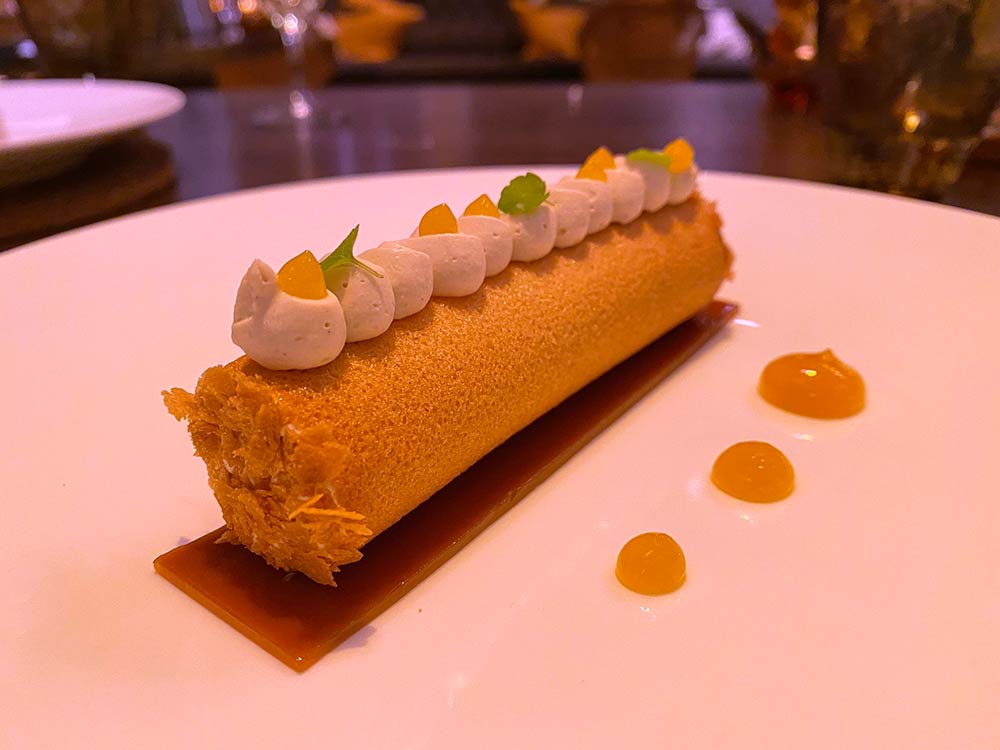 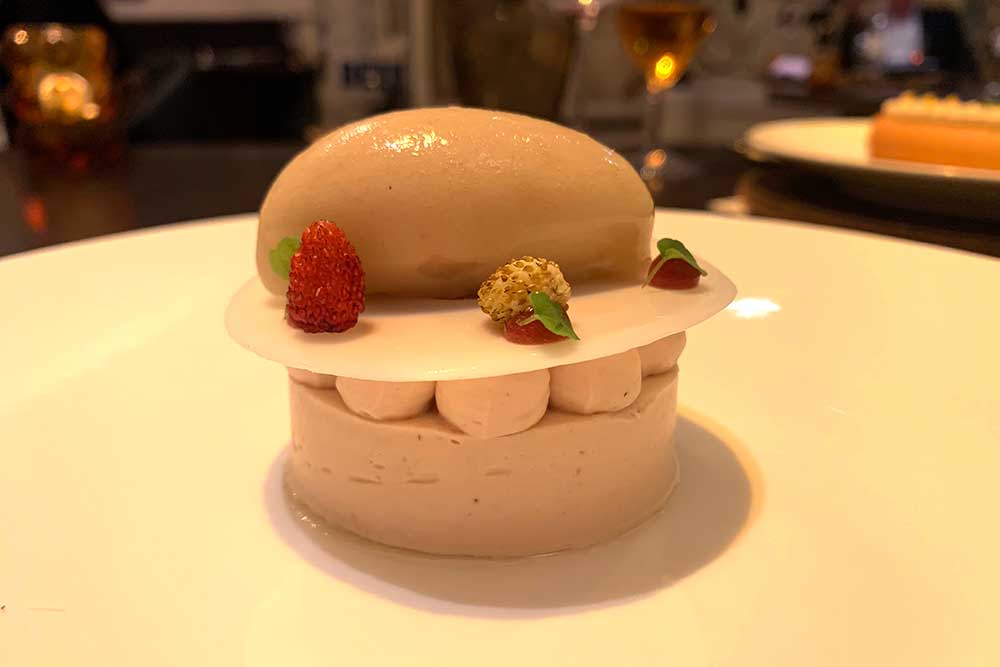 And what about outside?

The huge marquee is a very different affair to the main restaurant - and dominated by a wood-burning fire at the centre. There's a lot of fire and smoking in the cooking here, with a menu that's a collection of small plates and a few bigger sharing mains. It's pretty good value, with three plates plus a drink (which does include Tattinger Champagne) coming in at £30. That would be a steal right in the heart of town, let alone near Newbury.

It's also a strong menu for vegetarians, with around 10 dishes to choose from, with a falafel and spiced pea taco definitely worth ordering.

Here's a look at what's on offer: 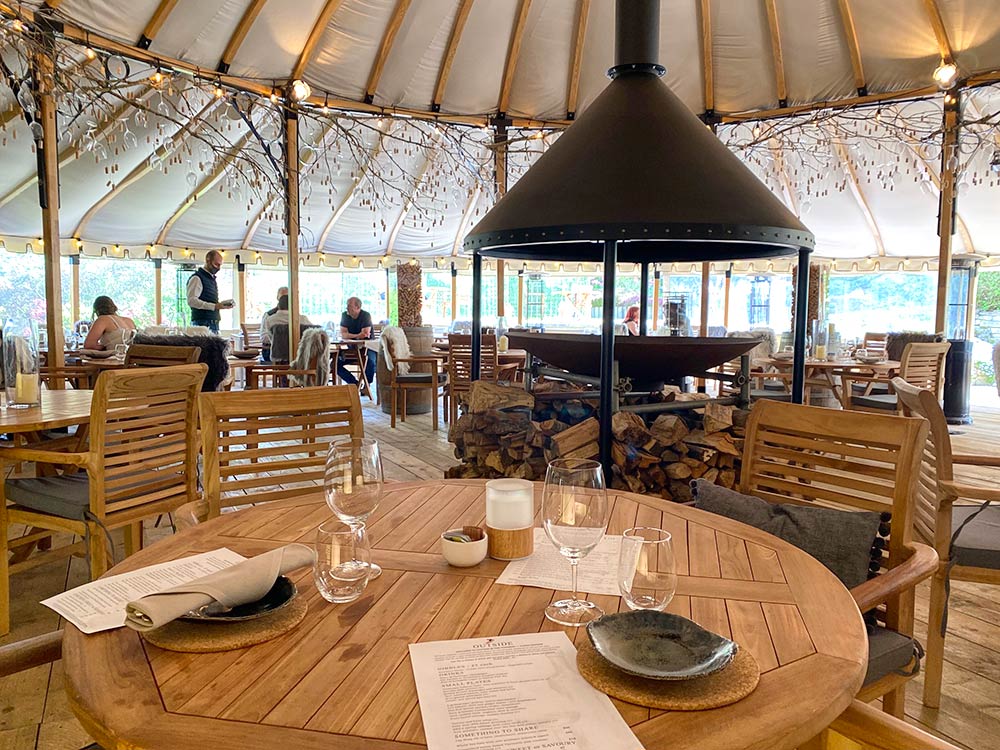 A look at Outside - all centred around the fire at the centre. 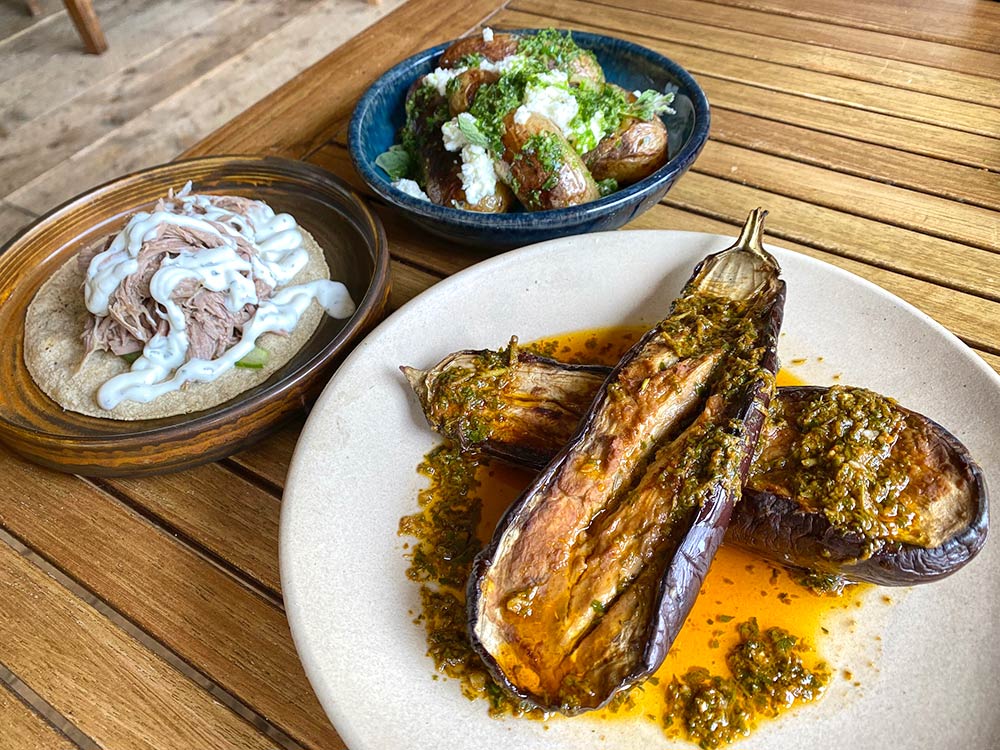 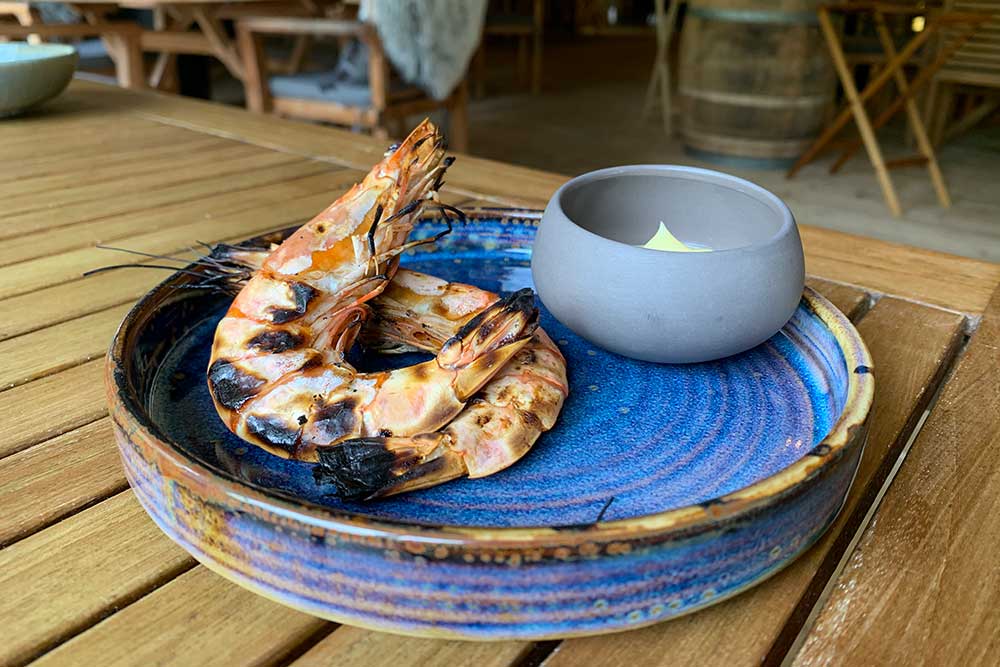 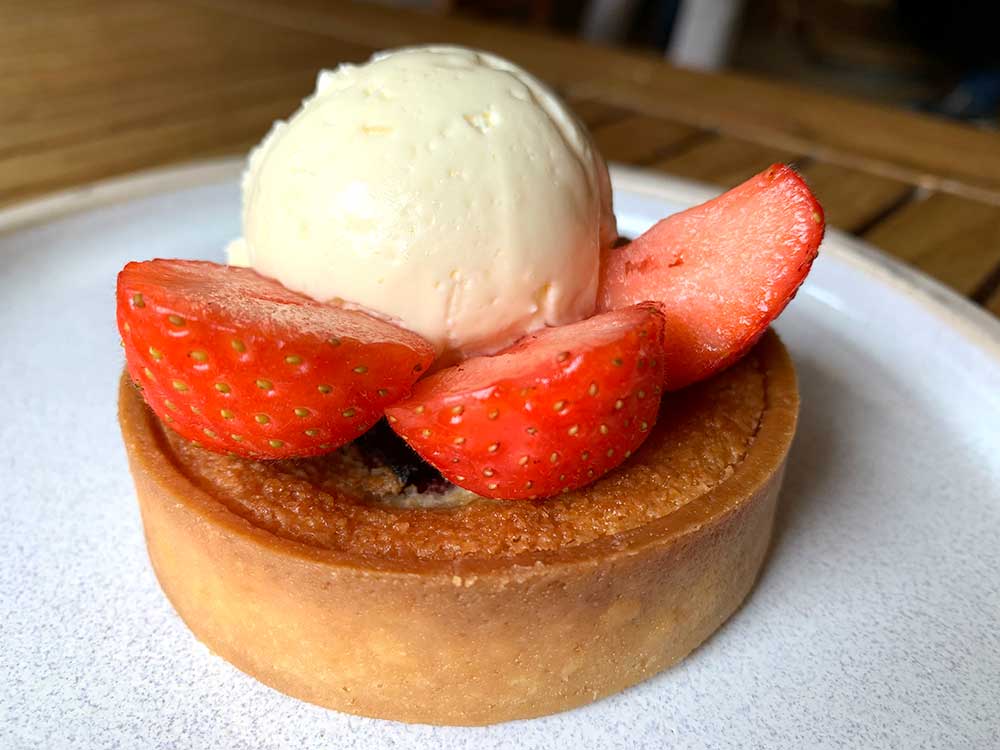 What about those sharing plates?

If you're after something a little bigger - then there are a few big options. At the time of our visit, those were a 1kg wing of beef with chimichurri and watercress (£60), whole seabass with new potatoes (£45) and  Hungerford honey-baked Tunworth with crudites, crackers and bread (£18). More than enough if you're fancying something larger.

With a name like The Vineyard, wine is clearly a very big focus here, and particularly so when it comes to Californian wines. In the bar, you'll see a mural dedicated to "The Judgement of Paris" a famed blind testing in 1976 when Californian wines trumped their French cousins leading to quite the fallout. So the lists feature wines from Europe, but a much larger range of Californian wines than you might see elsewhere. These include the wines by the hotel's owner, Sir Peter Michael, who happens to have a winery in Sonoma.

With that in mind, you're probably better served keeping more of an eye on the US wines so you really get a chance to try something relatively new. It's also strongly recommended to take the guidance of their sommelier, who balances fun and a little bit of wine-learning very well.

There are two wine lists - the standard dinner list or a much more comprehensive long list that takes in all the 30,000 bottles in the cellar. So you can go wild with wine here - but if you're budgeting more, there are some keenly priced offerings here, with the house starting at £24 a bottle and a fair few in the £30s.

What else can you tell us about the hotel?

As it's a spa, there's an indoor pool - something that seems better than ever after months of lockdown over the past year or so. Note that you do have to book a two-hour slot in the pool area - but it is absolutely worth it. There are 49 rooms in the hotel. from doubles to suites of increasing levels of luxury.

There's also a lot of green space around and they've plotted out a handy 20-30 minute walk that can take you from the hotel to The Woodspeen, a nearby Michelin-starred restaurant and cookery school, via a bluebell-filled wood. So if you're there for the weekend - that should be well worth a look.

If you're looking for an escape from London to somewhere with a great wine list - The Vineyard at Stockcross should definitely be on your radar, whether you're only making a day trip or staying overnight. To really get the most of a stay here though, try booking dinner in the main restaurant and a convivial lunch in their alfresco haven Outside.

More about The Vineyard at Stockcross

Where is it? Stockcross, Newbury RG20 8JU

Hot Dinners ate and stayed as guests of The Vineyard. Prices are correct at the time of writing.