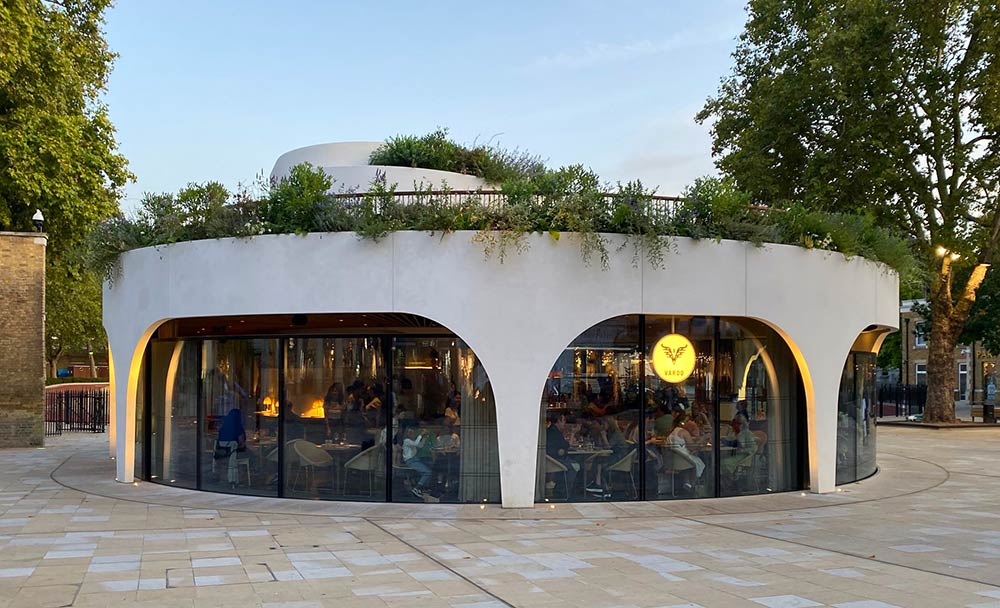 Yes, that entire window sinks into the ground.

What can you tell us about Vardo?

It's a brand new restaurant from the people behind Caravan, who are going far west for the first time, opening in Chelsea. There are definite similarities to some of the food that's served in their other restaurants - pizza and that amazing cornbread is still on the menu for instance - but this is more of a globetrotting menu aimed at the Chelsea crowd. It's also in an amazing building.

Literally just off the King's Road on Duke of York Square, about a five-minute stroll from Sloane Square tube. Look for the round building - you can't miss it.

And what's so special about the building?

It's a purpose-built structure in the middle of the square and while the building itself looks rather impressive, the windows are the real draw. Circling the entire building, they're floor to ceiling - until they retract. All the windows can sink completely into the floor, opening up an alfresco building. It's hugely impressive, and we have to admit we'd be playing with the switch all day long if we were left near it. On a balmy early autumn evening, the windows were two thirds up when we visited. 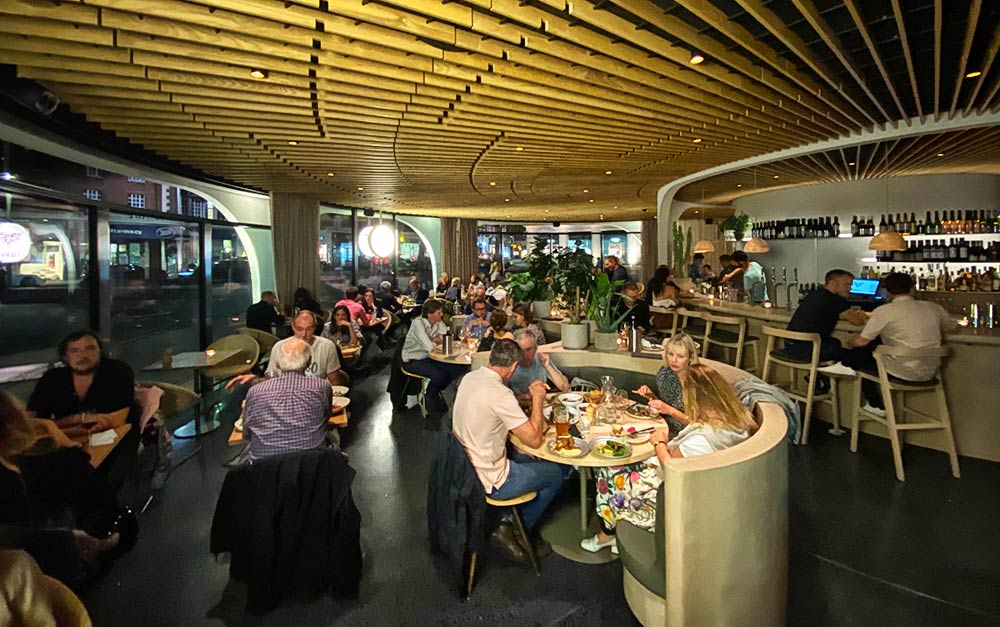 A look inside Vardo

The round building means that there are a lot of seats by the window - so if there are two of you, grab one of these if you can. Alternatively, there are also booths for larger groups, all facing out at the windows too, so they're making the best use of the space.

And what can we expect from the menu?

It's a globetrotting affair, made with primarily British ingredients. As mentioned, you'll sense some familiarity with the menu if you've been to Caravan - no bad thing - but there are a lot of new dishes on this menu too. It's split into snacks, vegetables, fish and meat, bowl food and pizzas. You probably won't go through all that on one visit (we didn't make it to the bowl section ourselves) but it's a menu that rewards repeat visits. 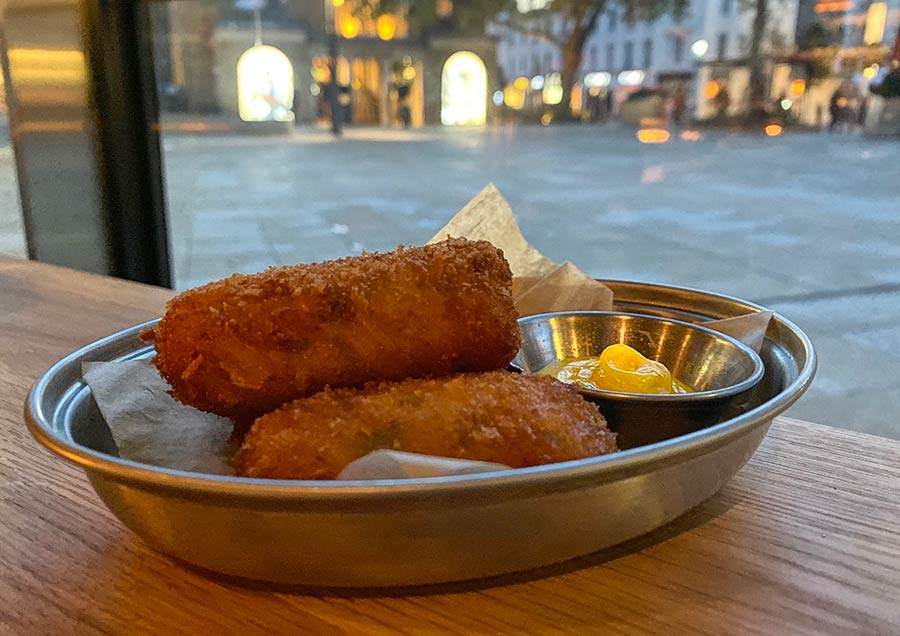 Kicking off with croquettes - Jamon and San Simon - from the snacks section (£7.50) 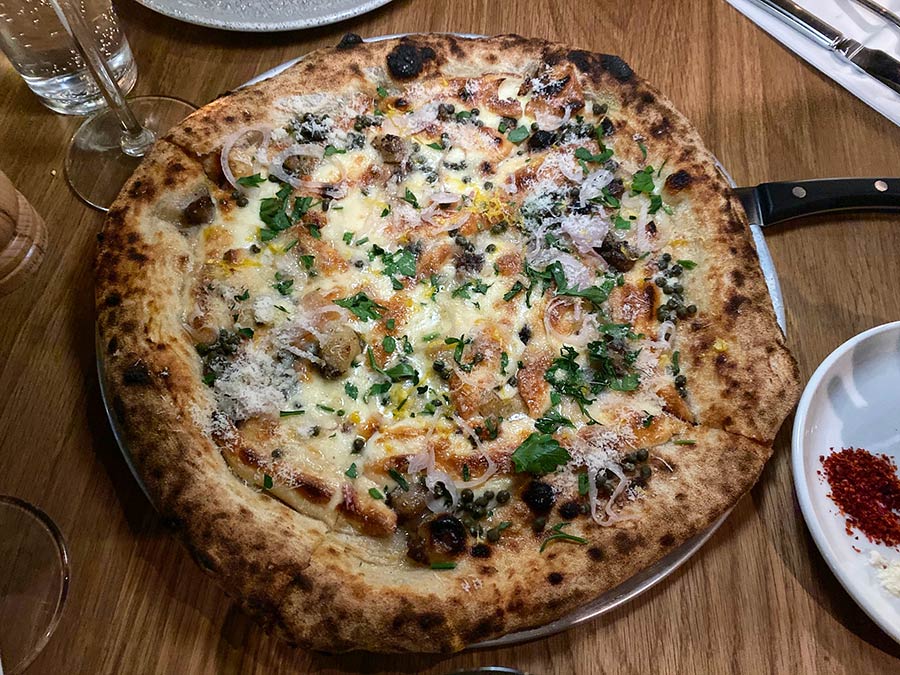 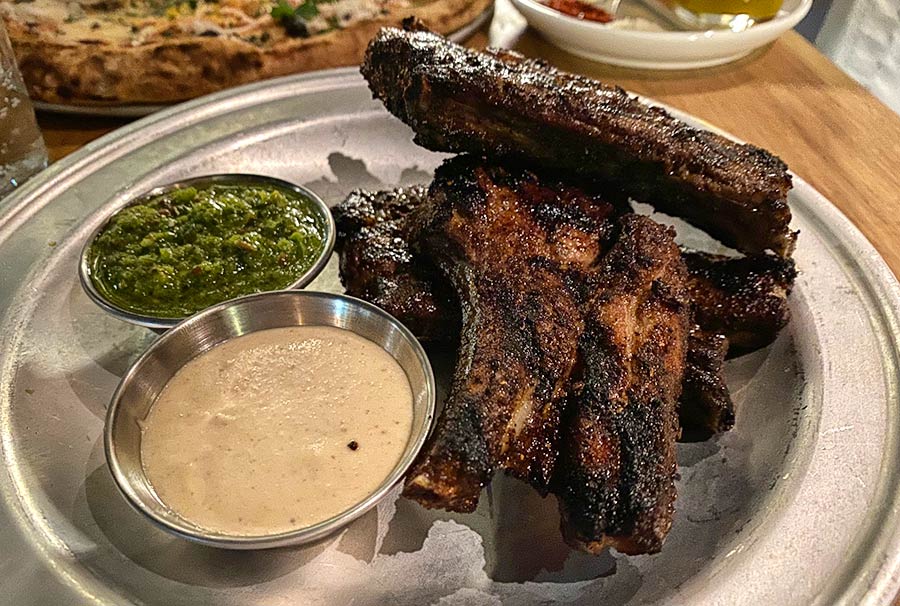 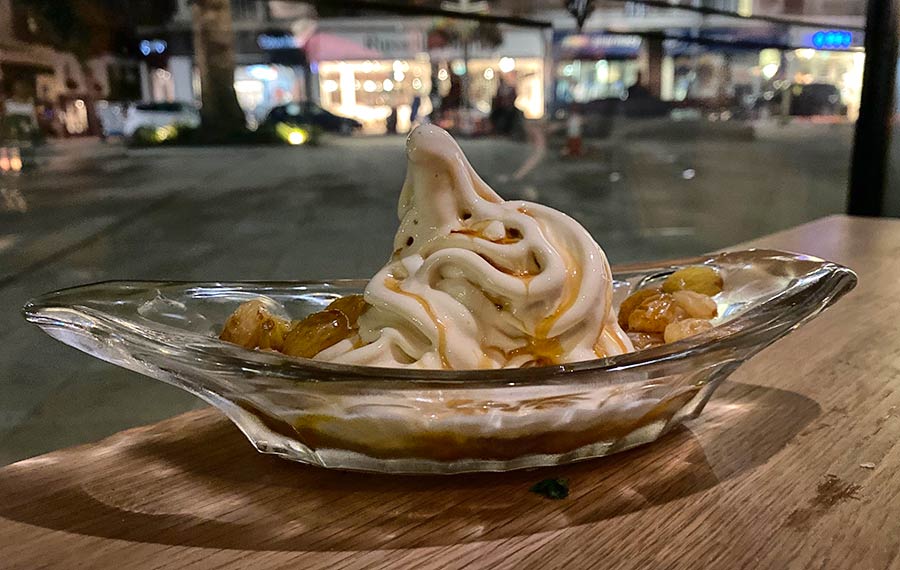 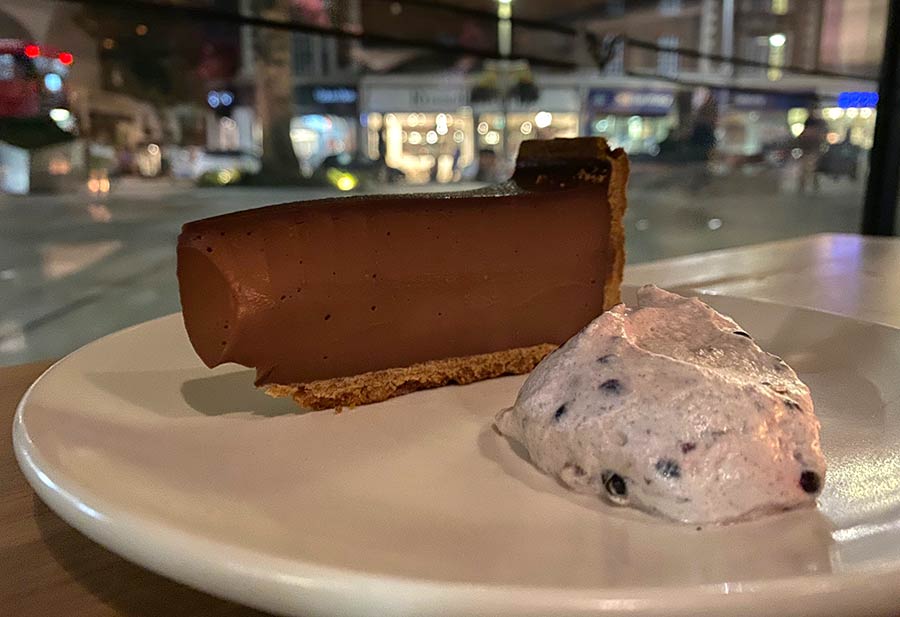 What about vegetarian options

The menu here is particularly strong, we thought, on vegetarian dishes. Here's what we enjoyed on the night. 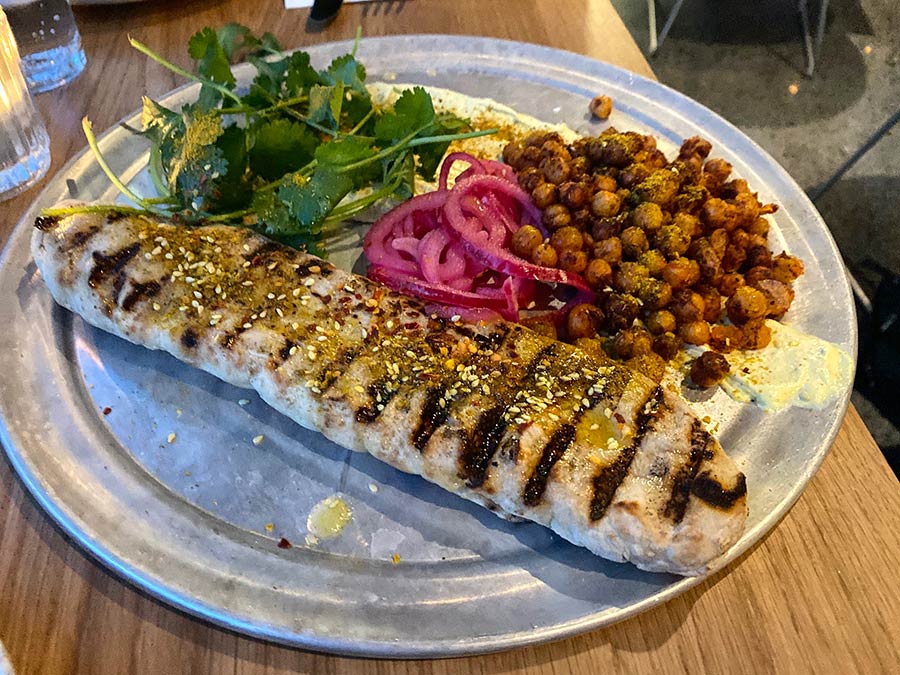 A must-have, we think - this is garam masala labneh, fenugreek chilli butter and spiced chickpeas served with their house flatbread (£7.50) - it's truly excellent. 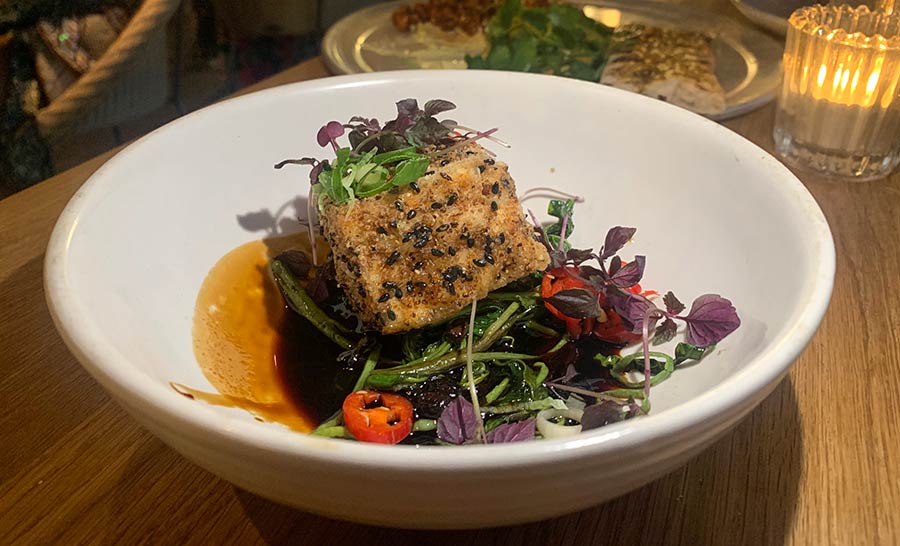 Crispy chilli-salt tofu, ong choi, salted black beans and sesame (£9) - one of the best tofu dishes we've had in an age. 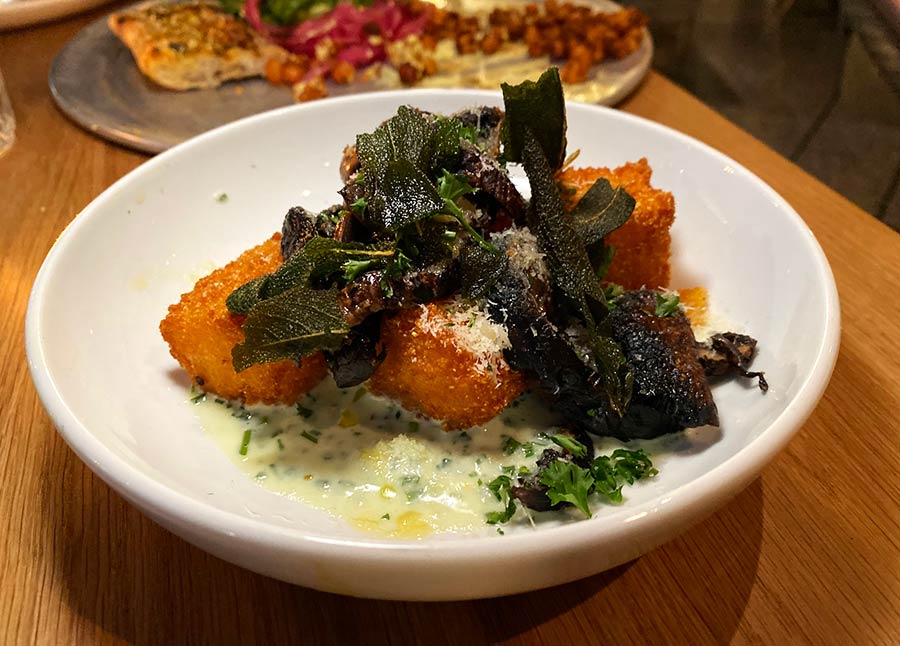 We'd been recommended the whole crispy fried sea bass (£29) but just couldn't manage it on the night, and the spiced pulled lamb shoulder, pinenuts, pomegranate mint pesto, tahini (£22) we spotted on a neighbouring table also seems worth a look.

Caravan are known for breakfast and brunch, and you can expect a strong showing here too. There's the "full Vardo" which is also available in vegetarian form, and some notable dishes include "Seasoned brown rice, hot-smoked salmon, avocado, pickled ginger, miso mayonnaise, furikake (£15) and Tamarind and coconut lamb mince on toasted sourdough, poached eggs, coriander and chilli (£12).

Caravan have always served good cocktails, so it's worth starting your night in that section. The cocktails also have a globetrotting feel, divided into the areas of the world that they're influenced by. We opted for a "Land of Kings" (from the Rajasthan & Northern India section) which was whisky, blended rum, Vardo 5 spice blend, clarified milk (£12) and (from the Russia and the Great Plans section) the "Great Plains" which was Beluga vodka, olive oil, brine, peppercorn (£12).

As for the wines, prices start at £24 a bottle and there's a large amount available by the carafe. There's also a strong line in non-alcoholic options, from cocktails through to ferments and sodas and pressed juices. Of course, they also do a strong coffee, all roasted by Caravan.

Vardo shows some clear influence from Caravan in its menu while also wandering further afield for its influences. It's a mix of dishes that we think will prove to be extremely popular with the Chelsea crowd and is varied enough to reward repeat visits. It all adds up to another winner from the Caravan team.

Hot Dinners ate as guests of Vardo during the soft launch period. Prices are correct at the time of writing.

Where is it? 9 Duke of York Square, London SW3 4LY