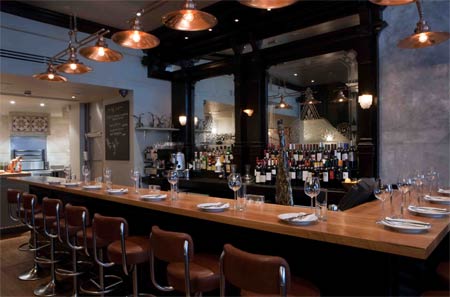 The past year or so has been something of a magic makeover for Covent Garden as it gradually transformed from being a culinary wasteland where only those who thought a tofu burger or Cornish pasty were the giddy heights of what the food world could offer would enjoy eating there, to something of a dining destination in its own right.

Recently we've witnessed the opening of some serious restaurants in the area, including Les Deux Salons, Kopapa, the revamped Savoy Grill and Hawskmoor Seven Dials and the area will soon enjoy the highly anticipated opening of London's first Balthazar. The latest addition to this scene is the revamped Opera Tavern.  However, this is far beyond a mere sprucing up of an old pub, as the folks behind the hugely popular Salt Yard and Dehesa have brought their own style of European tapas to Covent Garden. They invited us along during their soft-opening to put their kitchen to the test.

The very nature and popularity of tapas and smaller sharing dishes has been well exploited by others - notably the nearby duo of Polpo and Polpetto - so we did wonder what new joys The Opera Tavern would bring to the party. But this place immediately passed the first test - delivering a menu so full of delicious-sounding dishes, so we took an age to pick what to have. Happily the menu anticipates this, so we ordered a bunch of bar snacks so we could happily take our time over what to order next.

We took the advice of our waiter - who had only started the day before and already seemed like an old hand - and headed straight for the crispy pig ears. These might not be the first choice for the more squeamish of Hot Dinners readers, but they're essentially posh pork scratchings in thin curly strips.  We accompanied this with the Iberico Scotch Eggs - a distinctly European version of the old familiar, with a strong taste of Spanish pork. 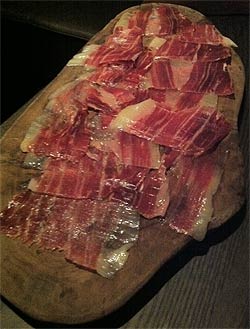 Slightly sated, we started ordering for Britain - picking as much as we thought we could handle whilst tweeting our followers for their recommendations (and thanks to those who replied). The first highlight was the Mini Iberico Pork and Foie Gras Burger - as delicious as it sounds and the one thing we would recommend that you don't share with your dining companions. We ordered two to avoid bloodshed. From the grill we tried one of the Pinchos Morunos, the Onglet with Porcini and Winter Truffles.  These skewers are pretty teeny, but a near- perfect combination of flavour and when we go back we'll definitely sample more from the grill. Next up was possibly the highlight of the meal - a platter of Jamon Iberico de Bellota, aged 5 years. This was amongst the best ham we have ever eaten, the fatty strips practically melting into the board before we could get our hands on them.

And we kept going...lovely crispy (and unchewy) squid was followed by Salt Marsh Lamb Leg with Pumpkin Gnocchi, Salted Anchovies, Brown Butter and Mint. We were originally wary of this dish - we’re not big mint fans - but spurred on to order by the twitter massive, it proved to be the most interesting of the night with the anchovies and mint delivered in subtle style - a perfect combination to the tender lamb. Next up was the unavoidable pork belly - the only dish which failed to completely impress, as the accompanying rosemary-scented cannellini beans seemed an unnecessary extra. Finally we rounded everything off with some lovely gorgonzola and date croquettes and washed the whole lot down with a Cantina Terlano Pinot Noir as recommended by our waiter.

Not completely done, we soldiered on after a short breather with a panna cotta (one of our standard tests of a kitchen's dessert menu - and one it passed admirably) and a selection of cheeses.

As we finally waddled out the door, we both agreed that this had been a tremendously enjoyable meal.  Not one dish had disappointed, while some - the ham and the mini burgers, particularly - were easily worth crossing town for.

It's another great addition to Covent Garden and as the buzzing downstairs section is kept for walk-ins only, it's well worth popping in for a good few cheeky tapas if you're in the area.

See what other critics had to say about The Opera Tavern.