Trying out the new menu at Grain Store Gatwick 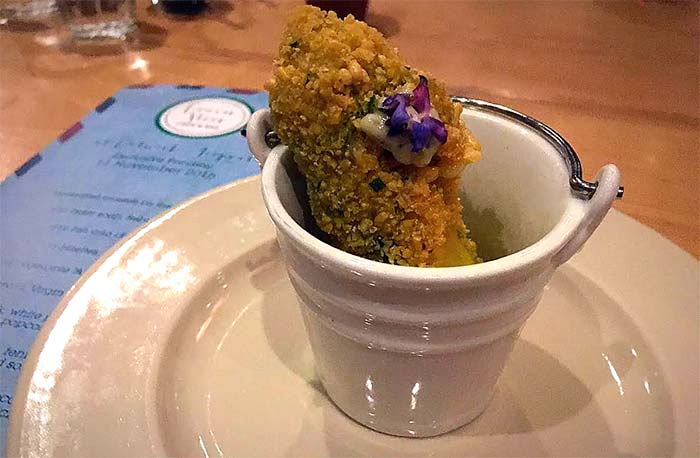 Airport food is certainly getting more sophisticated - it's come a long way from the days when a soggy panini and a flabby croissant were the best you could expect. Now - after Gordon Ramsey's Plane Food and Heston's The Perfectionist's Café at Heathrow - Bruno Loubet is bringing his Grain Store concept to Gatwick's South Terminal, with a dramatic open kitchen behind a 5 meter long glass wall.

We were invited along to preview the menu (at the original Grain Store) which aims to showcase Loubet's commitment to seasonal, vegetable focused dishes, using the best ingredients he can find.

A mix - say the Grain Store team - of special recipes and 'classics' with their own twist. In reality this means some pretty innovative dishes - we tried a 'burrata and Virgin Mary', which involved waiters pouring a clear tomato broth onto a little cheese sphere, creating a sudden burst of flavour as you drink it. A take on 'fish and chips' was a single goujon, with potato in the crispy coating and a layer of seaweed salt to dip it into. A dessert of beetroot cake, chocolate sorbet and goats cheese mousse was a picture on the plate.

There are plenty more traditional plates for less adventurous travellers: Dingley Dell pork comes three ways: medal, white pudding hash and a piece of crisp bacon, with a breadcrumbed sphere of 'apple popcorn' on the side. There'll also be a wild mushroom risotto and a shepherd's pie on the Gatwick menu, with "lots of root vegetables".

We loved the sound of the early morning offering, which includes the heroic sounding Bruno's Power Breakfast - eggs benedict, truffles, broccolini, grilled vegetable ratatouille with dukkah and avocado on toast. Try fitting all that in a single Instagram shot.

We're on holiday. What about drinks?

There'll be a range of innovative cocktails, something Grain Store has already become well known for. Try a quince Bellini or a lemon sherbet Margarita to get your holiday off to a flying start. If you're booze-free - there'll be juices and smoothies: the 'Roman Redhead' which we tried, a mix of red grape juice, beetroot and Verjus was a very decent alternative to red wine.

My gate's about to close...

The cafe and bar says customers will be served "within 15 minutes" - and they'll be offering sandwiches and burgers if you've got to eat in a hurry. And in the new year, there will be bento boxes so you can take away food for your flight. And that's got to be better than the onboard offerings in Economy class - even worth getting to the airport early.

Grain Store Cafe & Bar at Gatwick South Terminal, opens in December 2015. Find out more from them on Twitter @GrainStoreKX