Trying out the new QV Bar at Soho's Quo Vadis 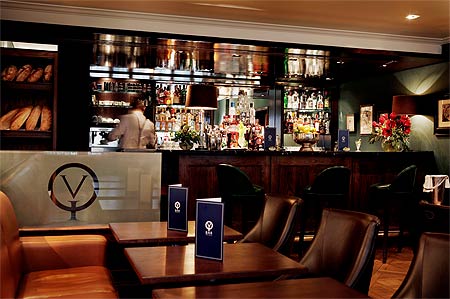 Quo Vadis has always been a favourite Hot Dinners haunt (particularly whenever we manage to gain access to the members' club upstairs) so when we were invited to try out the new QV Bar, we may have reacted with rather unseemly haste.

The QV Bar launched in January and occupies a space previously taken by part of the main restaurant. As owner Sam Hart explained, it had been one of those neither fish nor fowl places which wasn't a particularly popular part of the dining room. However, reinvented as a standalone bar space it makes perfect sense.

The small room seats about 20 people and is decked out in the same opulent style as the main restaurant.

The bar menu is divided into bar snacks, a selection of oysters/shellfish and main dishes. We wanted to test the full experience so we started off with a selection of bar snacks. The selection here is full of temptations - given the Hart brothers' experience with tapas in Fino and Barrafina, that's not surprising.

The salt cod fritters with their fabulously light batter and massive flakes of fish were far and away the winning way to soak up a drink or two and are worth returning for alone. We followed that up with a pretty good Scotch egg (lovely runny yolk, but a bit mean on the sausage meat) and pork scratchings with apple sauce.  The latter - though looking (and ultimately tasting) fantastic required teeth of steel and did have the somewhat unfortunate tendency to drown out the conversation of your companions while you were crunching away. 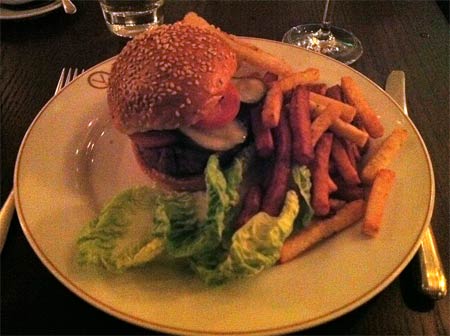 Moving onto mains it was clear one of us would have to try the QV burger. London restaurants have only recently discovered how to serve a burger properly -  Bar Boulud, Goodman and Hawksmoor being good examples - and we wanted to see how QV Bar stacked up against them. We weren't disappointed - the burger was excellent; well seasoned, served on a bun which soaked up all the juices just like it should. It also came with some of the lightest onion rings we've had the pleasure of eating and some frankly amazing chips. It was a triumph, up there with the best we've had and a very easy recommendation. We also tried the crab linguine which was great - plenty of lovely crab meat and just enough chilli to keep this rich dish from being too cloying.

We should have been full by now, but pigs that we are, were unable to resist the dessert menu. An apple trifle, covered in crushed apple-flavoured ice was a wonderfully light way to end the meal - and this was paired with a deceptively enticing mini toffee apple.  Alas, the sticky apple had been placed on the paper doily and didn't come away unblemished. It then proceeded to weld Hot Dinners' teeth together - so we'd recommend you approach that part of the dessert with care...

No such problems for the other dessert - a fantastic basket of warm madeleines - fresh out of the oven.  These were easily enough for two; we got the rest wrapped up in a doggy bag to devour later.

In all, we have no hesitation in recommending the QV bar - the food is good value, there's a large selection of bar snacks to work your way through and the wine was well priced, with no bottle priced over £25 and some as little as £12.  It's handy for any Soho meet-ups and although it was packed when we turned up at 7pm - we think you might be able to grab a table if you were passing the place after 8.30.

A great little addition to Soho.

Find out more about Quo Vadis