Trying out Marcus Wareing's The Gilbert Scott at St Pancras 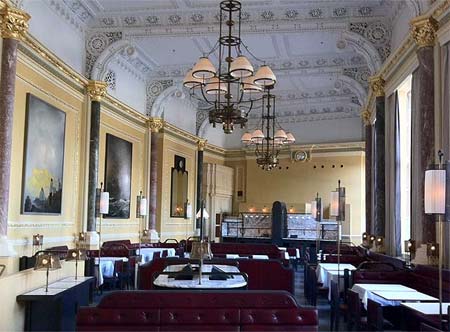 What is The Gilbert Scott?
The Gilbert Scott is a new venture from Michelin-starred chef Marcus Wareing. But there’s a reason his name isn’t over the door - he’s staying at the Berkeley, while The Gilbert Scott is presided over by Wareing’s protege Chantelle Nicholson who, together with head chef Oliver Wilson, has created a menu which draws on all kinds of historical British dishes from yesteryear.

Where is it?
It's situated inside one of the best looking buildings in London, the recently-refurbished St Pancras hotel, right next to the Eurostar Terminus. Approaching the entrance to either the hotel or The Gilbert Scott gives you one of the most stunning views in London, and that's even before you step inside.

Who's the restaurant suitable for?
A very mixed crowd indeed.  It's perfect for commuters looking for a classy meal before he heading home - the fixed-price, two-course supper menu between 5.30 to 6.30 is aimed at them (and bargain hunters). But we reckon the restaurant will be ideal for everything from those wanting to impress a date, business clients or take their parents to. Best of all it’s a godsend to North Londoners who had loads of gastropubs and neighbour spots, but no fine dining establishment to speak of, before this opened.

Where should I meet my fellow diners for a pre dinner drink?
The best bet is the jaw-dropping David Collins-designed bar, the entrance to which is either through the hotel or by the main restaurant entrance on the Euston Road.  A selection of inspired cocktails are an ideal way to start the meal.  We tried both the Pot Poire and the Good for the Goose, but were particularly impressed by the 1873 - a mixture of Bombay sapphire, apple, cranberry and rhubarb bitters, charged with CO2 and served via a siphon. It's like alcoholic sherbet and dangerously moreish.

If you want to meet up elsewhere, the booking hall restaurant, the St Pancras Grand champagne bar and gastropub The Betjeman Arms are all on the first floor of St Pancras and ideal meeting places.

What should I expect when I walk in the door?
As mentioned above, the restaurant and bar has been designed by David Collins to perfectly match the restored St Pancras building.  So expect some great architecture with very, very tall rooms which match well with Collins's modern touch.  Both the bar and the restaurant are easily contenders for the most beautiful rooms Hot Dinners has eaten in.

When full, there’s a great buzz in the room but, due to the high ceilings, the noise is dissipated creating

And where should we sit?
The seat directly inside the restaurant entrance will give a full view of the room, and also of the hotel facade through the huge windows.  However, we'd really suggest sitting slap bang in the middle of the restaurant to get the greatest buzz.  When Hot Dinners were there, Ricky Gervais and Stephen Fry were both holding court, so we'll assume it's the prime space.

What would you recommend ordering?
The menu is chock full of things we’d return for – but from our visit this time around we’d highly recommend the bacon olives to start. These were slices of minced pork and herbs wrapped with bacon – with an accompaniment of an endive and shallot salad that perfectly cut through the richness of the “olive”.  We also loved the mushrooms on sippets (sippets=toast) with a liberal spreading of marrow nuggets.

For mains, the Dorset Jugged Steak – a braised featherblade served with pork dumplings, port and redcurrant jelly was a definite winner. The steak was braised so that it fell away at the touch of the fork and served with a deep rich sauce. Warning - this could be a bit too heavy as the days get warmer. We also tried (and would heartily recommend) the Soles in Coffins – lemon sole, vermouth cream, shrimps, mace and a crispy potato ‘coffin’.

Of the accompaniments, we’d urge you to order the colcannon – although be forewarned that it’s made with a particularly artery-clogging level of butter. We also tried the mini Yorkshire puddings with gravy.  Alas – we weren’t as taken by the Yorkshires as we’d have hoped, as we’d have preferred the gravy to have been a bit richer.

For dessert, as Mr Wareing was in the house we had the opportunity to try, as a special, his signature custard tart, served with rhubarb sorbet. It was every bit as good as its Great British Menu reputation, melting in the mouth with every bite. We’d recommend the Bakewell Tart too – a faithful interpretation of the classic dish. We also enjoyed the Jaffa Cake sponge wrapped in candied orange, but were mostly taken by the Earl Grey ice cream it was served with.

Is bread included?
It is indeed, very good and served with lightly salted butter.

What's the cheapest wine I could get away with ordering?
The cheapest glass is £4.50 and cheapest bottle £25 (for a “Le Grand Noir” Viognier or GSM).

And the cheapest main?
Well, the best deal is the supper mentioned above at £19 for two courses and £24 for three - served to commuters between 5.30 and 6.30.  There are a few mains priced around the £16 to £16.50 price point, including the jugged steak above.

Are there vegetarian options available?
Four starters and one main (The Glamorgan sausage - Leeks, Caerphilly cheese and a herb salad) on our visit with a large amount of accompaniments and sides on offer.  There are a large amount of fish dishes on the menu if you're just avoiding meat.

Any freebies on offer?
The savoury popcorn with salt and black pepper served in the bar is well worth trying -  Hot Dinners devoured two portions before we even got to the restaurant.

Overall thoughts?
We unreservedly loved The Gilbert Scott and will definitely be going again. @hotdinners2 often meets with friends in King’s Cross – no, that’s not a euphemism – and feels that this is easily the best restaurant in the area. As far as fine dining is concerned this really is North London’s new best bet, but it’s worth highlighting The Gilbert Scott has a more laid-back vibe than Wareing’s Mayfair restaurant, where he stresses that he’ll be spending most of his time. He told us that this restaurant is definitely Chantelle Nicholson’s vision (she apparently has an unseemly number of old British cookery books in her library), and we think that the both of them come in trumps with another winner that celebrates British cooking in a stunning environment.

Find out more about The Gilbert Scott

Prices are correct at time of writing. Hot Dinners was invited to eat at The Gilbert Scott.