[SIGPLUS_EXCEPTION_SOURCE] Image source is expected to be a full URL or a path relative to the image base folder specified in the back-end but /blog/2013/fifteen/gallery is neither a URL nor a relative path to an existing file or folder.
0
Shares 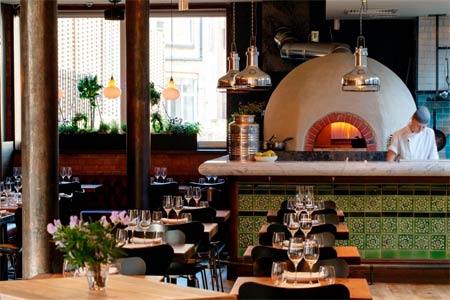 What can you tell us about Fifteen?

Fifteen is Jamie Oliver's flagship restaurant, nestled away on a quiet area near Old Street. It's best known for being a restaurant where Jamie takes on young students with difficult backgrounds with a view to training them up for jobs in the industry.

All the profits from the restaurant go to his charity, the Better Food Foundation, as do those of the sister restaurants in Cornwall and Amsterdam.

Why are you visiting now?

It's all change at Fifteen. In the past, it was an Italian restaurant - the cuisine that Jamie was initially best known for. However, the restaurant had come under criticism of late and was really in need of a revamp. It's certainly a major one - the upstairs restaurant has been completely refitted to add a large bar area, and there are design changes throughout. In addition, the cuisine has completely changed, as Fifteen now offers a very British menu, led by head chef Jon Rotherham who was previously at British food institution St John.

It's in a relatively underdeveloped and quiet area north of Old Street (for the moment anyway, big developments are happening all around), in a side street called Westland Place, just off the City Road.

Who is it best for?

It’s certainly ideal for Jamie fans, as you’re probably more likely to see him at this restaurant than any of the Jamie’s Italians or Union Jacks. This in particular means it’s ideal for friends and relatives who love to go to restaurants that they can associate with a name they’ve actually heard of (pretty much all of our non-foodie friends immediately recognise the restaurant's name). So if you want to take out a non-foodie friend who’s impressed with a name and also get some decent food – this could be the place for you. We imagine the bar will start to get increased custom from locals too.

If I'm meeting people for a drink, where should I go?

In the immediate area, there's not a great deal, so the addition of a bar space makes Fifteen itself an attractive meeting point, even if you're not eating there. There's a good sized bar menu (see the gallery for what was on offer on our visit) and plenty of space to wait while the rest of your group arrives. We were also impressed by the cocktail list – the Paddington’s demise (their version of the breakfast cocktail) was a winner here.

However, if you fancy trying something else in the nearby area, there’s always Rotary, which is a few minutes away on the other side of the Old St roundabout and The Eagle, just around the corner on Shepherdess Walk, is also worth checking out.

When booking, where should we ask to sit?

We’d definitely recommend upstairs. Downstairs may have some slightly larger tables (and Jamie himself was entertaining a crowd there when we were eating), but upstairs, with its large windows and skylight letting in lots of light,  offers a much better dining experience. There, we’d also recommend sitting closer to the bar area.

That said, they do turn down the lighting a great deal later in the evening, to squinting-at-the-menu levels, something we hope they'll change. The room’s much nicer with a bit of light.

Alas, it is not, coming in at £4 for an admittedly fine selection of bread, including sourdough and focaccia with wild garlic (although expect this selection to change regularly). Perhaps the biggest attraction of the bread is that it comes with “chicken butter” which is made by mixing with a broth of chicken wings and has chicken skin mixed in. It’s a successful attempt at trying something new and the bread is worth ordering to try this alone.

As mentioned, if you’ve been to Fifteen before, expect a very different menu this time around. It takes its influences from the current vogue of small dishes created with very seasonal, and sometimes foraged, ingredients. As readers of Hot Dinners will know, it’s a type of menu that’s very much associated with St John alumni, so it’s not too surprising that ex-St John's Jon Rotheram has taken the cooking in this direction. So it’s very British and local.

The menu changes daily - a quick scan of today’s, two weeks after our visit, already sees a number of changed dishes (for example, a shellfish broth of scallops dumplings & beetroot is a new addition). However, from our visit, it’s already easy to see that a few dishes will remain favourites on the list.

One is the Dorset crab with fennel and dill on a rye cracker at £9 (perfect for sharing) and the braised peas with morels and Berkswell cheese at £11 was also a surprisingly great dish. Yes indeed, a cheesy peas dish that is actually very, very good. We think that both of those should be on the menu for some time and are well worth ordering. We did like the rhubarb & custard eclair, but it didn't quite live up to the eclair we had recently at Social Eating House.

The small dishes are priced around the £8-9 mark typically - you're best ordering around five of them. We didn’t go for the larger dishes on this occasion, but steak, lamb and rotisserie chicken were on offer for around the £20-£30 mark.

As mentioned, it’s worth checking out the bar for a cocktail before sitting down. There are a couple of London beers on tap, along with a wine list that starts at £5 for a 175ml glass or £20 a bottle (for a Sicilian chardonnay). There were also a couple of English wines on the list (we had one, but alas have forgotten its name) but we’d really like to see a few more, given the nature of the menu and the emphasis on British food.

We’ve only been to Fifteen for breakfast before, so we’re not best placed to say just how the place has changed and/or improved since the big revamp. However, we did think the menu was interesting, is bang on trend at the moment and had several dishes we’d order again without hesitation. We think it can safely be recommended and it's worth trying even if you're a little wary of Jamie's gaffs (and we know some of you are).

We particularly liked the room upstairs (if they could only keep their hands off the dimmer switch as night draws on) and if we find ourselves in the area, we’ll definitely be back for the bar snacks too (a baked potato cracker & beef & truffle mayonnaise sounds worth trying).

Fifteen can be found at 15 Westland Place, London N1 7LP . Find out more about Fifteen

Prices were correct at time of writing. Hot Dinners were invited to eat at Fifteen