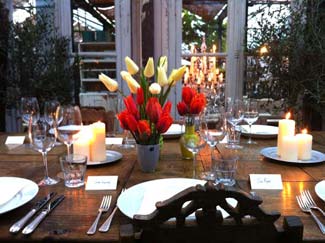 With all the hoo-ha surrounding Skye Gyngell's departure from Petersham Nurseries Cafe which she raised - however unintentionally - to Michelin-star status, it was always going to be hard finding someone to fill her shoes. Hot Dinners was invited this week to pop down to Petersham to meet the man they think can do that and more - Australian chef Greg Malouf.

Malouf left his popular restaurant Mo Mo in Melbourne to move to the UK and take over Petersham. "My focus at Petersham Nurseries Cafe will be on producing dishes that reflect and promote this quality, albeit in my own style," he has said. While Greg's been in town since mid-March, he's been observing his new team at work, getting to grips with the British seasons for food and has now brought in his full menu. Our meal there was a dinner unusually - they're normally only open for lunch, with the exception of a monthly evening supperclub - so we got to enjoy this rather magical space lit by candles and fairylights.

Much was made of the fact that Petersham, with its earthen floor, greenhouse setting, outdoor loos and nairy a tablecloth in sight had been given a Michelin star - but the setting really is heavenly and must be absolutely lovely on a sunny summer's weekend. Our dinner took in many of Greg's new dishes for Petersham but also included at least one he'd made a name for himself with back in Australia.

We kicked off with a pot of baba ganoush (best we'd ever tasted) served up with willowy spring veg and jou jou bread and then worked our way through a range of starters. Camone tomatoes with radishes, shankleesh cheese and tarragon, then red mullet with Jersey Royal potatoes, harissa and brik pastry followed by barbecued rabbit and chorizo salad with parsnip skordalia and - the best of all - quail with perfectly crisp skin served with organic chickpeas, pimentos de padron and ras el hanout spices.

Our two main courses were a really tender slow cooked lamb shoulder served with Freekeh - a grain somewhere between couscous and bulgar wheat - and Greg's signature dish - duck bistayeea, his take on Morocco's famous pigeon pastilla, served with a handprint etched in icing sugar on the top. Both were served with the prettiest salad we'd ever laid eyes on, covered in edible flowers. Dessert - and yes we had room - was a creamy Prosecco and French pear sorbet with cardamom wafers and lemon posset pavlova with rose and new season wild strawberries.

So what can we tell you about the food? Mainly that even if you do live miles away from Richmond (as we do) you should be making a note to dine there as soon as possible. That quail dish stands out as one of the best things Hot Dinners has eaten all year. The food is interesting in a really good way - without being challenging just for the sake of it. The staff are lovely and the setting is magical.

We can't think why we haven't been here before, but we're glad we've found it now.