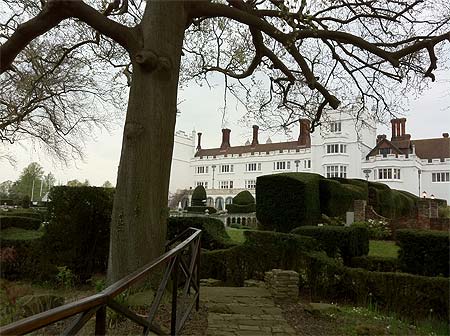 What is Adam Simmonds at Danesfield House?
Adam Simmonds is the fine dining restaurant at Danesfield House, a luxury hotel situated in a massive 19th century mansion overlooking a bend in the Thames just outside Marlow. As you'd expect in this neck of the woods fellow diners are either hotel guests or local well-to-dos, but they should include foodies looking for an out-of-the-ordinary hotel dining experience.

So - not central London, then. How do I get there?
Marlow's just outside the M25 West of London if you're driving - so an hour max from the centre of London.  And if you're taking the train, you can get to Maidenhead in half an hour from Paddington  followed by a 15 minute taxi to the hotel.  Either way, it's very easily accessible from London and there are a few more foodie places in the vicinity while you're there.

Who's it suitable for?
Certainly couples are probably the mainstay of business here - this is definitely a restaurant that would work well for a special occasion

Where should I meet my fellow diners for a pre-dinner drink?
There's an extensive cocktail list on offer in the hotel's cocktail bar with barman Adam Marks happy not only to go off-menu and mix you a classic, but give you the historical background to the drink in question. Our Tom Collins (@hotdinners2's default drink of choice) and Whiskey Anise Sour, a twist on the classic Bourbon Sour with home made star anise syrup, were impeccable.  Like the restaurant, the cocktail menu changes regularly to take account of seasonally available ingredients.

What should I expect when I walk in the front door?
Well there's one thing you won't get, which is the irritating hum of muzak. The dining room's recently had a makeover by doyenne of design, Anouska Hempel, so it's very - how should we put it - creamy. But that's an added bonus when you're probably expecting wall-to-wall oak panelling.

It's a small room - just 30 covers - but restaurant manager Karolina and her staff would thrill Fred Sirieix and Michel Roux Jnr with their faultless service, managing to be friendly and helpful without being over-chummy.

And where should we sit?
It depends on the time of year. We sat by the fireplace, but if it's a fine summer's evening you might prefer one of the tables with a better view over the gardens, down to the river.

Who's in the kitchen?
Adam Simmonds honed his skills working for Marco Pierre White at Les Saveurs and Raymond Blanc at Le Manoir aux Quat' Saisons. He spent three years in Wales at Ynyshir Hall where he earned his first Michelin star. In 2011 his work at Danesfield was recognised by the Good Food Guide rating the restaurant the 13th best in the country and in Simmonds earning Danesfield its first Michelin star.

If he's that good, why haven't we heard of him?
Good question. When we spoke to him the day after our dinner, Simmonds was understandably slightly irritated by how few critics travel outside London to review restaurants. Given that Danesfield's so close to town, maybe that will change soon.

What would you recommend ordering?
If you've come all this way to try the chef's cooking, you may as well go the whole hog and try the tasting menu. Usual rules apply - it's for the whole table and the cost of the seven course menu is £80.

We'd arrived just days after the switch to the Spring menu - it's changed four times a year - which meant we had the joy of trying one of the best dishes we'd had this year in or out of London - braised fillet of brill with wild leaf garlic pannacotta, peas, feves and morels. Visually it was a stunning dish, singing of the season yet blissfully unfussy, letting ingredients speak for themselves. Our only gripe was that the teeny tiny morsels of garlic pannacotta weren't bigger - they were utterly delicious.

Simmonds loves his sous-vide, which he used to great effect in the rabbit dish which he served up with white asparagus and a hearty application of spring white truffles.

The cheese board was one of the more interesting we'd tried in a while - we happened upon all the waiting staff getting a cheese masterclass while we were there, which might account for their enthusiam describing the various cheeses - and it's a nice touch having apple and celery sorbets to accompany your choice.

Desserts were confident yet equally simple in their construction - and if you are going off the a-la-carte, do try the banana and rum millefeuille with banana parfait if it's on.

Is bread included?
It is indeed, served with either salted or unsalted butter (and Hot Dinners very much appreciated this gesture, being only a fan of the former).

Any freebies on offer?
There are a few amuses throughout - our fave by far being the vodka martini with lemon ice and vodka jelly as we sat down.  Chilled cucumber soup with Yoghut foam was another winner.

What's the cheapest wine I could get away with?
Glasses start at £6.50 a glass or £23.50 a bottle for a South African chenin blanc or cabernet sauvignon.  An extra £55 will get you paired wines for the tasting menu.

Anything for vegetarians?
Absolutely, the chef will recreate the seasonal tasting menu specifically for vegetarians - rather than producing a specific vegetarian menu.  You should let them know in advance to allow this.

Can't be bothered to head back to the big city?
There's a whole hotel of rooms to choose from, so why not stay the night? We were put up in a deluxe twin room which had its own sitting room area and a Lord of the Manor-style view over the manicured lawns down to the Thames. It's a real treat knowing you only have to waddle upstairs after dinner. Best of all a quick dip in the massive indoor pool the next day made light work of any overindulgence from the night before...which we then undid by having the rather fine full English breakfast.

Overall thoughts?
If you have preconceived notions of what to expect from a country house hotel, prepare to be completely disabused by Adam Simmond’s work at Danesfield. The building may be something from another century, but the food here is very of the moment. Even the cocktail menu changes according to the seasons. It’s close enough to London for a lunch or dinner, but push the boat out and stay the night for the full experience.

Find out more about Adam Simmonds at Danesfield House

Prices are correct at time of writing. Hot Dinners was invited to eat at Danesfield House.