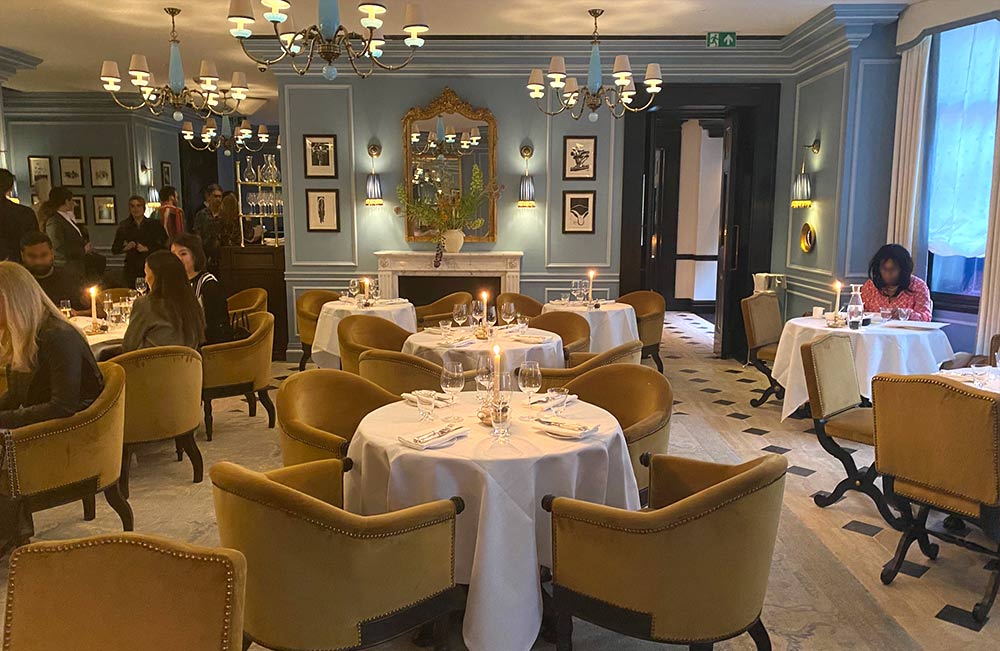 As you enter The Twenty Two restaurant, this is the first room you'll see.

What can you tell us about The Twenty Two?

The Twenty Two is a new hotel, restaurant and club right in the heart of Mayfair. In charge of things is their MD Darius Namdar who was behind the launch of Chiltern Firehouse and there's definitely an aim to bring some of the glamour of Chiltern to this new opening (which they seem to be already achieving, going by the buzzy vibe on our visit). He's brought in Alan Christie as Executive chef and Colin Kelly as Head Chef, both of whom were last seen together at the much-missed Picture restaurant, as well as top sommelier Roxane Dupuy (previously at the three Michelin starred Sketch).

So there's a lot of promising talent here, for sure. 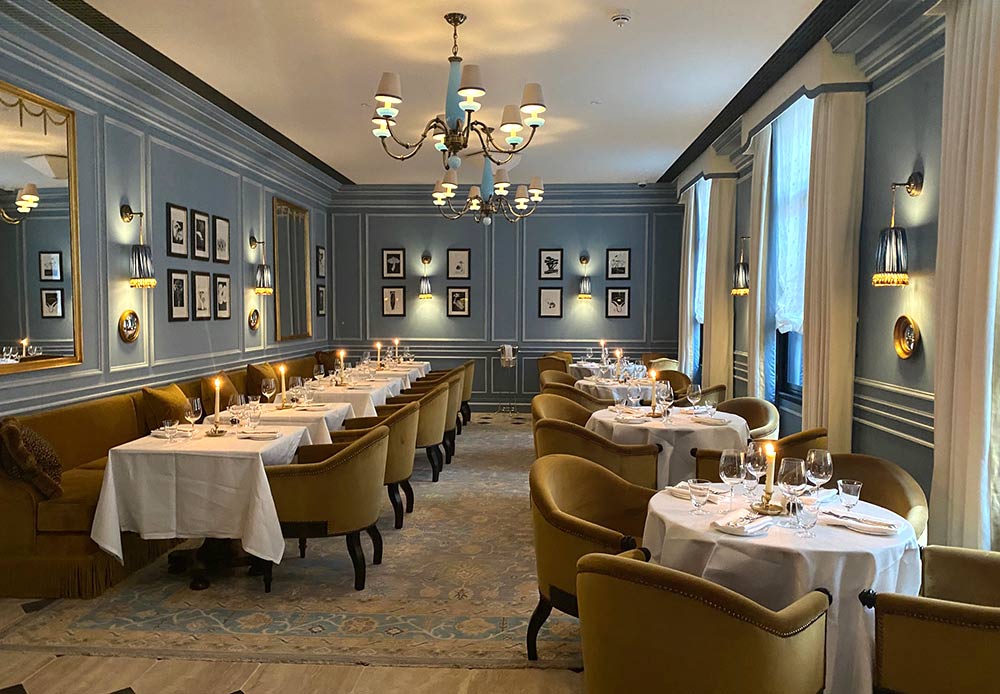 If you pass through the room above - this is what you'll find next.

It's just off Grosvenor Square, right next door to what was the old American embassy (soon to be a big new hotel itself), within a Grade-II listed Edwardian manor. So even before you head in the door, it all looks highly impressive.

There are two main rooms to The Twenty Two restaurant, both rather lavishly decked out (you can see them above). We'd say the best room to be in is the first one as you enter the restaurant - it just seemed to be the place to be. But if you're after something a little more private, head on through to the second room (which we'd say is also better for larger groups).

Start with a drink?

There is a small bar, which you'll find in between the two main rooms, but if we're being honest it feels a little more like a holding area for people waiting for tables than a standalone bar. It's the one area that we think still needs to find its identity. There are separate bars in the hotel and club, though - they might be a better bet, if you can get into them.

The cocktails we tried were both excellent, however, so even if you head straight to your table, make sure to look at this list first. 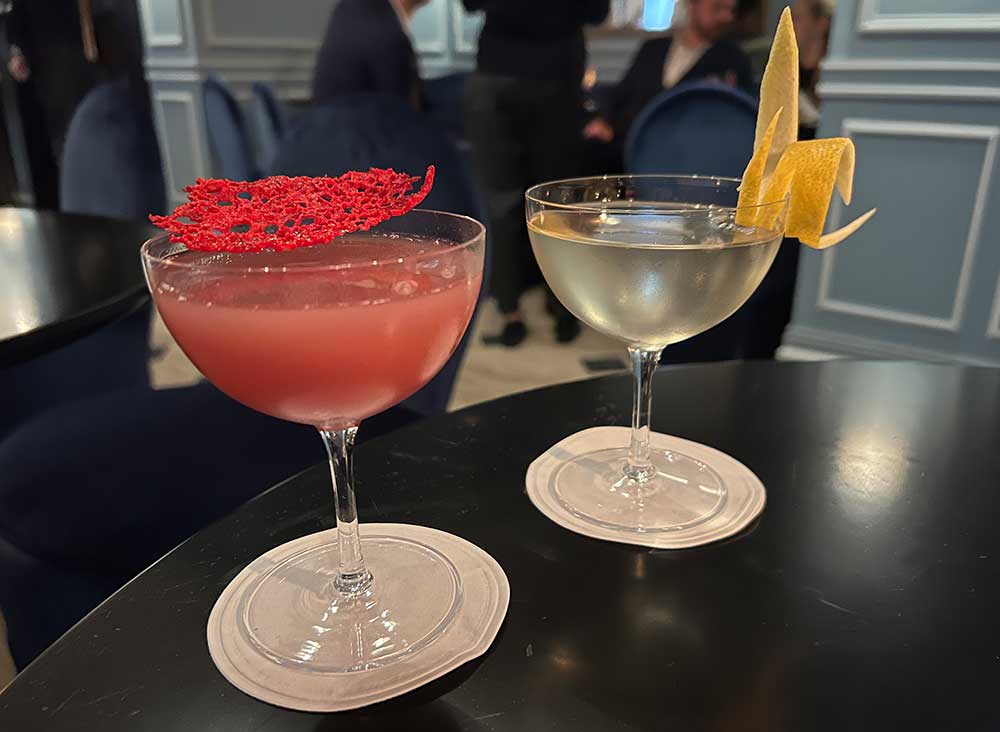 The menu has been put together by Picture alumni Alan Christie and Colin Kelly. Apparently, making the most of the lockdowns and the resulting delay in launch, they had been set up in a flat with the job of developing a menu for The Twenty Two over the past year. To that end, they've actually managed to work through all the seasons already (it's been a long pandemic) and be prepared in a way that we imagine would make many other chefs rather jealous.

As a result, the food on offer is extremely accomplished. So much so, that we think that the menu could actually sing the food's praises a little more than it does - the bald descriptions actually undersell it.

Here's a taste of what's on their first menu: 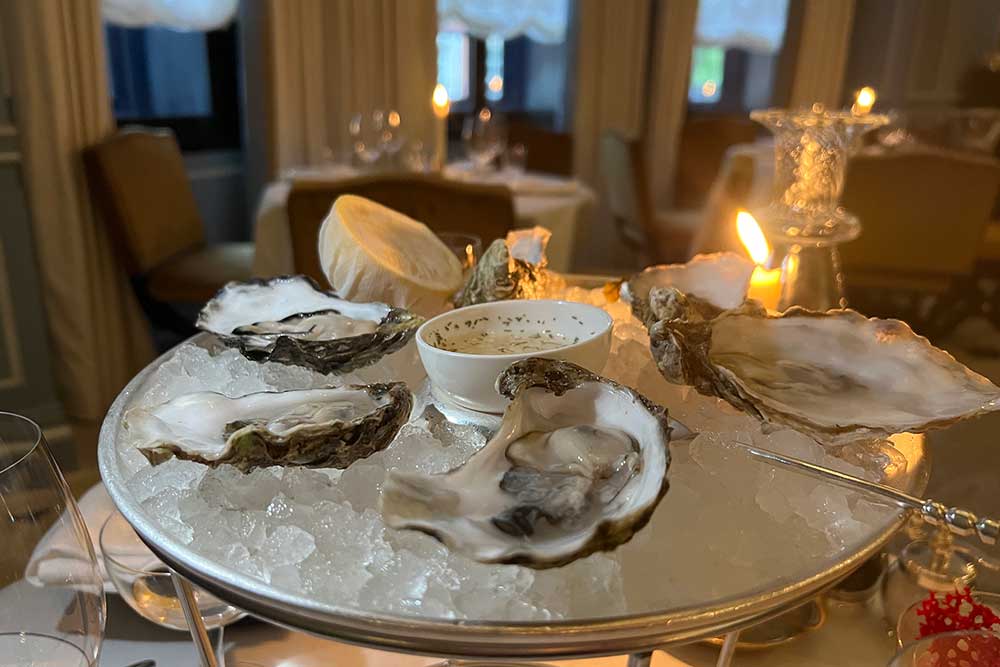 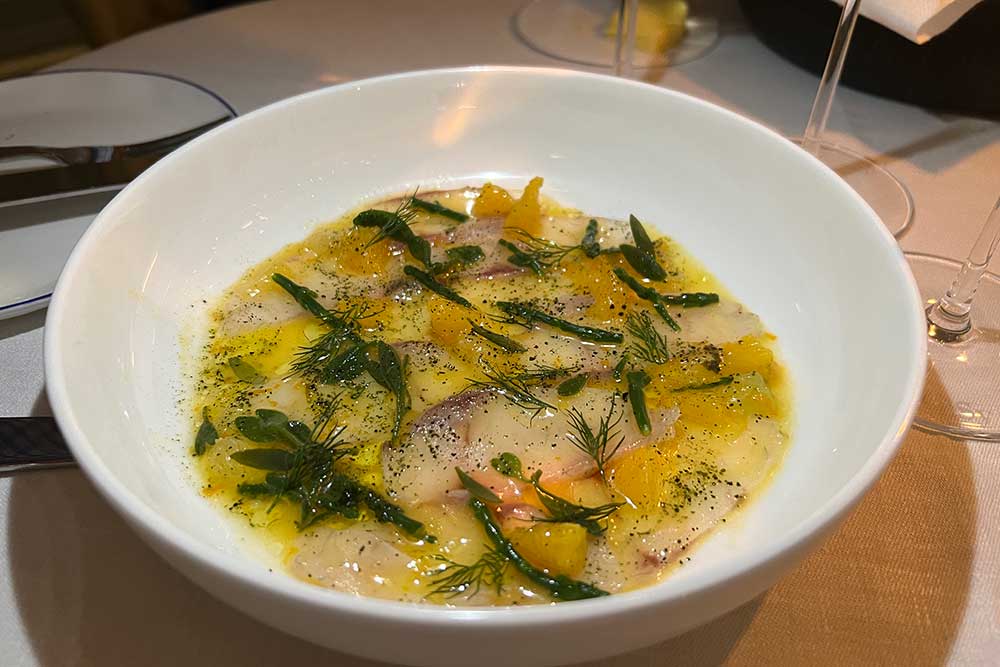 Sea bream crudo, citrus dressing (£13) - the first sign that we were in for something quite special. 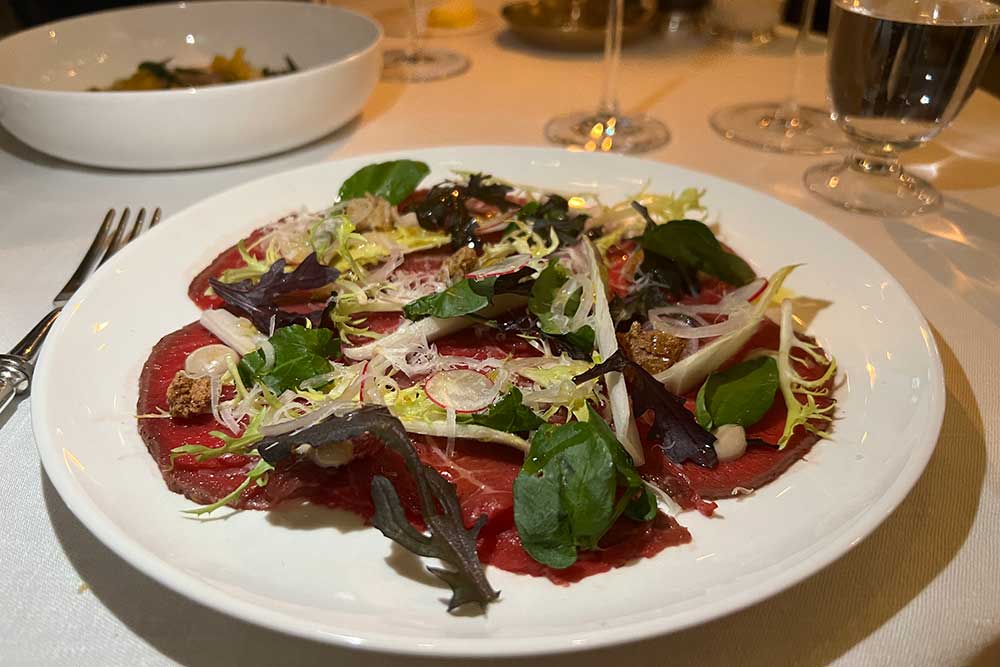 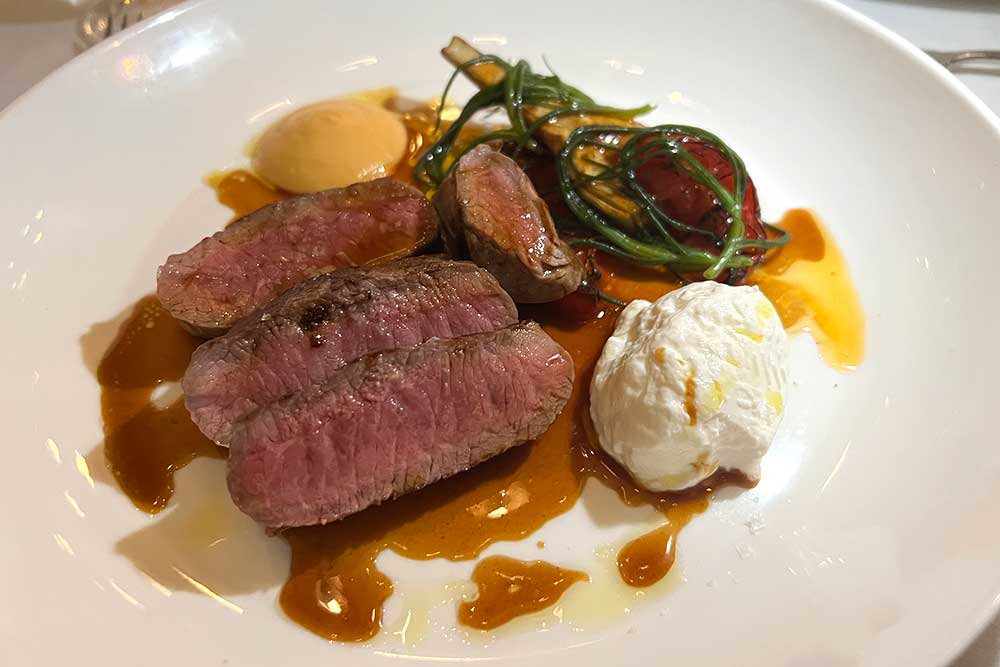 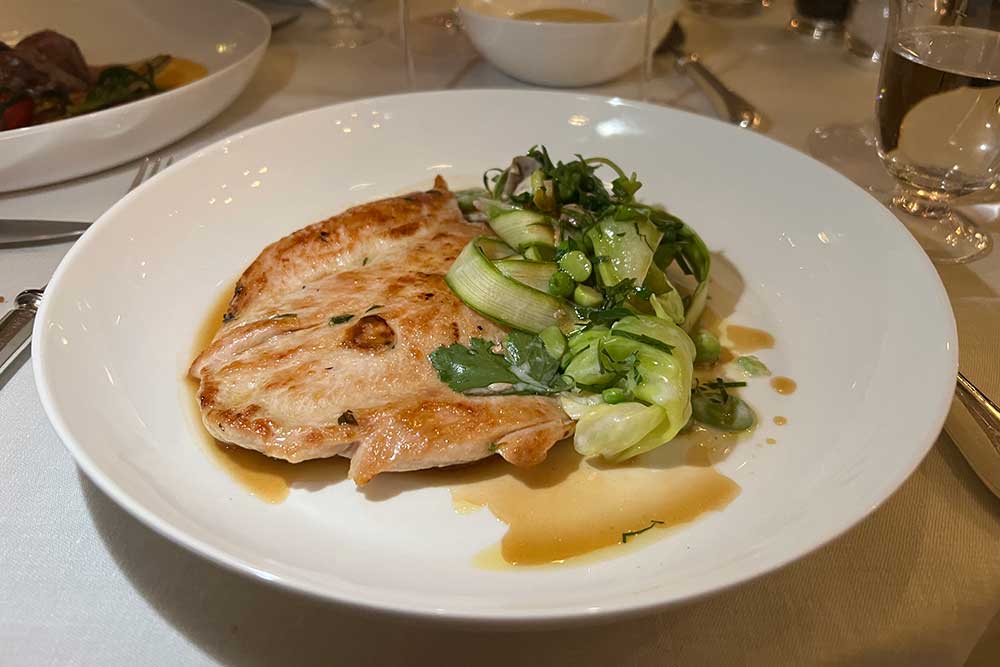 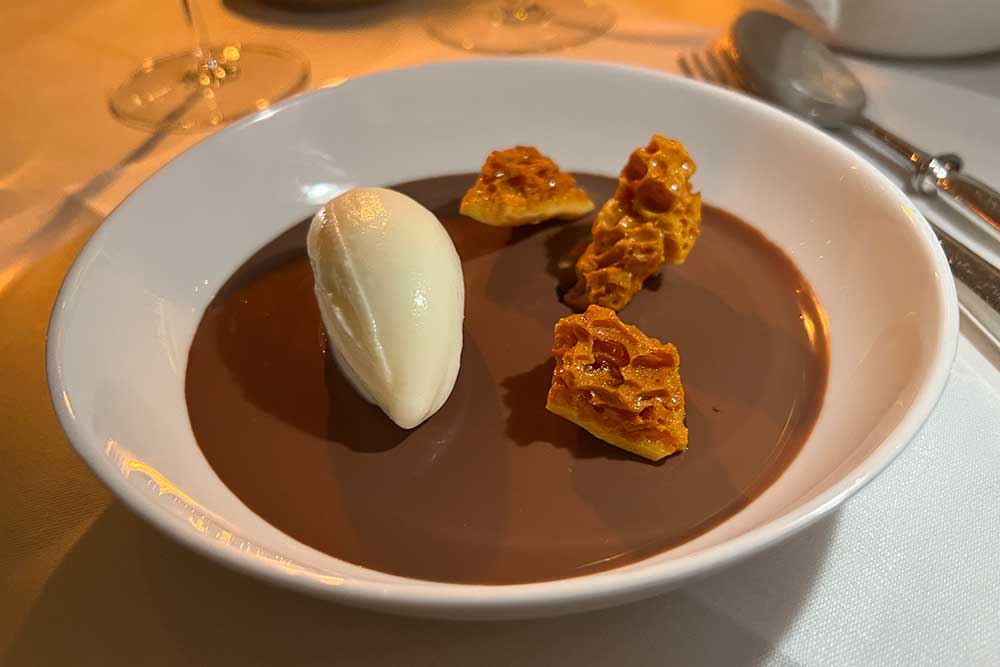 Chocolate cremeux with honeycomb and milk ice cream (£8) - with the honeycomb swimming in a pool of thick cremeux. 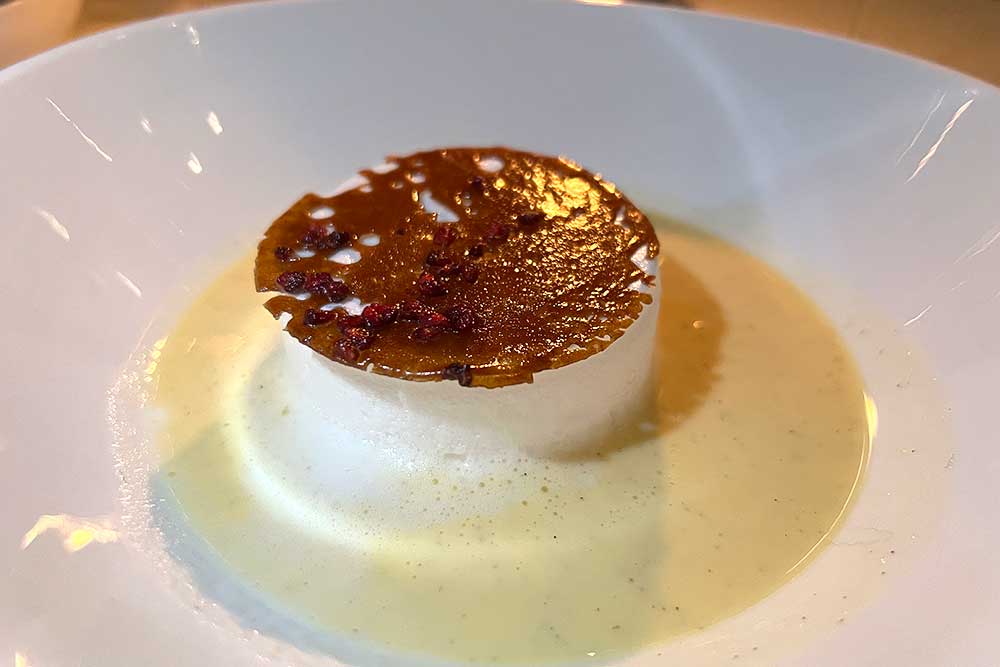 Iles flottante (£7)  - always a must-order on any dessert menu and the bruleed top was a nice touch, along with the hidden scoop of lemon curd inside.

Anything else we should order?

In addition to the above, there are vegetarian dishes like their charred heritage carrots, young leeks, smoked almonds and romesco sauce (£22). There are also some larger sharing dishes like a whole baked Cornish John Dory, a salt-baked organic chicken or a chargrilled grass-fed ribeye.

As you might imagine from any new members club/restaurant hybrid opening in the heart of Mayfair, the wine list here is rather special. To make the most of it, a pairing by sommelier Roxane comes highly recommended. We particularly liked how ours was split so that we each had a mini pairing for the other diner's dishes - something we hadn't encountered before, but which was a lovely touch.

Being honest, we weren't quite sure what to expect from The Twenty Two - would it be a matter of style over substance? But we left very impressed. Mere weeks after opening, it already had the feel of a proper Mayfair scene - packed on a Saturday night. That's something that's hard to achieve, so it speaks volumes that they've pulled it off so quickly. Pair all that with excellent drinks, a huge tome of a wine list (with a top-class sommelier to go with) and what we feel was a genuinely great meal, we think this really has a very good chance of being the Chiltern Firehouse of Mayfair.

Hot Dinners ate as guests of The Twenty Two. Prices are correct at the time of writing.

More about The Twenty Two

Where is it? 22 Grosvenor Square, London W1K 6LF