[SIGPLUS_EXCEPTION_SOURCE] Image source is expected to be a full URL or a path relative to the image base folder specified in the back-end but /blog/2012/parcel-yard/gallery is neither a URL nor a relative path to an existing file or folder.
0
Shares

The Parcel Yard is a haven in King's Cross 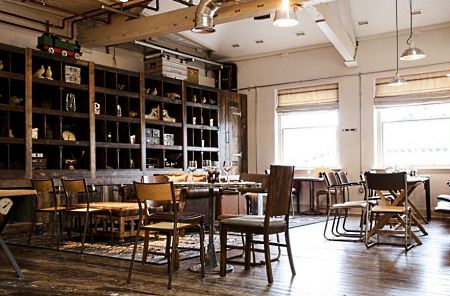 We've mentioned elsewhere that King's Cross is going through a significant reinvention at the moment (and we hear there's plenty more to come, too). As part of checking out the new digs, one of the first places we've been to is the new Fullers pub, the Parcel Yard, where we were invited to try out a special menu from the chef.

Now it's easy to be dismissive of a pub in a station, but it's immediately obvious that this isn't your standard railway tavern. The pub has taken over a grade 1 listed building that used to be a postal sorting office and completely restored it, while retaining the main structure of the classic architecture. The pub can fit hundreds, but neatly avoids the cattleshed feel of many station venues by being split into several different rooms. There's the large central section with its huge glass ceiling as well as many side rooms on both floors (we're already a fan of a small room inside the main door that feels like you're having a drink in someone's living room circa 1940).

All this is backed up by some arctic air conditioning which was much loved when we visited (during the recent mini heatwave) and would be worth remembering if summer ever returns.

As to the food, we were treated to a menu that let Head Chef Raymond Corrie show off a little using the main restaurant food as a starting point  Of that, a particular standout was the salt marsh lamb neck fillet, capers bacon lardons, peas, lemon thyme which we'd love to see on the menu full time.

But while the chef was able to show us what he could do, it's always good to try something that's on the main menu. So we popped back the very next day to try it out again. This time we just had a couple of snacks - and we were very impressed. The Scotch duck eggs and crackling were a perfect bar snack - perfectly soft yolks as expected and good value for £6.50. But we were really impressed by the chips - frankly some of the best we've had in London and worth heading back for in a heartbeat.

So, in summary, Parcel Yard's a quantum leap away from London's usual station venues and hopefully a sign of things to come.