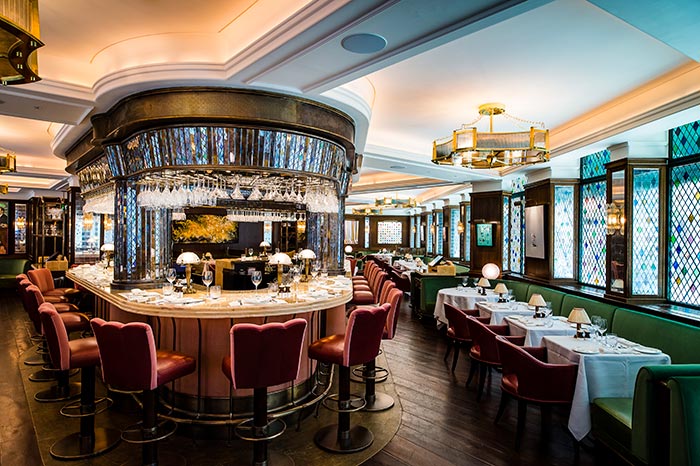 What can you tell us about The Ivy?

So this is a refurb, yes?

Yes - but also much more than that. They've essentially gutted the original fittings and most of the paintings (auctioning them off for charity) and have started from scratch. What remains is the triangular shaped room and the stained glass windows.

If you've been before, the first big change is the removal of the poky entrance and the front bar, relocating it to the centre of the room as a focal point, with the rest of the tables around the outside. This is intended to democratise the room a little, making there any not-as-good tables less obvious. That seems to work in the main - but we'd still avoid that table right inside the front door if we could.

We have to be honest - we'd never actually been to the Ivy before its revamp so we don't have the point of comparison that their regulars will have. But it certainly looks the business, with a shiny new design by Martin Brudnizki.

Who is it suitable for?

It'll definitely be a haunt for media types, we think, as well as the odd thespian. But also expect this to become another restaurant-to-visit for special occasions again. There's no doubt that going to the Ivy has the feel of a special occasion and that feeling continues when you're inside. Waiters are buzzing around and there's generally a very convivial feeling throughout the restaurant. We honestly weren't sure what to expect from the refurb, but this overall vibe from the room is really the Ivy's secret weapon, more so than the food (but more from that in a bit).

If you're a member or can get an invite, then upstairs in the Club is the most obvious answer. There are a few tables here for drinking at, but as most of it was laid out for eating earlier on, we'd suggest that might be harder to guarantee a space. The easiest bet would be the nearby Polpo at Ape and Bird.

Looking around the room, we'd say the best place seems to be under the Damien Hirst painting to the right at the back of the room facing the door - it's where most of the attention seemed to be. And the booths at the back looked pretty good too. There's also the new option of counter dining here too.

The new menu has had a bit of a shake-up, attempting to bring the Ivy up to speed with new restaraurant trends without getting rid of the dishes that regular clientele love so much. And by and large it succeeds. There are still plenty of classics (handily marked up as such) on the menu, so you can still get their famous Shepherd's Pie if you really want to try it (although as it's now on at the Ivy Market Grill too - we'd suggest going for something else). You can also go for a simple steak - but we really think it's worth looking more closely at some of the new dishes.

Of what we were able to try of the fairly large menu, particular highlights were:

And how about the drinks?

There is a lot to like on the drinks menu, not least because of the brevity of a well-edited wine list. We kicked off with two excellent cocktails - their take on a Twinkle, the Lapérouse - St. Germain Elderflower liqueur, Cherry blossom-infused Lillet Rosé, Champagne (£14.50) - stood out. Our carafe of Burgundy from Domaine Michel (£28.50) was a winner, but the best was a glass of Secateurs Chenin Blanc from A A Badenhorst (£9.50).

We'll be honest with you, we felt a considerable amount of trepidation going into The Ivy. With such a reputation behind it and a lot riding on the expensive refurb - what if it didn't live up to the hype? But despite those reservations, The Ivy easily won us over.

The new menu works well but it's really the surroundings that make the place more than the food. Coming here really feels like a special occasion, but with prices that ensure you're not going to break the bank. So any ideas you might have about this place not being up to scratch in such a competitive London dining scene are swept away once you sit down and drink in the atmosphere.

So yes, a worthy revamp and one that will hopefully kickstart another 100 years for the Ivy.

Hot Dinners dined as guests of The Ivy.