[SIGPLUS_EXCEPTION_SOURCE] Image source is expected to be a full URL or a path relative to the image base folder specified in the back-end but /blog/2013/naamyaa/gallery is neither a URL nor a relative path to an existing file or folder.
0
Shares 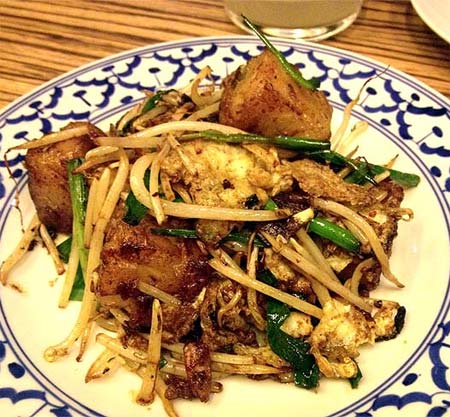 What can you tell us about Naamyaa Cafe?

Naamyaa is a Thai cafe from Alan Yau, the man who launched such London mainstays as Hakkasan and Yauatcha. Naamyaa is, according to Yau, aiming for an authentic Bangkok cafe theme with an eclectic menu that ranges from laksa to burgers and chips (Yau stresses that the latter would be available in Bangkok - hence their inclusion here). The Islington branch is likely to be the first of a few Naamyaas to open around London (Yau is also behind the Busaba chain).

It's on the ground floor of the Angel Building in Islington, on the same block that also hosts a Hummingbird Bakery and a huge Jamie's Italian. It's just a few steps from Angel Tube station.

Naamyaa is a more casual affair than you might get at somewhere like Yau's previous central London ventures, and it's packed out as a result. The no-booking policy may put a few off, but the restaurant is huge so - on weekdays, at least - if you have to wait, we don't think you'll be waiting that long.

There are a lot of tables for two people, so it's definitely a potential date place, but be warned the majority of those face outward towards the kitchen - so while you won't feel your neighbours are listening in, the tables are a little "on display". There's plenty of counter dining in front of the bar too, something we always like to see.

There are plenty of pubs in Islington, and even a decent bar in Jamie's Italian next door (there isn't a bar at Naamyaa itself).

However, your best bet by far would be the Charles Lamb pub, about 5 minutes away. It's one of the nicest pubs in the area, with a good selection of beers on tap. However, be prepared to fight off the temptation to eat there too, as the smell of their cooking made it hard to leave the place when we popped in.

As it's a no-booking establishment, at busy times you'll just have to take what you're given. If, however, you have a choice then we liked the tables by the window facing the kitchen. We also note that there will be outside tables which will be a boon come Summer.

What about the food itself?

The menu at Naamyaa takes some getting used to, being split into several sections so we weren't quite sure where to start (when we ordered, our waitress pointed out a whole section of the menu that we'd managed to miss).

The small plates section is probably the easiest to get to grips with and, on our visit, delivered the most successful dishes of the night. A particular favourite was the "Changmama’s pan– fried turnip cake". This was not something we were immediately drawn to on the menu but, after nudges from the waitress, ordered it alongside the Thai Calamari Jasmine tea smoked baby back pork ribs. The calamari was fine, but the real winners were the ribs (sweet, sticky and falling off the bone) and that turnip cake. The cake and beanshoots were a real eye-opener and something we'd definitely order upon returning. It also showed a lightness of touch with the spices that made us feel we could be a little more adventurous with the mains.

The mains are divided into several sections - rice, noodles, soups and naamyaa (plus the western dishes that we steered clear of). The naamyaa was, alas, where we made our big mistake. We're probably a bit too timid when it comes to spicy dishes, and should have heeded the warning that the beef naamyaa was going to be a bit on the hot side. Unfortunately, it was so hot that we weren't quite able to judge just how good the other dishes were. The first of these, a seafood laksa was one that we'd like to try on a return trip, but we honestly couldn't taste the soft shelled crab after that beef naamyaa. That said, clearly there's going to be something on the menu for the more adventurous of you.

Things calmed down more with a dessert that we almost missed due to slight over-ordering, but were very glad that we changed our mind. The spiced pineapple crumble and caramel ice-cream pudding was excellent - beating desserts that we've had in more upmarket restaurants in the past year. Order judiciously to ensure you make it this far.

It isn't (and if you're going for the laksa, then you definitely don't need it) but there are plenty of snacks to choose from, like Thai crackers and banana chips which will all keep you going.

We started things off with two very fine cocktails at £8.50 apiece. The Sawa Dee (vodka, lychee, lime and lavender foam) was a clear winner over the pear negroni. Both were good, though, as was the wine list - with prices ranging from £20.50 (False Bay Chenin Blanc) to £95 (Ostertag Pinot Gris) and plenty of options in-between. There's a good selection by the glass and carafe, and the Petra Unger Gruner Veltliner at £19 for a carafe was a good choice.

Naamyaa Cafe is already attracting a big crowd, despite having only opened a few weeks before we went. It's a good bet for a buzzy night out in Islington, an area which has been continually improving food-wise over the last year. Being Islington residents, we'll probably go back soon, certainly to try that turnip cake or a slightly cooler main.

Find out more about Naamyaa Cafe

Prices were correct at time of writing. Hot Dinners were invited to eat at Naamyaa Cafe.