[SIGPLUS_EXCEPTION_SOURCE] Image source is expected to be a full URL or a path relative to the image base folder specified in the back-end but /blog/2013/texture/gallery is neither a URL nor a relative path to an existing file or folder.
0
Shares 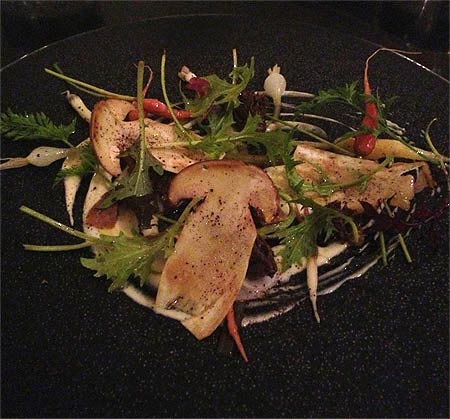 What can you tell us about Texture?

Texture’s Icelandic head chef Agnar Sverrisson and French master sommelier Xavier Rousset met whilst they were both working at Raymond Blanc’s Le Manoir Aux Quat’ Saisons in Oxford. In 2007 the pair left the two Michelin star restaurant to set up Texture, which won its own star in 2010. The food served is a Scandi-European fusion with Sverrisson focussing on ingredients from his native Iceland as well as local British produce.

Why are you visiting now?

While the likes of burgers, fried chicken and hot dogs are adorning menus across the city, Texture is offering something a little lighter. A temporary raw menu priced at £79 is now available at lunch and dinnertime until the end of August.

Just off the shopping mecca of Oxford Street, Texture is on Portman Street – just a two-minute walk from Marble Arch.

Where should I go for drinks before?

While there are shops aplenty, watering holes are far and few between in this area of the West End. The Three Tuns is a great little pub just a two minute walk away, while Indian street food restaurant Roti Chai serves cocktails such as a rose and lychee martini and ginger pineapple bellini. If you want to stay close to home, Texture has a champagne bar; you can indulge in a pre-dinner glass for £10 or a cocktail from £9.50.

Try and get a seat near the book cases which separates the dining room from the champagne bar, this way you capture both the buzz of the bar and tranquil calm of the restaurant, with views of the wine cellar and kitchen too.

There are not one, but two complimentary bread baskets. The first, a basket of four different crisps with wafer thin potatoes, pure parmesan slice, toasted rye and crisped cod skin. After this comes soda bread, large thick slices with a chewy crust and soft pillowy dough, served with a butter that is whipped with Icelandic yoghurt to create a smooth mousse.

What’s on the menu?

The raw menu consists of seven courses, taking you from vegetable dishes, through to fish courses then on to meat, more vegetables and finishing with dessert. All raw of course. Aggi Sverrisson’s Scandinavian influences are still seen throughout but with a twist of Asian flavours.

Whilst the initial pea and mint course sounds like a side dish to granny’s Sunday roast, the course was a surprise of mint soup with fresh peas and shoots, pea hummus, mint ice and civet powder – yes that coffee that is famously prepared for roasting after passing through the digestive system of a civet cat. The English asparagus dish, served in a lemon vinaigrette with hazelnuts and fresh herbs, was refreshing like a light spring soup – we just wonder what Chef will do when the English asparagus season is over, you may well see a new dish after this time to replace the seasonal one.

The first of the fish courses was a ceviche of salmon served with a sweet passion fruit snow, cucumber, mooli and cashew nuts in a bonito (a type of fish) broth. While the fusion of different flavours and textures was interesting, the simplicity of the second fish dish, yellow fin tuna sashimi with soy, ginger and coriander, made it the favourite for us.

The one and only meat dish did not disappoint, beef tartare, made using Hertfordshire ribeye, served with sorrel, balsamic and rocket had a delicate meaty flavour with a punchy, peppery mustard kick. The last of the savoury dishes took us back to vegetables one last time and while spring vegetables sounds like a side dish, it turned out to be the star of the show. A delicate array of raw vegetables including mushrooms, carrots, leeks and spring onions on a creamy artichoke puree – so humble yet a beautifully prepared and executed dish.

Come dessert we’re usually always ready for some good old-fashioned stodge and ice-cream but a refreshing dessert of passion fruit with a lemongrass jelly and basil sorbet turned out to be welcome after the filling six courses and bread which preceded it.

Drinks aren’t included in the £79 price tag. You can either choose your own wine from the extensive wine list or ask the sommelier to choose five wines to match the dinner for an extra £52 per person. On our visit we had a great glass of Austrian Riesling which is grown in a cooler climate than German Rieslings making it less sweet, a little more dry but still with floral notes. We also tried a glass of pinot noir from Oregon – a light wine with a fruit and spice finish.

The meal could be considered a diet menu but whilst feeling heavenly and healthy, unlike most diet foods the tasting menu at Texture was both filling in appetite and fulfilling in flavour. The raw menu is imaginative with many unusual ingredients and touches – it was light, refreshing and with an incredible assortment of flavours and textures.

Texture is at 34 Portman Street, London W1H 7BY. Find out more about Texture

Prices were correct at time of writing. Hot Dinners were invited to eat at Texture.