Test Driving the new weekday breakfast at The Ivy 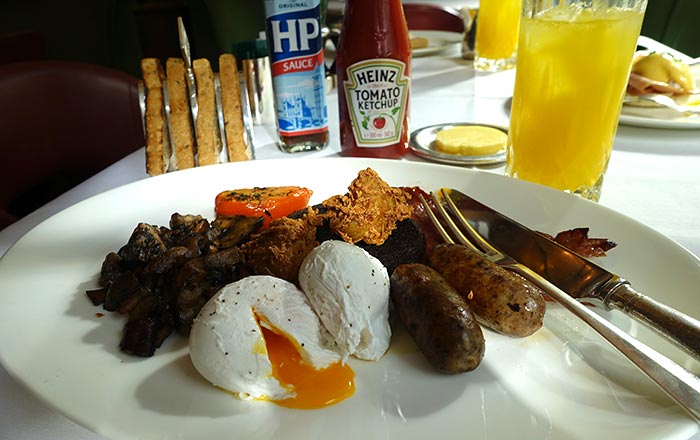 So, the Ivy's doing breakfast then?

Yes, for the first time in 100 years this London institution has opened its doors for weekday breakfasts. And with the documentary on the Ivy's recent refurbishment having just aired on TV, it seemed like a good time to return to check it out.

A helluva lot. There are sections for fruit, baked goods, eggs, cereals savouries and sweet - as well as a more modern section for super seed bowls. And then there's the two big ones - the full English and its vegetarian alternative.

There are numerous juices and smoothies on option - we may have to return to try the Morning Tonic (with lemon, cayenne, turmeric, agave, cider vinegar and sparkling water). As for coffee, the beans come from British roaster, John Street Beverage, or you can opt for specialist teas from The East India tea Company. Our coffees were notably good - shaved chocolate on the cappucino was a nice touch.

We kicked off with a plate of viennoiserie - most of which are made in-house, the best of which was a custard and fruit danish. One of us then went all out and picked the Full English (£16.50) which, as you'd expect, was perfectly executed with the addition of some insanely good spiky hash browns.

We also tried a single (and lovely) Eggs Benedict (£6.75) and avocado served with toast fingers (you can choose whatever bread you prefer, including sourdough - although on the day we were just given a white/brown option) and nicely spiced up with chilli and lemon. (£6.50).

The dining room here is particularly lovely first thing in the morning, flooded with light that's diffused through those stained glass windows, so everyone looks good no matter how late they were up the night before. Expect this to swiftly become the power breakfast place of choice in this part of town.

The Ivy is at 1-5 West St, London WC2H 9NQ Find out more about breakfast at The Ivy

Hot Dinners were invited to The Ivy. Prices were correct at the time of writing.