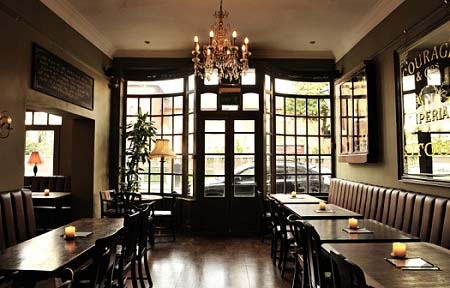 Why's The Mall Tavern of interest?

The Mall Tavern has quietly grown in reputation as a neighbourhood joint worth travelling to. Chef Jesse Dunford Wood has trained up under some top names including Sydney's Mark Best, Michel Roux Jnr and Rowley Leigh. This year he was named Rising Star in the Tatler Restaurant Awards and when he invited Hot Dinners to come and take a look at what he was up to, we couldn't resist.

On a quiet side street just around the corner from Notting Hill tube.

Being North Londoners, we've had scary experiences heading into Hedge Fund territory, but the first impressions of the Mall Tavern were great. There was a mixed age crowd of drinkers and eaters and we felt immediately at home.

Where should I meet my fellow diners for a pre-dinner drink?

You might as well come straight here. In the summer, drinkers pile out on to the street outside, and there's room to prop up the bar in the front room. There's also a smallish beer garden with seats for around 20 people.

The tavern has two main rooms - the front room includes the bar, while the back room where we sat was more of a dining room. We preferred our space for eating - but the best table in the house has to be the chef's table in the kitchen.

A chef's table in a pub?

Well that shows you the Mall Tavern isn't your run-of-the-mill gastropub. Technically the chef's table is in a room across from the kitchen, but you're more than able to hear orders being bellowed and when we were there, the table was being used by the editorial team for Restaurant Magazine which is a pretty good recommendation and we know Russell Norman from Polpo's recently been.

There's also a private dining room where you can order feast menus including a whole roast suckling pig (swoon!).

Jesse's pretty clear about his signature dishes and when we omitted to order certain things, he sent them out anyway. The smoked salmon is smoked on the roof of the tavern and is served, sliced thickly, but delicately-flavoured. From the mains, you'll have to try the Desperate Dan-style Cow Pie - a huge dish with a hollowed out bone as the pie vent, great gravy and falling-apart tender pieces of beef.

Whatever you do, don't forget to order the chicken Kiev which Dunford Wood has rescued from ready-meal status and turned into a triumphant ball of roasted garlic butter and breaded chicken loveliness.

For desserts, you'll probably want to try an Arctic Roll, the mere mention of which will have those over a certain age rolling their eyes and younger diners none the wiser. Essentially this is ice-cream rolled up with sponge and a thin layer of jam to keep the two stuck together - but here at the Mall Tavern you can choose from a variety of flavours, which when we were there included After Eight, muscavado, chocolate, rose and strawberry and curry. Naturally we went for the curry among others which was much nicer than it sounds. But we reserved our top dessert plaudits for the small bowl of salted caramel chocolate rolos, the arrival of which produced some unseemly elbowing at the table as we all tried to get our fair share. Tip: Don't nip out for a sneaky fag in the garden at this point and expect there to be any in the bowl when you return.

It costs £1 for soda bread and butter, but that's a small price to pay for the fresh, treacle-brown bread that gets served up.

What's the cheapest wine I could get away with?

The house white and red (both Italian) are a very reasonable £16.50. We went for the Picpoul at £24.25 which is one of those please-everyone wines that went brilliantly with both the seabass we had and the chicken kiev. If you're off the sauce, there's a particularly good selection of mocktails and retro drinks such as dandelion and burdock and rose lemonade to choose from.

Lots. We could have picked carrot cup 'o soup, mushroom and chestnut pate, heritage tomato salad with parsley flatbread - there was plenty to choose from.

Apart from wishing fervently that this whole pub could be transported lock stock and beer barrel to North London so we could have it as our local, we thought The Mall Tavern was pretty much the perfect London gastropub. It's packed full of character, the staff are uniformly cheery and helpful and Dunford Wood is serving up excellent food that anywhere in London would be good value, but in this neck of the woods is great value. Next time, and there will be a next time, we'll come with a whole group of us and take over the kitchen table.

Find out more about the Mall Tavern

Prices are correct at time of writing. Hot Dinners was invited to eat at the Mall Tavern.