[SIGPLUS_EXCEPTION_SOURCE] Image source is expected to be a full URL or a path relative to the image base folder specified in the back-end but /blog/2012/kitchentable/gallery is neither a URL nor a relative path to an existing file or folder.
0
Shares 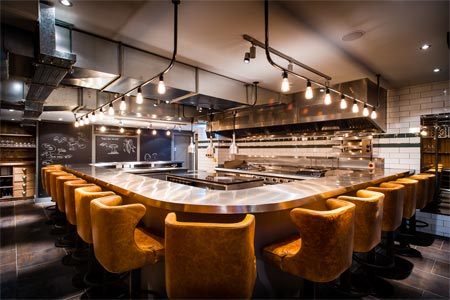 What can you tell me about it?

Kitchen Table is a labour of love from former Ledbury chef James Knappett and his wife, sommelier Sandia Chang. Way back in April, we chatted to James to hear his vision for the restaurant. Six months later his Brooklyn Fare-inspired restaurant has finally opened its doors. Sort of.

In practice, that means that although there are 19 seats, there are currently two sittings over the course of the evening. In a month or so this will expand to three from 3 - 6pm, 7pm and 9pm. But although there are sittings, they're really staggered bookings, so you'll have your seat for the night. And it's just dinner right now with a lunch service planned for towards the end of the year.

At the back of Bubbledogs on Charlotte Street - through a leather curtain and into a different world.

Where should I meet friends?

Definitely not at Bubbledogs - there's always a wait for seats. Instead, pop around the corner to the basement bar at Dabbous for decent cocktails, or perhaps Draft House Charlotte for a beer.

There's no a-la-carte, when you go in a list of ingredients is written up on a blackboard on the wall and on the menu (hand-illustrated by James). It's entirely dependent on what goodies are brought in by James's fish, meat and foraging contacts. He creates the menu afresh each day once he knows what he has to play with.

When we went those ingredients were; scallop, cod, chicken, pork, cauliflower, tomato, lobster, mackerel, venison, beef, burrate, cherry, pear and blackberry. What that then translated to was the following:

Each course, which has been prepared in front of you - so you see the plating up, the blowtorching, the searing as it happens, is then presented with a few words from James - a succinct description of what the ingredients are and what exactly he's done to them before it hit your plate. From these dishes, moments that stood out were the textures of cauliflower - crispy, raw, pureed, an incredible array of the same ingredient treated very differently; the thin shard of crispy chicken skin studded with scented marscarpone and nuggets of chewy, salty bacon jam and the blackberry tea cake which was ungainly to eat but a really fun take on the often prissy tea cake.

As you might imagine from Sandia, who put together Bubbledogs' wine list, there's a lot of interesting champagnes on this list. Prices start at £9 for a glass of Hush Heath Rose or £10 for champagne. On the wine front you can get a glass of Gruner Veltliner for just £6 or it's £6.50 for a glass of Fruili. After that, it's a relatively succinct list with wines ranging from £34 for a bottle of Croatian white to £149 for a 2008 Montrachet with plenty of interesting choices in between.

There are 19, very comfortable leather high chairs here all set at a counter around James's kitchen (the state-of-the-art induction stove means you won't be singed by the heat). Each place has been marked up with reference to how chef Thomas Keller marks up his pass at the French Laundry where both James and Sandia have worked. And wherever you sit you'll have a great view of what's going on.

So how much will this set me back?

Dinner is £68 without wine which for that many courses and standard of cooking is really great value.

A meal at Kitchen Table is quite an experience - and we can imagine these few seats becoming almost as difficult to book as a table at Dabbous. It's definitely aimed at people who are into food and love hearing about unusual ingredients and seeing what James and his team can do with them. It would impress visitors, or foodie clients or friends who love interesting food. James is intensely enthusiastic about his cooking in a way that encourages conversation and questions rather than killing it stone dead by being too serious, so the meal becomes a dialogue between chef and diner. Come with a very empty stomach and settle in for an evening of extraordinary dining.

Find out more about Kitchen Table

Hot Dinners were invited to eat at Kitchen Table. Prices were correct at time of writing.