Test Driving The Guinea Grill - steak and history in Mayfair 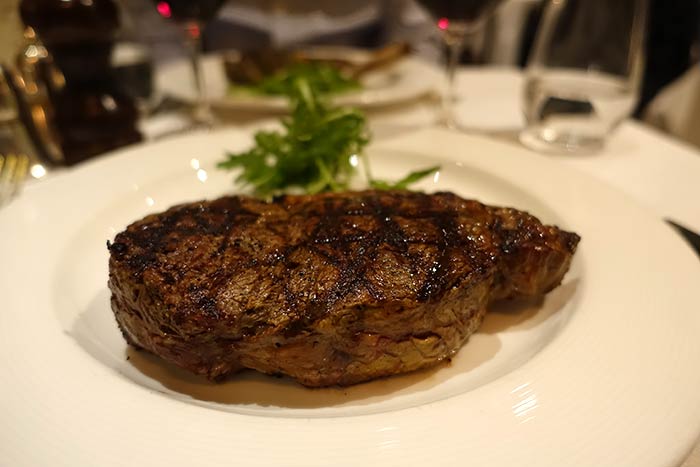 So what do we need to know about the Guinea Grill?

Well, it has been around for a fair old while. Not only has there been an inn on the site since 1423, but it's been a Young's pub since 1888. And it might have remained a standard old London boozer were it not for the foresight of a pub tenant from the early 1950s who, discerning a desire by American tourists hitting London for a decent steak, took to serving up the best Scotch beef. Since then, the pub has prided itself on its steaks, selling only Scottish and English beef provided by Highbury butchers Godfrey’s, who have a dry aging room dedicated to the Guinea, and Solent butchers in Portsmouth.

Tucked down a little side street off Berkeley Square

If it's been open for so long, why are you only trying it now?

We've popped in for the odd drink, but the arrival of new pub manager Oisin Rogers is what finally brought us down to try the food at the Guinea Grill. Rogers was pub manager of the Ship in Wandsworth before relaunching the Canonbury in Islington and is also a partner in the growing Dip & Flip chain in South London.

He knows he has a very loyal clientele here at the Guinea (the place was HEAVING when we visited on a Tuesday evening) but he's looking to expand the opening hours so that the pub is open for lunch on Saturday and on Sunday and introduce the food here to a new generation of foodies.

Based on the dining room when we visited, it's very popular with Mayfair business folk (there was a group of Japanese businessmen beside us working their way through almost every steak on the menu) - I was one of only two women eating. Much of the staff have been here for years, so the atmosphere was that of a congenial private club.

So, there's a lot of steak then?

The grill and steak cabinet is what you see as you enter the dining room at the back of the pub. Here you can choose your cut of steak, tell the chef Mark Newbury how you want it cooked (or get advice on how you should have it cooked).

The menu is pretty much your standard steakhouse spec - so there's prawn or crayfish cocktails to start, a smattering of other mains and a selection of sides notable for their calorific content. Why have creamed spinach when you can have baked gruyere creamed spinach, right? We were intrigued by one starter - the pan roast veal with celeriac puree and sundried tomato and rosemary dressing (£11) which when it came was bigger than most main courses you'd have in any East London eaterie and actually really good.

But there's no getting around it - steaks are the reason you'd come here (unless you want to try the Guinea's award-winning pies of course). And they are VERY good. We went for a sirloin and a rib-eye, both of which were right up there in terms of Great Steaks We've Eaten in London. You're going to want to order the potato gratin and the aforementioned spinach too.

Desserts probably aren't their strong suit - but if you make it this far you should try the pecan sticky toffee pudding (£6.10).

There are several bottles on the list at around the £35 mark, but it climbs pretty steeply from there, reflecting the neighbourhood. Anyone coming here to celebrate a successful deal could always opt for the Château Mouton Rothschild 1er Grand Cru Classé at £750.

If you like your steak and haven't tried the Guinea Grill yet, you need to rectify that, pronto. You'll be very well looked after here - we're seriously thinking of setting up office in the dining room.

The Guinea Grill is at 30 Bruton Place, London W1J 6NL. Keep up with their news on Twitter @GuineaGrill

Hot Dinners were invited to The Guinea Grill. Prices were correct at the time of writing.