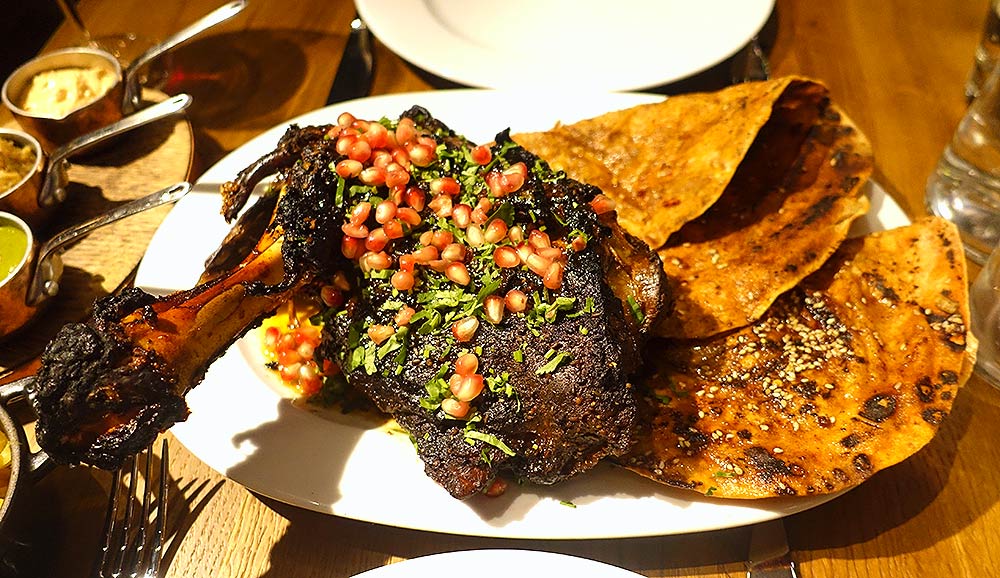 The quite incredible slow-smoked goat leg

What can you tell us about The Coal Shed?

It's from the same people as a pair of Brighton restaurants - The Salt Room and the original Coal Shed. The two have had praise showered upon them, not least by us but also Jay Rayner, who called The Salt Room "a very good thing indeed". So hopes are pretty high for their first London restaurant.

In a slightly peculiar spot - at least for the moment. It's part of the One Tower Bridge development of apartments, restaurants and a big theatre too. The development is still coming along with a good few places to open (and could really do with some form of signposting). So if you're looking for The Coal Shed, it's right in the centre of this complex in a small courtyard.

So you don't get to see the Thames, but the restaurant itself has a wonderful look. The kitchen is set slightly back from the main downstairs room, but with a huge open pass that can be seen throughout the ground floor. It opens up the kitchen without everything being too close. 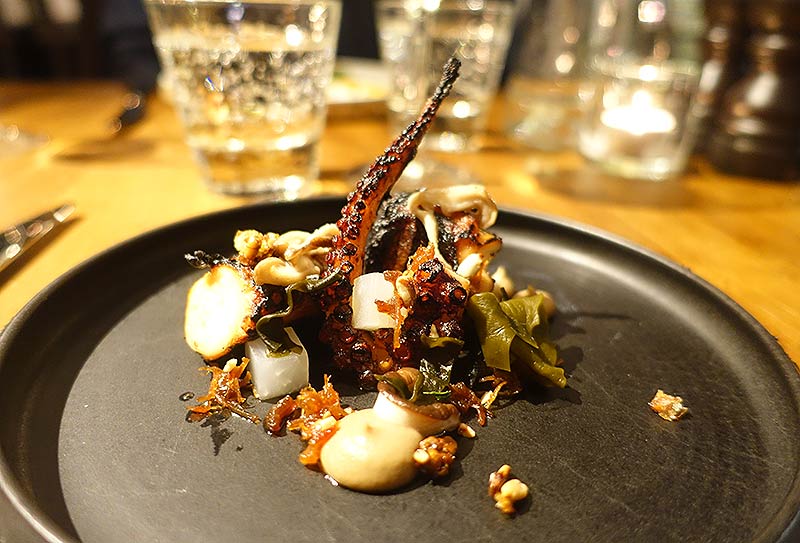 BBQ octopus with aubergine and kombu

There are two floors - with the upstairs element having a partition that can be converted into a private dining room. And while that's a perfectly good room, downstairs is where you'll want to be, where the kitchen adds that little extra dose of atmosphere.

And where should we meet for a drink first?

There is a small bar in The Coal Shed itself, so you can always perch there with a cocktail - but there are other options nearby. Head to the nearby Draft House for a beer or to the Ivy Tower Bridge which also has a long bar (that's where we started).

Every so often we encounter a menu where we think "well, I just want everything on this" and that's the case with The Coal Shed. There's an awful lot that starts to catch the eye as soon you cast your eye over the menu. 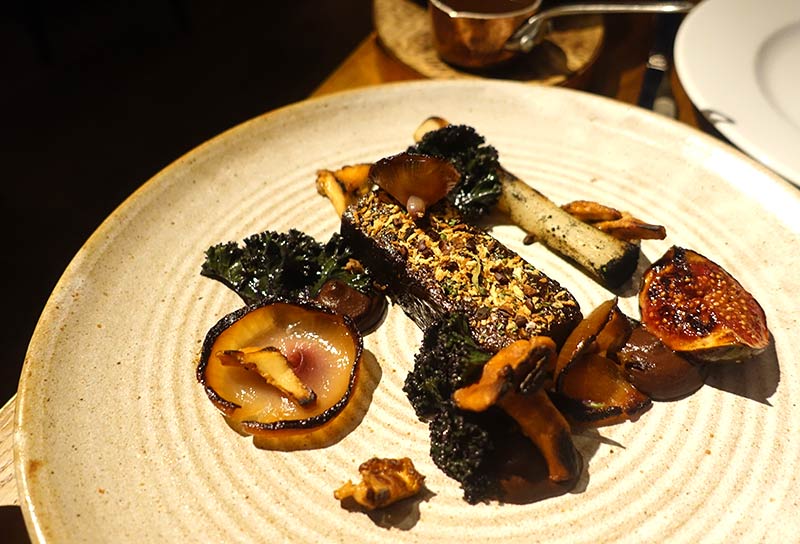 But narrowing it down a little..?

While we couldn't eat absolutely everything - what we did eat we can heartily recommend, starting with the sourdough and whipped beef fat. It's an obvious thing to grab while you scan the menu and just watch as that fat melts away on the plate, like ice cream. We desperately want some more while writing this...

And don't miss out on the beef tendons from the snacks menu. We were initially suspicious of these (we haven't had a good track record with beef tendon) but they're essentially a form of beef crackling spotted with kimchi ketchup. So yes, you'll be wanting them.

The rest of the menu is split into starters, meat, fish and fire (steaks and fish fresh from the coast) as well as the more traditional mains. The Salt Room is well known for its seafood menu so we think you could clearly do very well with the seafood here too but, other than the starters, we went straight for the meat. You can go for the steak but particular recommendations are: 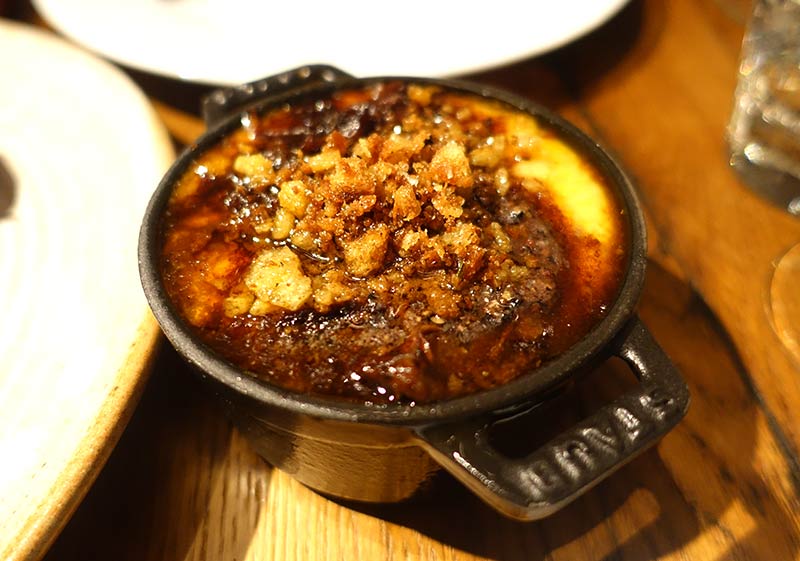 Mash with burnt ends and marrow. SO GOOD.

And anything else on the side?

The Coal Shed seems blessed with an array of side dishes that once again are very hard to choose from. There's the creamed spinach with three cheese and garlic - we didn't have that but blimey it sounds great. What we did have was the mash with burnt ends and marrow. Buttery mash swimming in marrow covered with burnt ends from their very popular smoked short ribs. Twas utterly fantastic.

And a quick shout-out to the onion rings, which were pickled before deep frying and served with a hot cheese foam dish. Again - you'll see that on the menu and have to order it. 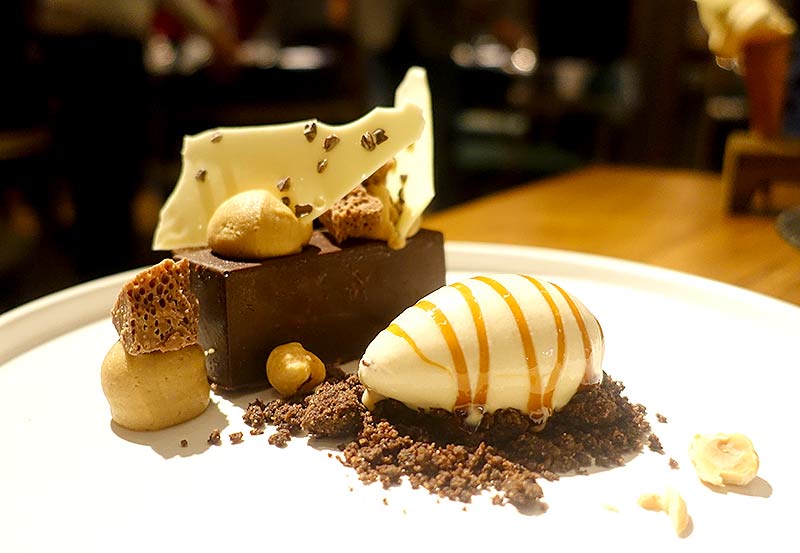 Leave room for these. They're from Executive Pastry Chef Laura Petersen who's come up to London to join The Coal Shed from Brighton. Her desserts were highly feted in Brighton so we were warned in advance to leave as much room as we could - a warning we definitely pass onto you now. The desserts we had were some of the best we've had in London in quite some time.

The "chocolate bar" is the one to head straight for on the main dessert list - a chocolate covered praline mousse paired with her own version of an aero, and which comes with condensed milk ice cream. Chocolate dishes can be hard to balance sometimes, but this was perfect.

And then there's the "Sweets" section. Mini desserts that you'll also want to hold back some space for, all which come in pairs. Particularly the mini salted caramel 99s and the chocolate coal. The latter an incredibly dense chocolate truffle which, yes, looks exactly like a piece of coal.

We opted for a couple of carafes - with prices starting at £23 a bottle, £16.50 a carafe. Although if you do fancy something on the pricier side, feel free to head for the 2009 Chateau Palmer at £450 a bottle.

We were ever so slightly wary about The Coal Shed. Could it replicate the success of the Brighton original when placed here in the Big Smoke? The answer is an unequivocal yes. From that whipped beef fat right through to the chocolate coals, the food was outstanding. So if you liked the original, or have been meaning to go there, you'll be very happy indeed with this London outpost.

Hot Dinners were invited to The Coal Shed. prices are correct at the time of writing.