[SIGPLUS_EXCEPTION_SOURCE] Image source is expected to be a full URL or a path relative to the image base folder specified in the back-end but /blog/2013/story/gallery is neither a URL nor a relative path to an existing file or folder.
0
Shares

The next chapter - we Test Drive Tom Seller's Story in Bermondsey 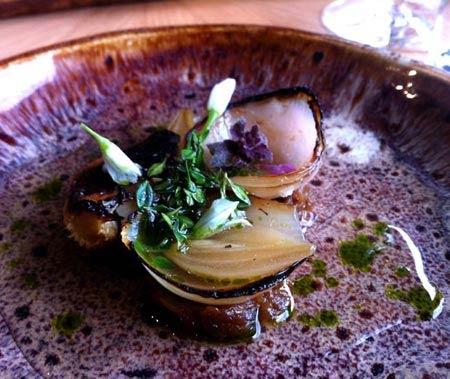 What can you tell us about Story?

It's the much anticipated opening from Tom Sellers, the culinary wunderkind who learned his craft under such luminaries as Thomas Keller and Rene Redzepi. Now, with the backing of Adam Byatt, he's opened his first restaurant here in London.

"The food at Story will be be British, ingredient-led and steeped in history. Simplistic in idea, yet technical in execution, with a bit of youthful fun thrown into the mix," is what he told us last year. We went along to see if it lived up to that promise.

Much has been made that this restaurant is in a former public convenience - but to be perfectly clear, that building was levelled and a new clean architectural block built specifically for this restaurant. So it straddles the junction as Tooley Street branches off to Queen Elizabeth Street just before it hits Tower Bridge Road. The building is quite beautiful and has already had interest from foreign architectural digests.

There are plenty of large round tables suitable for groups - and there were plenty of business lunches going on when we visited - but our favourite tables were the ones beside the window, looking out on to Tooley Street with a great view of the Shard.

Story does have a bar area serving up some interesting cocktails. Alternatively you could meet up at the Draft House just a few minutes away on Tower Bridge Road or maybe the Hide Bar on Bermondsey Street which has had a recent makeover and which Diffords Guide describes as having a "superb drinks offering".

There are three tasting menus on offer - a six course (£45), a nine course (£65) and (lunchtimes only) a three course menu you assemble yourself from the dishes on offer for £35. We went for lunch, so chose the six course lunch which we happily managed to get through over two hours without feeling like it was too rushed. From what we're seeing on other reports so far, those dishes are going to be on for a while, although they've all been worked on since the first service apparently.

Bread and dripping may be one dish you've already heard of or seen pictures of - it's a candle made from beef dripping served up with sourdough bread for you to dip into the melted 'wax' - delicious and witty. All the dishes were quite beautifully presented (as you can see from our half-decent pictures this time) but the standouts for us were the appetisers of rabbit 'sandwiches' - little loafs of rabbit meat, topped with carrots pickled in bergamot and the nasturtium flowers stuffed with oyster cream and and toasted rye bread crumb.

We also loved the dessert of three bears porridge - served up in three bowls, salty, sweet and 'just right'. All were devoured by this Goldilocks (not accurate description BTW) although the childlike spoons you're given to eat it with, are pretty hard to use and more of a triumph of style over substance.

The sommelier, who was previously at Tom Aikens, may have issued a slightly too rapid delivery of the wines for us to have grasped much, but we really enjoyed the list. Fizzes include two English greats by the glass from Hush Heath and Gusborne which kicked the lunch off well and we particularly liked our Burgundy, a Macon-Loché from Domaine Clos des Rocs.

Overall: If you're one of those for whom the phrase tasting menus brings you out in hives, Story may be the place to convert you. Here dishes are brought at a regular rate and with blessedly brief descriptions. There's also a great emphasis in this summer version of the menu on salad, edible flowers and vegetables, so we rose from a six course lunch which included three further appetisers, appetite sated, but not too full. Unlike other culinary establishments, this one felt relaxed and a place for you to enjoy the food, rather than be awed by it. We reckon it lives up pretty perfectly to Tom's original promise.

Story is at 201 Tooley Street, London SE1 2UE - Find out more about Story

Prices were correct at time of writing. Hot Dinners were invited to eat at Story.