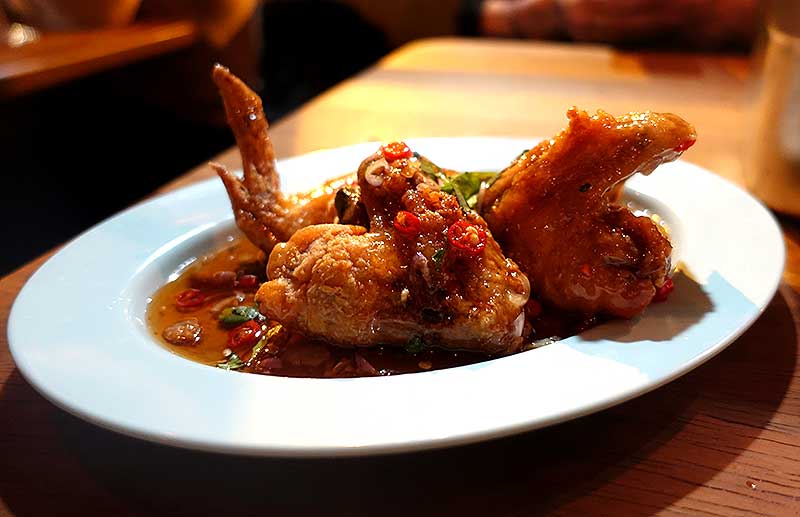 What can you tell us about Smoking Goat Shoreditch?

This is London's second Smoking Goat after the original, set up by Ben Chapmen, became a success on Denmark Street. It was really one of the first restaurants to in town to make a big deal about the smoking process - so much so that we had to remember that a trip there would mean smelling of the place for weeks afterwards. In a good way, you understand.

Like the original - and like its follow up Kiln - Smoking Goat in Shoreditch mixes smoking and barbecuing techniques with Thai cooking - offering something pretty unique. As the menu says, it's inspired by the late-night drinking and dining dens of Bangkok - so it's some way from your traditional Thai restaurant.

It's part of the huge Tea Building that's just opposite Shoreditch High Street overground - and which is also home to Lyle's and Pizza East. We were wondering why we hadn't noticed this big space before and then were told that there was a strip club here before. Oh. 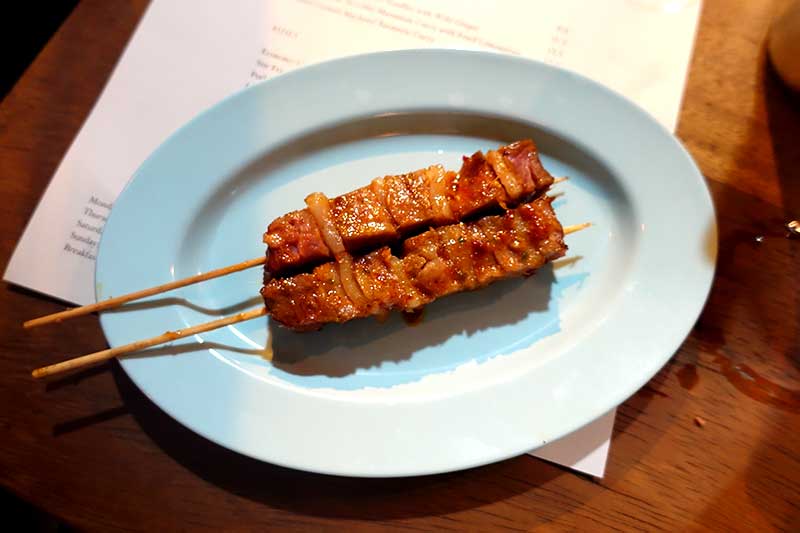 And it's bigger than the original?

Absolutely - MUCH bigger. Now the original was a little on the small side, tucked away in Denmark Street but this looks like it hosts easily twice as many people. It's more about traditional seating over counter dining this time around (though there are a couple of counter spots dotted about).

If you can, come as a group of four - we think that'll give you plenty of space for sharing dishes in the middle (we were engaged in something of a balancing act by the end). 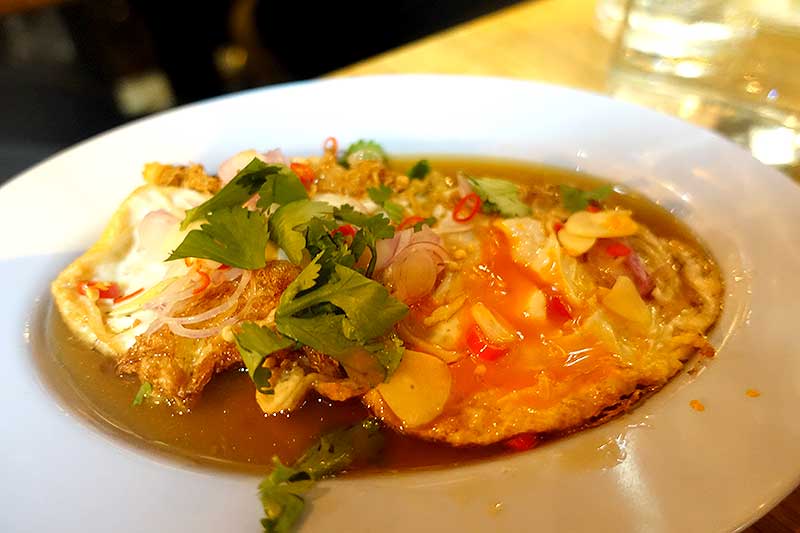 It's been quite some time since we were last in Smoking Goat, so we needed something of a refresher course. And that started with the Drinking Foods section of the menu. Essentially the small plates bit - these are lots of snacks that you can share amongst yourselves. We would suggest ordering from this bit of the menu first - and then following up with a second order of mains. The tables can get quite crowded, so this might be the best way to order.

The must-have dish at this point are the Chilli Fish Sauce Wings (£7) aka some of the best wings in the whole of London. We remember obsessing over these at the first Smoking Goat and they're still as good as we remember. A tip - hold onto the sauce when you're done with the wings and dip the Thai Style Brisket Sausage (£5.50) in there. Yes we know you're not supposed to do that - but it works very well.

Otherwise, the Barbecue Tamworth Skewers (£1.60 each) are perfect to nibble on while you're looking at the rest of the menu. And while we didn't order them (honestly, we intended to but er... forgot), the Jungle Style Chicken Livers (£6.50) come highly recommended. 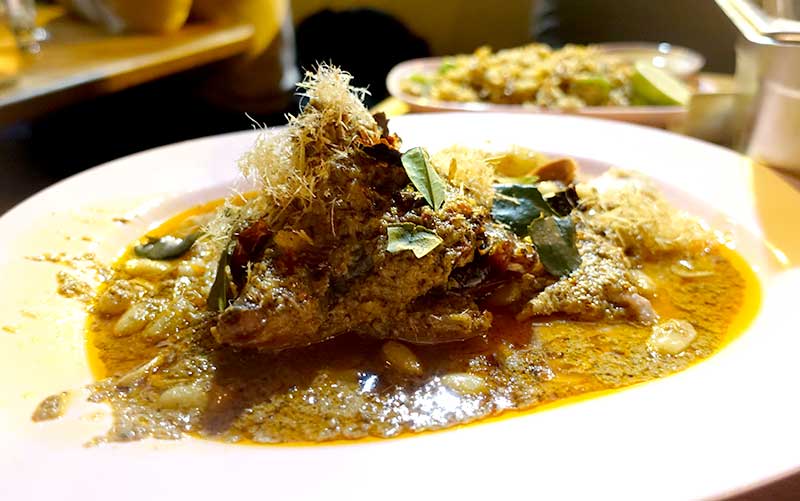 As mentioned - got some of the small plates out of the way before the mains arrive. If there are two of you - we reckon you should order just one of the main dishes at a time, backed up with one or two sides. We had the D'tom Yam Velvet Crab and Wild Mussels recommended (£9) but we were slightly afeared that it was too spicy for our palates - so chickened out. Sorry about that - but you can see it in its glory here.

What we did go for was the Barbecue Goat Shoulder Massaman Curry with Fried Lemongrass - one more example of the growing number of great goat dishes on London menus. But wonderful as that was (and it really was) it was the Half Soya Braised Chicken (£11.50) that really won us over. That's on the less spicy end of the spectrum, but that doesn't make it any less interesting. Indeed it was one of the best-cooked chickens we've encountered.

Match all of that with some Lardo Fried Rice (£3.80) because of course you're going to order that.

Alas no - but if you're craving something sweet, why not do what we did and walk five minutes down the road to Blanchette, and get a quick dessert at the counter. 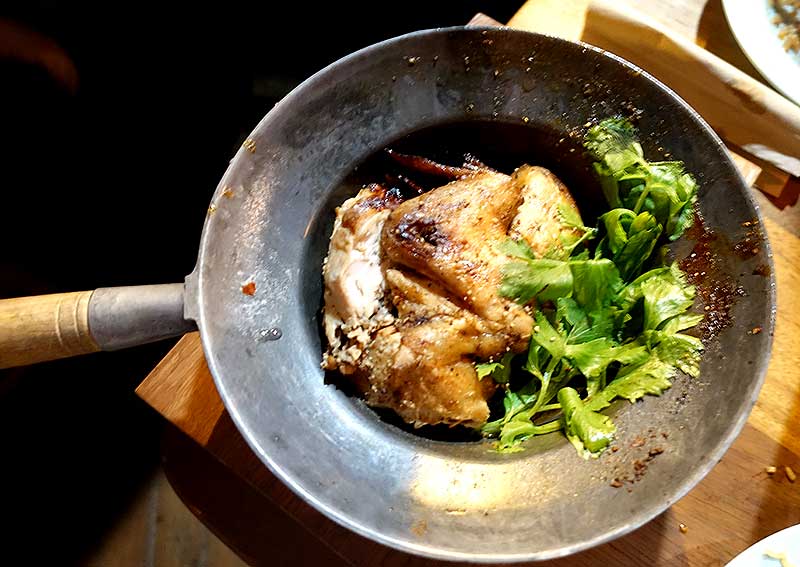 In general - if you liked either the original Smoking Goat or Kiln, you'll find much to enjoy here too. Some of the greatest hits along with some mighty fine new sharing dishes make this a hit - and it was heaving on the mid-week night we visited. Plus you can actually just pop in for a drink and prop up the counter opposite the kitchen. True, that'll only serve to make you very hungry indeed - but then that's just another good excuse to make your way through more of the menu...

Hot Dinners were invited to Smoking Goat. Prices are correct at the time of writing.

Where is it? 64 Shoreditch High Street London E1 6JJ

How to book: Via their website and some tables are held back for walk-ins.