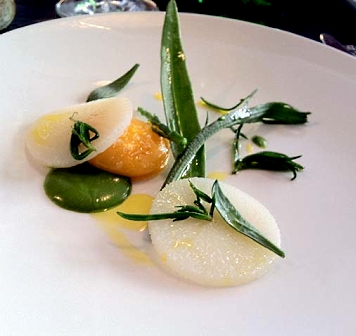 Simon Rogan is best known for his Cumbrian restaurant L'enclume, a Michelin-starred restaurant which has carved out a serious reputation for serving challenging food from locally sourced ingredients. It's a restaurant praised highly by foodies and one which most recently made an appearance on Coogan and Brydon's The Trip.

Roganic is Rogan’s new London restaurant, run by head chef Ben Spalding and serving dishes created by both the head chef and Rogan.  Think of it as a similar set-up to Dinner by Heston Blumenthal - which has Ashley Palmer Watts in charge and a similarly strong hand on the menu. Although this is quite a bit smaller.

Roganic seats only 35 people, so expect an intimate affair.

It's on Blandford Street street in Marylebone, next to Trishna and L'Autre Pied.

Given the reputation of Rogan and the food on offer, this is definitely one for committed foodies.  With only a set tasting menu available, it's all about the food rather than the scene and rightly so.

Where should I meet my fellow diners for a pre-dinner drink?

There's no bar here - so two good places to meet up for a quick drink are cocktail bar Purl (also on Blandford Street) or Vinoteca on Seymour Place.

What should I expect when I walk in the front door?

The restaurant is split into two, with most of the seats in the front area, and a few in a back room which is lit with a prominent skylight.  And although it’s small, the dining room is beautifully designed with sliding windows on to the street bringing plenty of light into the restrained dining room. Be warned, if you pop to the men’s loo you’ll get a great, if unexpected, glimpse of the kitchen in action.

We'd recommend getting a seat in the front part of the restaurant if you can. The best table, we think, is the one by the window looking out on the street.

Roganic only offers a tasting menu - and there are two variations.  At lunch, you can go for the full-on ten course menu (plus a few extras), as well as a reduced five course option  while the ten course is the only option in the evening. We went for the ten course lunch, but normally we'd probably recommend the five course option if dining during the day. You won’t miss out too badly as it still features some of our favourite dishes.

From our meal, a few courses really stood out.  The vintage potatoes with onion ash was incredible. Apparently it’s made by roasting the onions until black in the skin, then dehydrating them for 36 hours. It’s also a dish you’ll also find on the menu up in Cumbria.

Other highlights were the seawater-cured Kentish mackerel and the roasted brill rolled in chicken salt. A special mention goes to the Cumbrian hoggett, artichokes and chenopodium (a flowering herb apparently). The hoggett (from a sheep over a year old) was slow cooked to perfection and served with an entirely redundant steak knife when a spoon would have done.

On top of all of this, there are a number of extras offered throughout the meal, with our particular favourite coming right at the end.  This was a cherry soda served with a marshmallow covered in strawberry dust.  Fascinated by this, we asked for more info about this dish and got this direct from the chef himself, Ben Spalding:

"The cherry soda was made from the beautiful in season cherries from the sous chef Andy's back garden in Wandsworth. They were pipped and then vacuum packed with mint, cinnamon, juniper, sugar and cooked for 1 hour at 63c.  Then the spices are removed, the cherries are juiced and strained up to 10 times to get the clear liquid. The stock is poured into a soda stream and charged twice with a C02 charger to create bubbles, and then it is squirted into a shotglass during service. As the seconds pass by and it gets taken to the table, starts to dissolve in the bottom and stays foamy on the top so you get just a little taste of the stock leaving you wanting more!

The marshmallow is made daily as a basic marshmallow recipe then cut into small pieces and kept in a container. The strawberry sherbet is made from slicing Kentish strawberries and drying out in a dehydrator for 48 hours. Then they are blended in a spice grinder to a powder,  mixed with citric acid, bicarbonate of soda and icing sugar to make sherbet. In service the marshmallow is sprayed lightly with water then rolled in sherbet."

We've a full gallery of everything we ate below, but you'll note we got a little over excited by the soda and just have an empty glass to show.  You'll just have to go and try it yourselves.

It certainly is - but beware, it’s so heavenly that if you fall upon the selection of potato & buttermilk, pumpernickel and spelt & wholemeal rolls, you’ll never make it to the final course..

But what elevates everything is the presentation of the butter.  A solitary stone rests on the table in front of each diner as you sit at your table. As bread is served you discover its purpose. It was found by chef Ben Spalding on his native Folkestone coastline, covered with Roganic's home made butter churned to soft perfection and rolled in Maldon salt (although Spalding is making his own salt to be used in the butter, using the seawater that cures the mackerel dish - now that’s attention to detail).

It's simply the best bread and butter we've ever had in a restaurant.

There's a fine selection of beer on offer too, and a wine matching option is being planned.

Go on then, how much will this set me back?

£40 for five courses, £80 for ten.  Keenly-priced for central London, we think, particularly when you factor in all the extra bits and pieces you’re brought throughout the meal.

Yes, the entire ten course menu is available as a vegetarian option.

Before it opened, we thought Roganic would be one of the hits of the summer and we're even more sure of that now.

A ten course tasting menu can be a daunting proposition, but we weren't over-full by the end of our three hour marathon lunch, partly due to the emphasis on vegetables rather than carbohydrates (sorry to go all nutritionist on you there). It's a fairly unique meal in London with a great focus on presenting fresh ingredients in new and challenging ways and one which you no longer have to travel hundreds of miles to Cumbria to experience.
Service is great and would put many of London’s top dining rooms to shame. So, given the size of the room and Rogan’s reputation, expect to find it pretty hard to get a table here once word gets out.

Prices are correct at time of writing. Hot Dinners was invited to eat at Roganic.