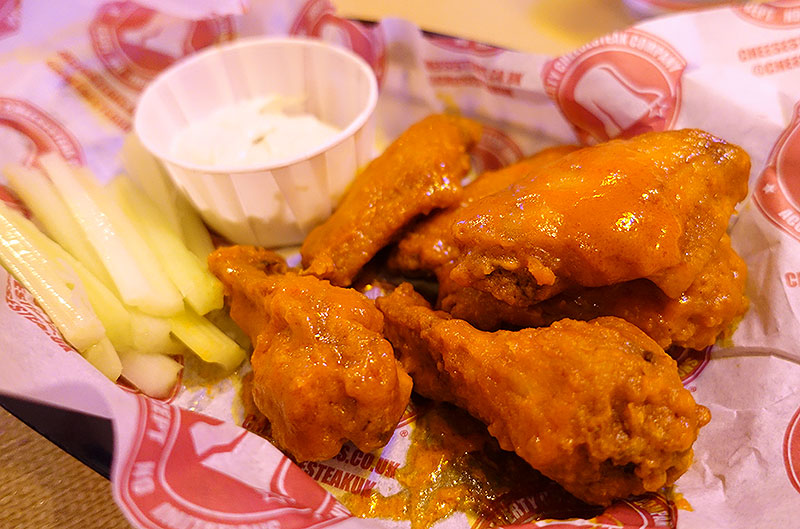 So what do we need to know about Passyunk Avenue?

You may know them better from their previous streetfood incarnation - the Liberty Cheesesteak Company. Having traded in Spitalfieds for the past few years, they've now turned themselves into a permanent restaurant. As owner JP Teti - a Philadelphia ex-pat explains - they want "to introduce London to the delicacy that is the Philly Cheesesteak in its most authentic form".

Where exactly are they?

In the growing foodie district of north Fitzrovia - so just down from Euston Road, on Cleveland Street. The nearest tube is Warren Street. 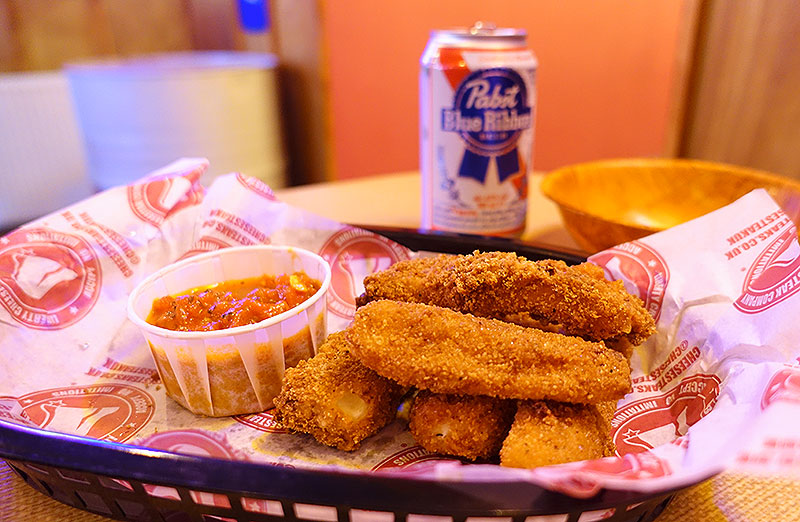 If you can get inside the doors, The Smugglers Tavern on Warren Street is supposed to be good. But it was heaving when we tried on a Friday evening, so we ended up having a lovely glass of Sicilian wine in Italian restaurant Seventeen 0 Seven which turns out to be a lovely wine bar in the evenings.

Where's the best place to sit

If there's a big game on, then wherever you're lucky enough to get a seat. The restaurant's across two floors, and both are covered with US memorabilia. It turns out that Bubba - of the now-closed Arkansas Cafe in Spitalfields - is a big fan of the boys here and he sold them a lot of the Americana that used to grace his restaurant. We managed to get one of the booths on the ground floor which turned out to be a buzzy little spot. 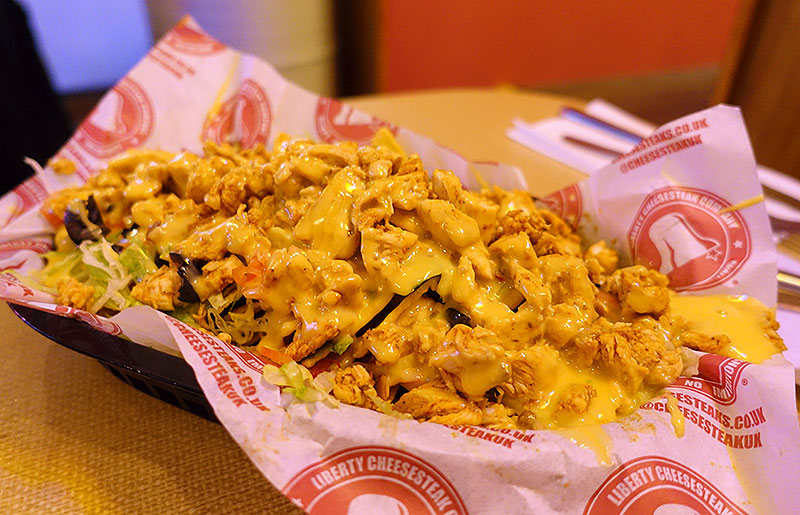 So what's on the menu? Philly Cheesesteak presumably?

Well yes, but a lot more besides. One of the big changes that moving to a bricks and mortar spot has made, is that they've been able to expand their menu. The starter section includes pretty much everything you'd want before moving on the main event, from wonderful blue cheese buffalo wings (£8) and mozzarella sticks served with a cracking marinara sauce (£5.50).

But whatever you do, you are going to want to order the nachos (£9.50), which may go down as among the best we've had in this country. Although you can have them with cheesesteak topping - we opted for chicken instead, all covered with their own Wiz cheese sauce which, unfortunate though the name might be for the British, turns out to be just what you want all over your nachos (and your fries too).

And the main event?

As for the mains, there's a whole section devoted to variations on the cheesesteak.

They range in price from £9 for the veggie version (garlic mushrooms, tenderstem broccoli and a choice of cheese) to the bacon-enhanced cheesesteak and the Reading Terminal version (ribeye, provolone and garlic sauteed tenderstem broccoli with homemade pesto). All come on Passyunk's custom recipe Italian loaf - which has just the right degree of softness and structure to keep the whole thing from collapsing.

We decided to go for the basic ribeye cheesesteak to really put the place to the test. We've had a few cheesesteaks in this country, but none of them have come close to topping this, we think.

If you fancy something different, we also tried the South Philly Style Chicken Parmigiano (£12) with incredibly tender breaded chicken and that super marinara sauce again - and the roast pork sandwich (£12). But there are also hoagies, salads and meatballs subs to opt for as well. 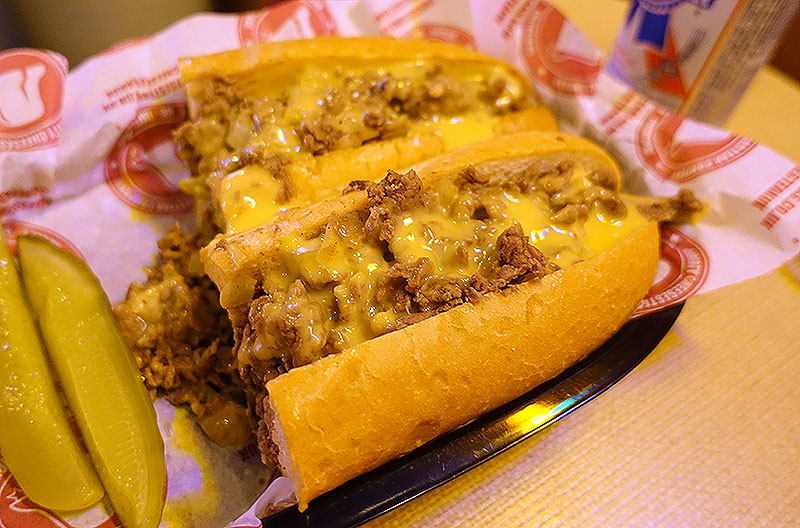 The main event - the beef cheesesteak

There is a choice of wine - denoted only by its colour, but really what you want here is the beer. On draft, they have Sambrooks, Bud, Sam Adams and Sierra Nevada. Or you could try - as we did - a Citywide Special which is a classic Philly combo of a can of Pabst Blue Ribbon and an accompanying shot of bourbon. If you want to stick to softs, then there's root beer and cream soda in addition to the usual options.

Are you crazy? After all that? (None available, we're afraid)

Watching the staff here chatting happily with the customers (mainly expats and tourists - we seemed to be the only Brits in the house) - we felt Passyunk was maybe the closest London has to the style of American bar popularised in Cheers. They've only been open a few weeks, but give them a few months and this slice of Philly in London may just be the place where everyone knows your name. 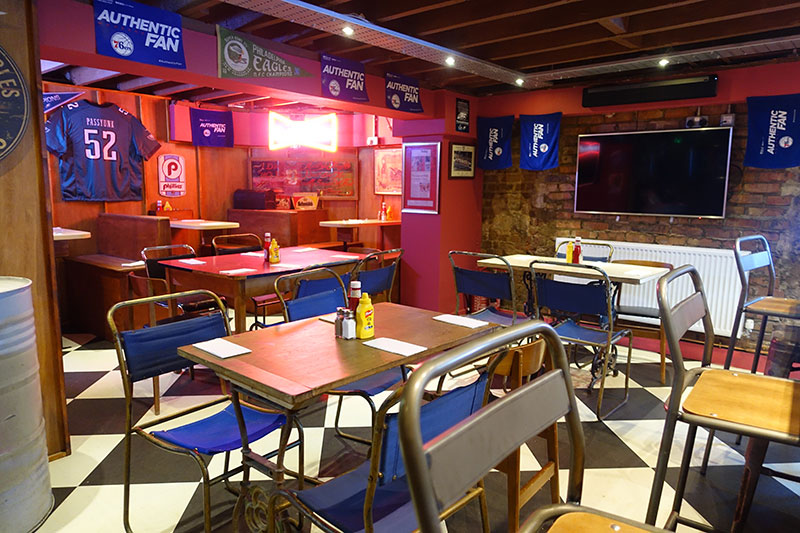 Where is it? 80 Cleveland Street, London, United Kingdom