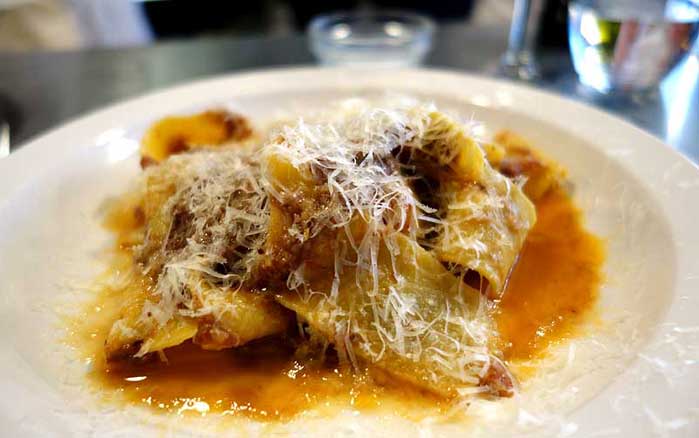 So, what do we need to know about Padella?

It's the short order menu, pasta spot that's just opened, with the folks from popular Islington restaurant Trullo behind it.

Not in Borough Market as we'd originally thought, but just outside it on Southwark Street. Come out of the Borough High Street West exit at London Bridge station and you're pretty much outside it.

The Hop Exchange is probably the nearest pub, while the lovely George Inn isn't far away. If you're after cocktails, newish whiskey bar Whiskey Ginger is right around the corner in Green Dragon Court.

Practically everyone - it's a great spot to pop in for a quick working lunch for starters. If you're visiting the market but don't fancy eating standing up, you can grab a counter seat here. Kids will love it, tourists wil love it and, from what we've seen on Twitter and Instagram so far, London's foodies love it too.

If you're after a view of the action, try and get a seat at the counter overlooking the kitchen. The seats looking over over Southwark Street would also be pretty sought after. And there's another room downstairs with more space. The restaurant doesn't take bookings, it's walk-ins only and bound to be busy - so really grab what seat you can.

So the food is pasta, right?

Yes, but not only pasta. There's 6 antipasti, 6 pasta dishes and two dessert choices. From a short list of starters we tried the burrata (£4.50) and a superb plate of Dexter beef carpaccio (£7) - both served with olive oil.

But of course the main thing here IS the pasta. If you manage to secure a seat up by the pass, you can watch the dish being put together in a matter of minutes, from pot to plate. We went for the pappardelle with 8 hour Dexter beef shin ragu - the most expensive dish on the menu at £9.80 and the ricotta ravioli with sage butter for £8.20. Both were, if you'll excuse us, bloody brilliant.

Desserts were fighting a losing battle trying to compete with the first two courses, a rhubarb and almond tart was perfectly nice, but to be honest, we'd both have preferred another plate of the pasta.

The drinks list is as brief as the food menu with a short selection of Italian cocktails, a Prosecco, two reds and two white - it's not all Italian though - one of those whites is an English Bacchus from Kingscote Vinyards. Cocktails are either £5 or £6 and a 125ml glass of wine starts from as little as £3.

A concept so simple and blindingly brilliant you'll wonder why no-one has done it before. Just be glad that it's opened in London when you're queueing for a seat.

Padella is at 4 Southwark Street, London SE1 1TQ. Find out more about Padella.

Hot Dinners were invited to Padella. Prices were correct at the time of writing.