[SIGPLUS_EXCEPTION_SOURCE] Image source is expected to be a full URL or a path relative to the image base folder specified in the back-end but /blog/2014/firehouse/gallery is neither a URL nor a relative path to an existing file or folder.
0
Shares 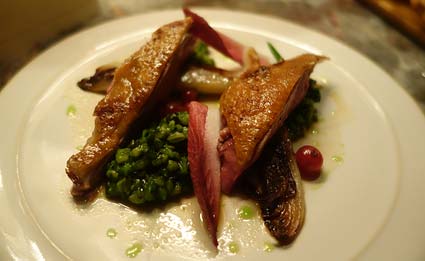 What can you tell us about Chiltern Firehouse?

The Chiltern Firehouse is the first London hotel and restaurant from US hotelier André Balazs. His hotels in the US are both trendy and popular, with Chateau Marmot and his Standard hotel group being particular celebrity hangouts. In fact this is his first hotel outside of the US and judging by the early reception, looks to be as big a hit as its US counterparts.

And who's in the Kitchen?

In charge of the food at Chiltern Firehouse is Nuno Mendes, coming off a very successful and highly rated stint at east London's Viajante. While the food at Viajante was more precise (there were certainly tweezers in evidence there) Mendes at Firehouse offers a more contemporary American style approach - but with a definite Mendes touch as everything surprises - no matter how familiar it might seem at first glance on the menu.

He's joined in his endeavours by Head Chef Dale Osbourne, most recently sous chef at Dinner by Heston Blumenthal. Both sign the daily menu, which we thought was a pleasingly personal touch in a large restaurant such as this.

It's hidden away in the back streets of Marylebone, pretty much half way between Baker Street and Bond Street tubes.

Round the corner from the Firehouse is Purl, probably the best place to head if you want a pre or post-dinner cocktail. It's also about a 5 minute bus ride from Remedy Wine Bar.

As for the bar at the restaurant, it's a little on the small side, so you may not be guaranteed a space there before sitting down (although the cocktails were decent). However, this could well be because the main hotel bar was not yet open - as soon as that's available (and it's expected that dinner guests will be able to use it too) that will likely be the best place to relax with some pre/post dinner booze.

For us - there's no doubt at all that it's the counter in front of the kitchen. If you're here for the food rather than to see and be seen, this will be the only place you'll want to sit.  The counter seats 8, with a small glass partition separating you and the wonderful looking kitchen (something on which money has clearly been lavished). This separation makes you feel as close as you possibly can be to the kitchen - while still giving diners privacy. It's up there with the best counter dining experience we've had in London - maybe it is the best.

The rest of the dining room looks like the kind of eclectic experience you'll occasionally see in New York - with multiple areas throughout from banquettes to standalone tables - but rarely makes its way over to the UK. There's also a chef's table up in the corner by the kitchen which seat around 8 where they'll make up a special menu to take you through the kitchen's highlights.

Like many a hotel restaurant before it, Firehouse has to cater for the guests with familiar food, but manages to take everything one step further to the best possible combination of the familiar and the new - something we should have expected from Mendes. The menu reads wonderfully (check out the gallery for a scan of it).

The menu will evolve and change over time and while every dish we had was startlingly good, the standout items we had were:

You can see all of these and more in the gallery below - and we've also heard great things about the short rib with bone marrow (which looked excellent as they blow-torched the marrow in front of us).

The initial bar menu is pleasingly small (we're not fans of lists the size of a Dickens novel on cocktails - it takes us forever to make up our minds). Cocktails are all around the £10 mark (pretty good for a high-end hotel) with both the Cinq a Sept (vodka, vermouth and a tokaji reduction) and the Ravello Breeze (gin, lillet, safforn syrup, citrus) strong and well made.

Wine-wise, glasses start at the £6 mark (moving up to £17 also by the glass) while bottles start at £22 with half a dozen or so under £30 before hurtling off into the stratosphere. The sommelier picked for us a bottle of Breggo American chardonnay for us from Mendocino (£60) which was so good, we've had to track it down from a UK merchant and order some more.

The Firehouse is the front runner to beat in our meal of the year so far. Food and service were both excellent and it's great to see another side of Nuno Mendes's cooking and one that matches the high-end hotel experience so well. It's a definite must-visit with one of the buzziest dining rooms we've been in for a while. We're already planning to go back to try the brunch. From what we hear, it's already hard to get a table. Better try and get a booking as soon as you can.

Prices were correct at time of writing. Hot Dinners ate as guests of Chiltern Firehouse.