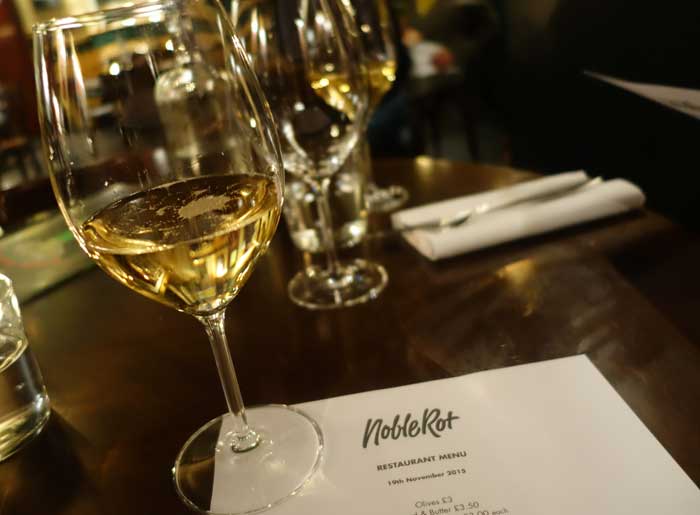 So what do we need to know about Noble Rot?

Only that it's been one of the most-anticipated openings in London this season. It's all down to the team - a sort of polygamous marriage made in heaven between Mark Andrew and Daniel Keeling of Noble Rot wine magazine and head chef Paul Weaver (formerly of St John Bread & Wine and The Sportsman) and, as Executive Chef, The Sportsman's Stephen Harris.

They've taken over what was Vats wine bar on Lamb's Conduit Street, about half way down, opposite Cigala. As far as tube stations go, you're marginally closer to Russell Street we reckon, than Holborn. Happily they haven't messed around with the room too much, letting its 30 year history as a wine bar and general ambience (the building dates back to 1700) stay much the same as before, with just a gentle wash and brush up.

Difficult one, this. At the front of the restaurant on the left is a great table in a window alcove, then there's the counter for solo dining. Where we were in the main room of the restaruant at the back felt particularly good for larger groups.

The menu is pretty small and has already changed a few times since they opened a week or so ago. We tried a lot of the small sharing dishes or starters adn that's followed by around four larger mains, a couple of desserts and a cheese plate to choose from. Anyone who's been to The Sportsman is going to want to try the slipsole which here comes with smoked butter (£9) and it's absolutely not to be missed, a highlight of the meal. Of the rest of the dishes we tried, standouts were:

It is, as you'd expect, a great wine list. But there's plenty here to tempt in folk who might not know their way around some of the more unusual wines here. An extensive selection by the glass features a 75ml measure if you just want to try a tiny tipple with a dish and the more usual 125ml selection ranges from £3 for a glass of Rioja up to £23 for a glass of Puligny-Montrachet. We particularly liked the 'Champagne taste on a lemonade budget' section of the main wine list. Our advice - let them choose and introduce you to something new and amazing.

With a regularly changing menu, well priced dishes and a lovely been-here-for-ages feel to the place, Noble Rot could become a new haunt of ours. We could just as easily see ourselves perched up at the bar with a glass and a small dish or two for a quick lunch as we could spending an evening here working our way through the wine list. This one's a keeper.

Prices were correct at the time of writing. Hot Dinners ate as guests of Noble Rot.