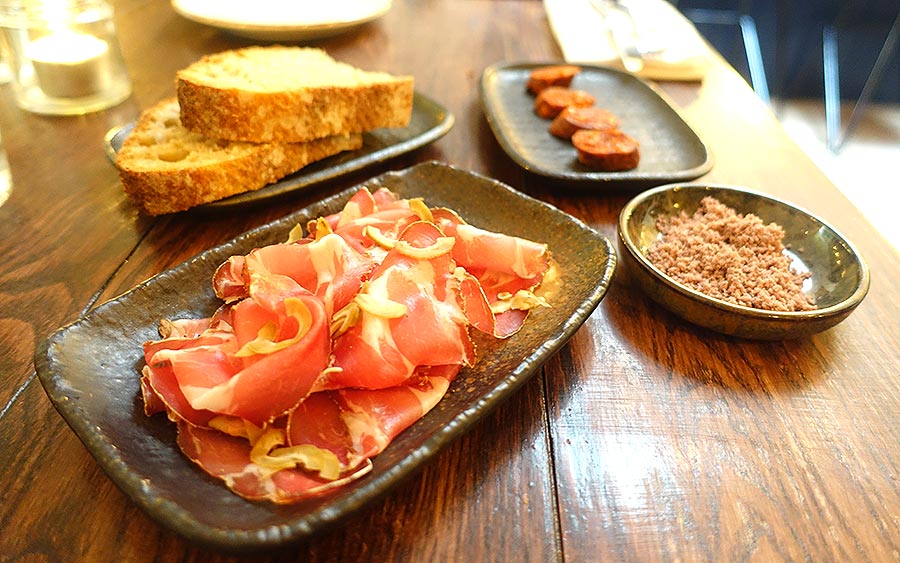 ALL the charcuterie! Venison chorizo, cured pork and the bread and seaweed butter

What can you tell us about Neo Bistro?

It's a joint venture between Anglo's Mark Jarvis and ex Harwood Arms chef Alex Harper. In a very central West End location, it's a very different beast to pretty much anything in the surrounding area.

So what's so different about it?

It's a very seasonal idea for starters, with the key draw being the ever-evolving small tasting menu in a casual setting. It's the kind of restaurant that you're much more likely to see in the eastern/Shoreditch area of the city, so to have this just a few seconds away from the main shopping mecca of Oxford Street is quite a departure. 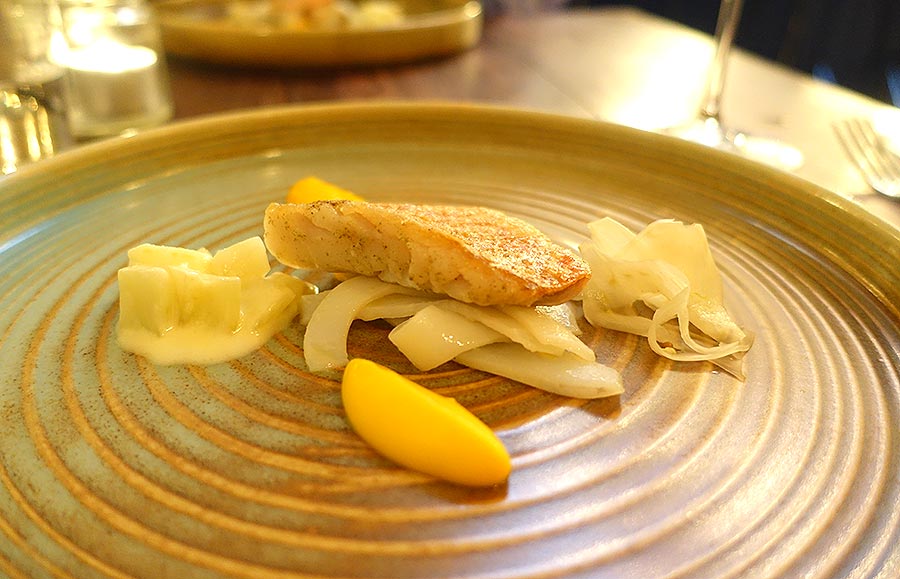 Neo Bistro has taken up the space last occupied by the Woodstock Arms - and at the moment, that's the best way to identify it from the signeage outside. The former life as a pub also helps to give the whole endeavour a nicely laid-back feel

As for location - it's literally just off Oxford Street and a couple of minutes walk from Bond Street station.

Who's it best suited for?

Anyone who's been craving the kind of new-wave dining that we see out east but is next to impossible to find in this area of town. 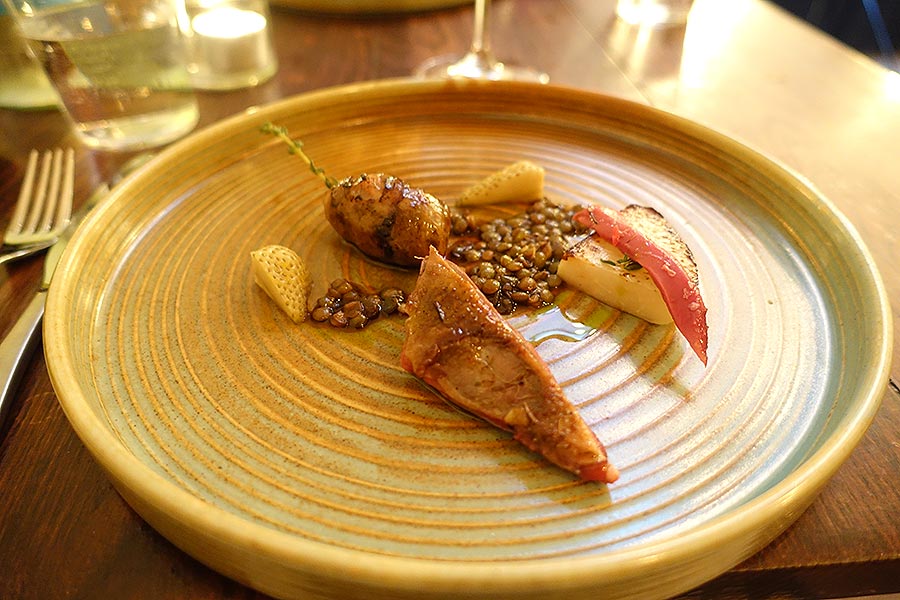 If you're just after a quick beer, then the Spread Eagle is a couple of steps across the street. But in the surrounding area, our favourite spots are the Chase-owned Running Horse on Davies Street or if you're really pushing the boat out, the Claridge's bar is very near too...

And there's also a small bar at Neo Bistro itself. There are only a few stools but it's a really good bet if you're in the area, which hasn't been blessed with many new drinking establishments in recent years. 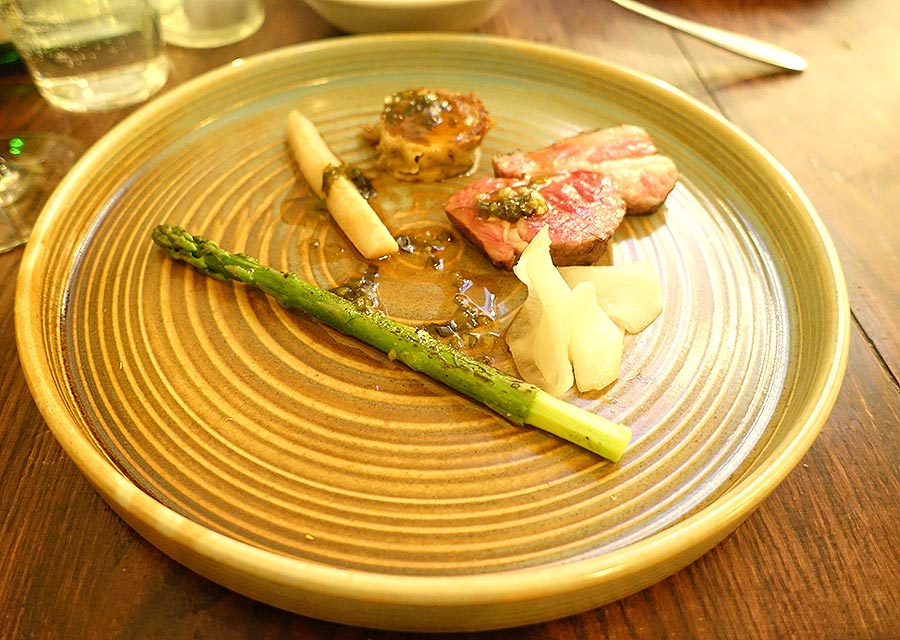 And - most importantly - what should we eat?

There's a tasting menu and a la carte options - but we think the tasting menu is definitely the one to go for if you have a couple of hours. It's £42 for six courses (with a couple more, including cheese, available as supplements). And that's pretty damned good value in this area.

And one of those courses is the collection of charcuterie and their Kumut sourdough bread and seaweed butter - so that makes it even more of a must. Plus, we have a special shout-out here to their very fine venison chorizo (£4 outside of the tasting menu).

As mentioned - it's the type of pared-back cooking that you'll have seen in places like Lyles, The Clove Club and Anglo before it, all using the best seasonal ingredients. Because of the ever-changing aspect, things might well have shifted a little by the time you eat there - but during our dinner, the dishes that particularly struck us were:

We also had to add a couple of things that weren't on the tasting menu. Firstly the hay-baked potatoes with mushroom butter (£4.50) because how COULD you turn that down? Yes, it lived up to expectations. So if you do go for the tasting menu, you can still add dishes from the a la carte.

And secondly, we changed one of the desserts to the "strawberries and cream". The chocolate and malt was a fine dessert, but the much fresher tasting dish of strawberries, cream and pastry really won out here. We personally think that is a better fit for the tasting menu. 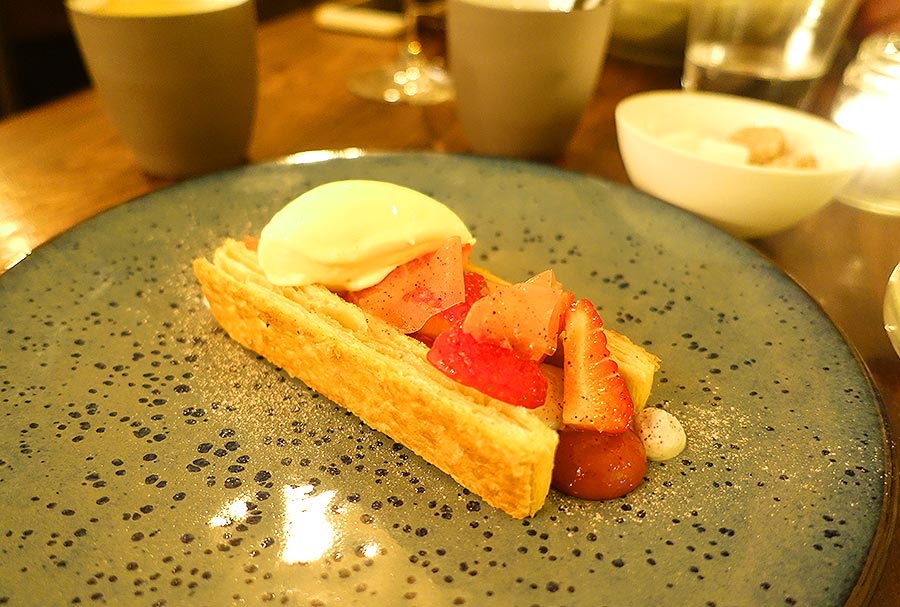 There's a short, well-made cocktail list to start things off, around the £8-9 mark, plenty of beer and sparkling wine as well as about 20 bottles on the main list (starting at £19.50 for the house). We opted for a Mantlerhof Gruner Veltliner at what we think is a reasonable £26.

Neo Bistro is - as the name suggests - trying something very different for this area of town. A pared back, seasonal menu with hints of the very best in British dining at the moment. We're always on the look out for restaurants that try to push the envelope at least a little, and Neo Bistro feels like a welcome breath of fresh air for Mayfair. Here's hoping it's the start of a trend.

Hot Dinners were invited to Neo Bistro. Prices are correct at the time of writing.