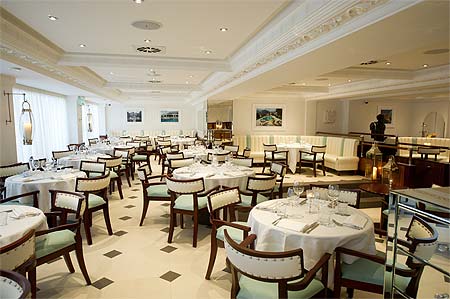 What can you tell us about Kitchen Joel Antunes?

In the 90’s one of the most popular dining destinations in London had to be Les Saveurs in Mayfair. Run by the impressively trained chef Joel Antunes, Les Saveurs couldn’t seem to get a bad review if it tried. After an extended trip to the US where he launched the highly acclaimed Joel in Atlanta, Antunes returned to the UK in 2010 to set up Brasserie Joel at Park Plaza Westminster Bridge.

Remaining as consultant to Brasserie Joel, Antunes has recently launched his latest venture, returning to his old manor in Mayfair. Kitchen Joel Antunes is a collaborative venture with hotelier, restaurateur and nightclub owner, Mark Fuller, at the Embassy Mayfair.

The 95-cover restaurant is decorated in 1920s Riviera style, with soft white and pastel colourings, tiled floors and comfortable leather booths at either end of the dining room. It also has a 40-cover terrace area, at the front of the restaurant, that’s sure to be a hit in the summer months.

Roughly a 10-minute walk from either Piccadilly Circus or Green Park underground stations, Kitchen Joel Antunes is located on Old Burlington Street in the heart of Mayfair, surrounded by tailors on Savile Row, landmark auctioneers and fine art galleries.

Kitchen Joel Antunes is going to appeal to a wide variety of clientele dependent upon which time of day, or night, you are there. In the short time that it’s been open it’s already apparently managed to attract a strong corporate clientele for lunch.

Early evening, when Hot Dinners visited, the diners were less formal. There were several young couples as well as some more mature groups enjoying a good catch up over their food. By the time we were leaving the restaurant was beginning to show signs of a metamorphosis. The members-only Embassy club is accessed through the restaurant, so an increasing number of young revellers had arrived to grab a bite to eat and some drinks before heading down to the club.

The incredibly charming restaurant manager, Eloise, informed us that on Thursday, Friday and Saturday nights they attract a generally young crowd as the bar is licensed until 3am and they have a resident DJ set-up later in the evening. This is good news for those who’d like to spend an evening having supper with friends before flowing seamlessly into party mode.

Where should I meet my fellow diners for pre-dinner drinks?

There’s a decent, well-stocked bar in Kitchen Joel Antunes where you’re very welcome to grab a drink before your sitting. For an aperitif, we selected a glass of the Chateau de Ricaud 2006, Loupiac, Bordeaux which was an exceptionally good glass of wine to warm up from a cold winter’s evening with. We also had a bowl of the warm, spiced nuts, which were a great accompaniment to the wine.

If you’re interested in a bit more privacy/seclusion for your meal then we’d recommend one of the soft-leather upholstered booths. However if you like to be able to see what’s going on around you whilst you dine then one of the tables along the front window is a great spot for being able to ‘keep an eye on things’.

First impressions are that it's a really good menu - which makes it harder to come to a decision on what you're going to have. We finally opted for the Butternut Squash Soup with Ricotta Gnocchi and Chorizo (£8) and the Fois Gras Terrine with Apple and Red Wine Jam (£14). The soup was silky, sumptuous and the slices of spicy chorizo really added a sensational kick. Be warned however that it is rather filling, so if you’re hoping to stretch to three courses you may prefer something lighter. The Fois Gras Terrine was also a hit, with its smooth, buttery blend. The resident sommelier is worthy of mention as he was incredibly knowledgeable about the wines on offer with a genuine enthusiasm and passion for his subject which is always encouraging. Putting ourselves in his very capable hands, on his recommendation we had a glass of Esprit de Serame 2010, Merlot, Languedoc to accompany our starters.

For mains we went for the Artisanal Pasta with Rabbit Ragout (£19), Oxtail Tortellini with Swiss Chard (£18) and a Side Salad of Rocket Leaves with Parmesan shavings. Both dishes were lighter than anticipated, but following the rich and hearty starters this was actually a good thing. Served in a small pan, the rabbit pasta was somewhat awkward to attack with a knife and fork, but was a very generous dish. To accompany the mains, the sommelier had recommended glasses of the Uvaggio 2007, Proprieta Sperimo, Piemonte.

Moving on to desserts we chose the Selection of three French Cheeses (£9) and the Vanilla Millefeuille with Salted Caramel (£9). The millefeuille was the star of the whole evening, the pastry was just perfect, melt in the mouth, the salted caramel sauce was incredibly moreish and could only have been improved had it been served in a giant jug as opposed to a measured amount on the plate. For dessert we were recommended a glass of the chilled Banyuls 2008, Roussillon, a bottle of which will, without doubt, be making its way into Hot Dinners' own wine rack soon it was so good.

The wine list is fairly extensive with around 140 to choose from. As mentioned before, the sommelier here is a fantastic asset to the restaurant, so we’d highly recommend you give yourself over to him when it comes to selecting your wines and we doubt you’ll be disappointed with his choices.

Yes, you can choose from traditional slim baguette slices or crusty white slices. The bread was brought back for a second time when the cheese board arrived for dessert.

With starters averaging at £11, mains at an average of £22 and desserts at £8, it’s not unreasonable, especially by Mayfair standards. There is plenty of choice however. You can choose from 13 starters for example, so it’s easy to keep the price down if you need to.

We're genuinely quite intrigued as to what the future holds for Kitchen Joel Antunes. As it’s such early days for the restaurant, it’s perhaps not quite found its groove as yet in terms of clientele. For example the early part of the evening it is very much the sort of place you would take visiting relatives for a nice, quiet meal. However, the emergence of the ‘late night crowd’ around 10:30pm makes you feel like you’d rather have your mates around you, settling in for a long night ahead. It will be interesting to see if they manage to keep everyone happy. One thing’s for sure, the thoroughly charming front of house team they’ve employed will do a good job of making anyone’s visit a pleasurable one.

Hot Dinners was invited to eat at Kitchen Joel Antunes. Prices are correct at time of writing.