Test Driving Jean-Georges at the Connaught 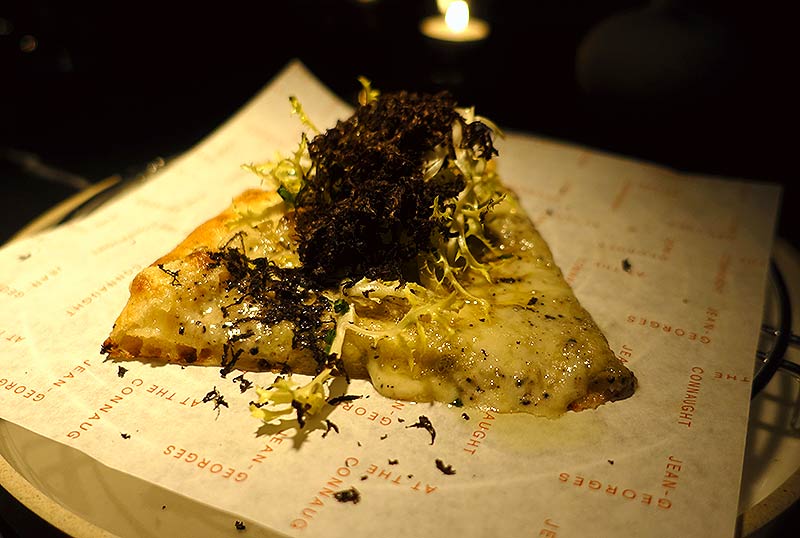 What can you tell us about Jean Georges at The Connaught?

It's taken over the big restaurant space at the front of the Connaught which used to hold Espelette. After months of renovation, the new restaurant has opened for action, with a top New York chef at the helm.

And what about that chef?

Jean-Georges Vongerichten is a very big name in The US, particularly in New York where his flagship Jean Georges restaurant holds three Michelin stars and his ABC kitchen has been getting glowing notices too.  He's teamed up with the Connaught to offer what he's calling a neighbourhood restaurant. But we should note at this point that the neighbourhood in question is Mayfair, so prepare your wallets accordingly. 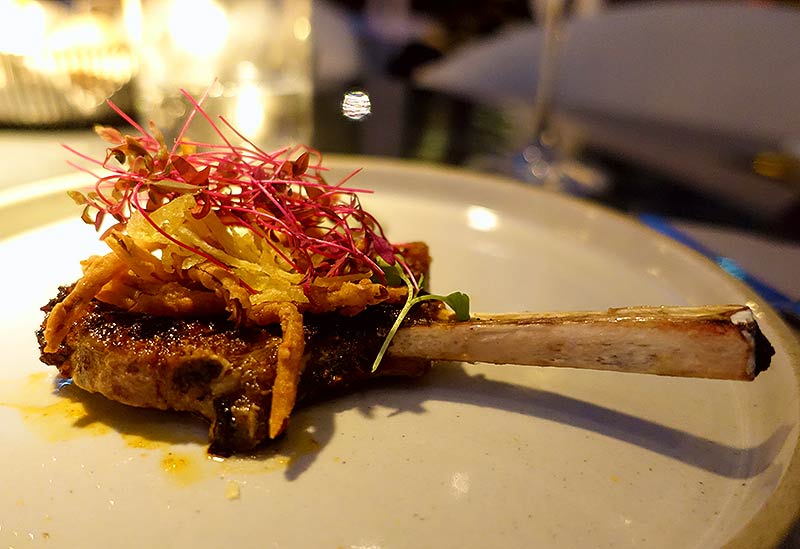 On the ground floor of the Connaught, which itself is pretty much right in the centre of Mayfair. It's one of London's top hotels and we were lucky enough to stay there too - here's our account of that.

And where should we go for a drink first?

If you're after one of the very best martinis in London then you should look no further than the Connaught Bar itself. Just call round the martini trolley and watch the master in action (although note that the trolley can get pretty busy at peak times).

Also in the Connaught, the Coburg bar has just gone through an express refit (taking 24 hours) with new furniture and carpets. That bar features a bar menu here that's also by Jean-Georges. We popped in for the truffle fritters and they come highly recommended. 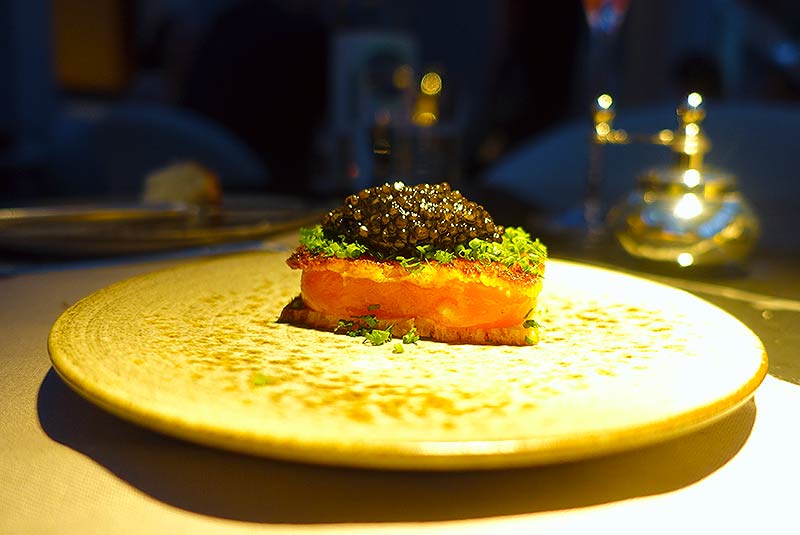 And in the restaurant, where should we sit?

Anywhere in the glass-covered atrium is your best bet. If you're coming for lunch it's perfect for a good bout of high net worth people watching (or for seeing if any stars are staying at the hotel). We should make a note here - all of the tables have a rather large marble base and this makes it pretty hard to sit comfortably. You get used to it, but be prepared to be sitting at a slight angle to compensate.

It's something of an eclectic menu, covering quite a few bases, including caviar, pizzas, grilled meats and fish (including a "simply prepared" section) and more.

But if there's a particular theme it's that standard classics are blinged up a little with some expensive touches. Overall, it's definitely not on the cheap side but you have to take into account that you're in the heart of Mayfair in one of its most exclusive hotels. That's going to have an impact.

We had the Taste of Jean Georges menu - a seven-course tasting menu for £88. It succeeds rather well in this, choosing all the dishes that people are talking about. So if you want to try as much of the key dishes on the menu as possible, head for this option. That said - because all the dishes on this menu are a taster of the main dishes, it's hard for us to tell you what portion sizes are like as a whole (but as a whole, the taster menu was more than enough for us).

So there's a pizza section and the one that really stands out is the black truffle and fontina pizza, which comes in at £29. That's something of a jump on the other pizzas (which are priced between £15 and £20) but as it is rather piled high with truffle so you can really see why it's priced that way. And hey, it's a damned fine slice of pizza too.

Other top courses on our visit were the egg toast and caviar - which is a shaped egg yolk sandwiched between toast and topped with a generous amount of caviar. And top marks for the "Cornish lamb chops, crispy onions, cucumber yoghurt" which was exceptional.

There's a particular showstopper dessert  - the peach candy floss (with "Red Currant Ginger Juice Peach Sorbet, Almond Mousse Fresh and Roasted Peach" - £12). That arrives at your table in full candy-floss form before being decimated in front of your eyes with the hot juice. It certainly has visual impact - but at the end of the day we much preferred the oozing chocolate dish - "Chocolate Streusel, Caramel Sauce Caramelised Peanut Ice Cream" (£12) 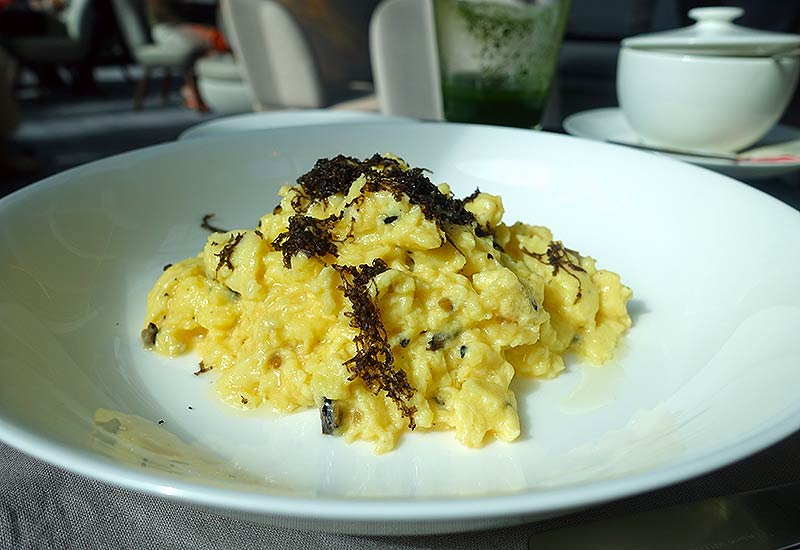 And the next day?

Yes, we stayed at the Connaught so that meant a return trip to breakfast the next day. We didn't try the now somewhat infamous peas or beans on toast but instead went straight for the dish almost everyone else was having, truffle scrambled eggs (£28) - which was just what we wanted - a pitch perfect scrambled eggs with tons of truffle shaved over the top, which explains that price. And alongside this, the sunny site up frittata - which was something of a deconstructed frittata (£12) - a base of soft fried eggs overlaid with corn, bacon, toasted croutons and peppers.

All in all it was a pretty light way to start the day, although we did undo the effects of the green cold pressed juice by pairing that with the pastry basket, complete with mini croissants, muffins and more. They apparently have plans to open a hatch into the kitchen - so you'll be able to order these even if you're not dining at the restaurant.

Although this is billed as a neighbourhood restaurant, it's a Mayfair neighbourhood restaurant with all the extra fripperies and price that refects that. That aside, we think Jean-Georges manages to migrate the idea of a local spot while adding the necessary pizazz that a hotel like the Connaught needs. With Helene Darroze looking after the fine dining aspect with panache, this new restaurant should fit in very nicely at the hotel.

Hot Dinners were invited to Jean Georges at the Connaught. Prices are correct at the time of writing.

What: Jean-Georges at the Connaught