Test Driving Hoppers in Soho - another triumph from the Gymkhana folk 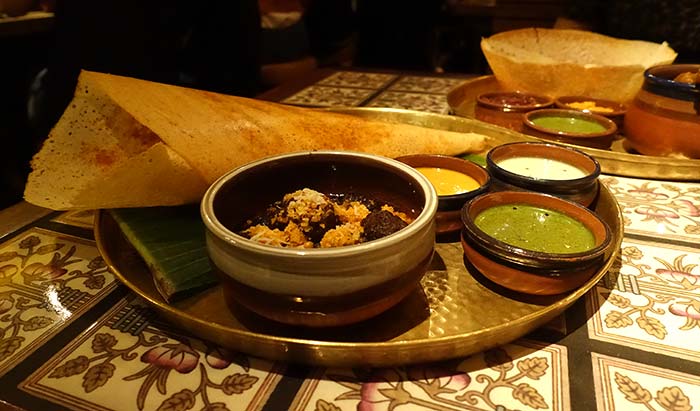 What can you tell us about Hoppers?

It's the new place from the Sethi siblings - aka the people behind Trishna and Gymkhana, but who are also backers of Lyle's, Bubbledogs and Bao.

This is their smallest place yet, inspired by Sri Lankan roadside shacks with the focus on dipping and wrapping up cone-shaped dosas and the bowl-shaped hoppers themselves. Expect to get your hands dirty in this restaurant (but plenty of clean wipes are on hand).

It's taken over the space from the late lamented Koya, but you'd be hard pressed to recognise it as the same room - it's had a head to toe makeover. We particularly love the tiled tables (you can see these on the pics below).

Is it walk-ins only?

It is indeed  and given the type of menu (it's a much speedier turnaround than Gymkhana) that's inevitable for such a small restaurant. They're still working through the best way to manage the queue and were taking people's numbers when we last visited, which should make the wait easier.

If you can actually go straight in, then just grab a table right there and then. But - if you do need to grab a drink while waiting for a table and don't happen to have a handy membership to one of Soho's many clubs, the best bets nearby are probably Kettners, the French House or pop across the road for a cocktail at Chotto Matte beforehand.

If you do actually have a choice, grab one of the mini booths for two at the back of the restaurant, we think they're the best tables.

Frankly speaking, the value at Hoppers, particularly when taking into account the quality, is very, VERY good. The hoppers alone, £3 plus a maximum of £5.50 for an accompanying kari and £1 for chutneys would almost be enough food on their own.

So you really could pop in and get a great quick snack here - it's certainly something we'll do if we find ourselves in the area off-peak. We've worked out that you could actually work your way through the ENTIRE menu, and it's not that short, for just over £200 and this would happily feed a whole, and hungry, crowd.

So - it's great value, then. And as for the standouts? We'd recommend:

At this point it's also worth mentioning that there's a very handy glossary at the bottom of the menu just in case you don't immediately recognise the ingredients. We're happy to admit we referred to it a lot - very handy.

Cocktails are £8.50. They're great to drink with snacks while choosing the rest of the menu - the Kandy Gunpowder (£8.50) was our favourite - but we did find that the Lion Lager was a better accompaniment for the rest. And a half bottle of white wine - Gavi Le Marne Michele Chiarlo (£14 for 375ml) went down very well too. Sparkling/still water is free.

As a follow-up to Gymkhana, all eyes were on Hoppers to see just what the Sethis could come up with next. It seems they've pulled the knowledge on partnerships with restaurants like Bao to great effect and created another must-visit Soho destination. An easy recommendation - good food at great prices, what more do you want?

Hot Dinners were invited to Hoppers, prices were correct at the time of writing.