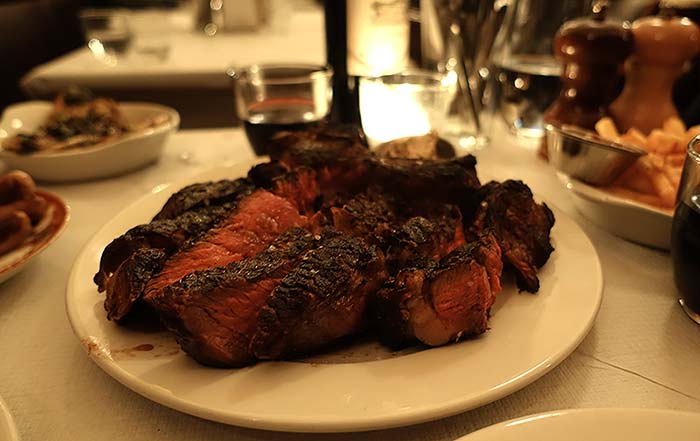 So what can you tell us about Hill and Szrok?

This is the second opening from the team who first brought us a butchers by day/restaurant by night place when they opened Hill & Szrok in Broadway Market. Now they've expanded their business, by taking over the former Three Crowns gastropub.

Just off Old Street roundabout on the corner of East Road and Brunswick Place - just over the road from Moorfields Eye Hospital.

You're not short of drinking holes around here - and of course you could just meet them in the front part of the pub which is still very much a working pub. But, if you're after something a little more special you could do a lot worse than The Gibson - a cracking little cocktail bar about a 5 minute walk away down on Old Street itself. And of course, you have Nightjar literally seconds away too.

There's a large marble-topped communal table right in front of the pass with a mixture of small groups on it which looked like a lot of fun, but we rather liked our corner table at the back of the dining room, looking out over the whole pub.

So what's the deal with the food here?

Make no mistake, this is quite categorically a gastropub that specialises in meat. There's a meat fridge just to the side of the restaurant itself filled with huge sides of beef for ageing, as well as two blackboards - one giving information about where the meat that day comes from and the other the special cuts of the day which were T-bone and cote de boeuf when we visited.

The menu, other than that, is very short - four starters, five mains (four meat - one fish) and five sides. Of what we had, standouts were:

As for the beef itself (we had the cote de boeuf), as you'd imagine it was marvellous - full of flavour and beautifully cooked. But, and you can call us heathens for suggesting it, we'd have loved some sauces to go with it.

There was just one dessert on for our visit - a really very well made vanilla cheesecake.

It's all about the red, as you'd expect, and our bottle of Malbec Cavee Julien Domaine la Bergangeraie (£35) was more than a match for all that meat.

Go to Hill & Szrok for a good pub night out where the steak really is a cut above. This is a meat gastropub plain and simple and it was wedged on an Tuesday night, so it's clearly doing something right. We thought the buzz was just lovely and it was nice to see that there was still plenty of room for drinking here too. Next time we'll be back to try some of the well-regarded bar snacks. There's a scotch egg and bowl of pork scratchings with our name on it.

Hill and Szrok is at 8 East Road, Old Street, London N1 6AD. Find out more from them on Twitter @hillandszrok

Hot Dinners were invited to Hill & Szrok, prices are correct at the time of writing.