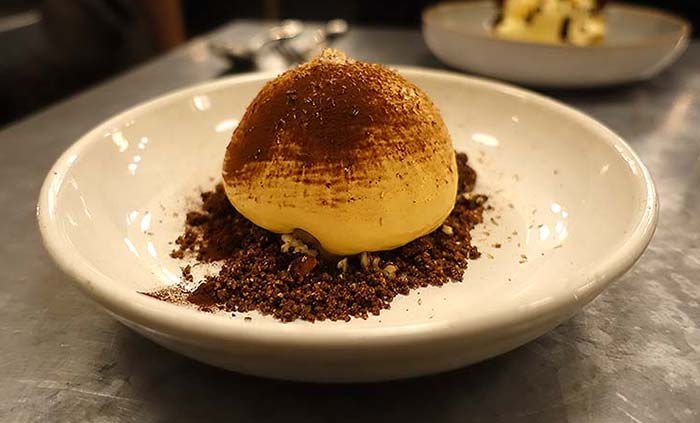 What can you tell us about Frenchie?

The restaurant has gone the roundabout way to setting up in London. Its chef Greg Marchand was originally trained in the UK and got his "Frenchie" moniker from Jamie Oliver himself. That stuck and was what he used to christen his first restaurant in Paris.

The Paris Frenchie has built up a healthy reputation over the years and has grown - adding a wine bar next door as well as a cafe.

Now they've taken their restaurant to the UK - following some more recent high-profile and upmarket French restaurants - setting up in Covent Garden.

On Henrietta Street in Covent Garden and it's another example of how Covent Garden is - very slowly - actually becoming a place to head towards if you want a good meal out. It's interesting to note that there are a few buildings close by currently being renovated - it would be great to see the Frenchie wine bar make its way over here too.

If you fancy pushing the boat out for a VERY well made cocktail, then head straight for Rules around the corner. Alternatively, you could have a decent glass of wine or two at the Ten Cases, a nearby favourite of ours.

Right at the back of Frenchie, there's also a small spot for drinks only. And going by the cocktail we had - it's worth coming early for one.

There are a few options - depending on your tastes.

There's a bar with very comfy looking seats for counter dining upstairs and downstairs there are a few seats in front of the open kitchen if you want to see the chefs in action. That's the place to go if there's a group of you. Upstairs did have a good vibe but the tables are very close to each other - noticeable when you try to edge out without disturbing your neighbours.

(A welcome return for this section of the Test Drive.) There IS an excellent portion of bread on every table - but you may want to hang onto this to mop up some of the later courses.

There has been a wee bit of controversy about the size of the servings at Frenchie - but by going by the reaction to some of our Instagram shots, it seems that the chefs have been listening as we didn't think anything was overly small on our visit.

We asked Frenchie who weren't specific about making things larger - but did say that they paid attention to and noted the feedback they were getting. We also noticed a few other things that had been mentioned in early reviews that were addressed (individual plates to allow more sharing), so it does seem that they are paying attention as the restaurant settles.

As for that food - it's essentially Parisian bistronomy with British ingredients. Gussied up comfort food, if you will. It's primarily based around sharing dishes - although there are a couple of pricier dishes that would happily suit as a main course too. Most of the sharing dishes can easily be split between two - but you'll need four or five of them.

As for our meal - our top bites were:

As mentioned, there' s a decent selection of cocktails at around the £12.50 mark and lots of wines by the glass and carafe too (carafes start at £16.50, bottles from £28).

We've had a few restaurants head to London from Paris recently, but few have really managed to make a big mark on the city - but this has changed with Frenchie. The bill can add up, for sure, but portion sizes do seem to be on the up and there's a very good value set lunch too.

But the main draw is the cooking on offer - and we've had some of our best dishes so far this year at Frenchie. It's a good addition to London that genuinely brings something slightly different - and with a good dash of quality and friendly service too.

Frenchie is at 16 Henrietta St, London WC2E 8QH. Find out more about Frenchie.

Hot Dinners were invited to Frenchie. Prices were correct at the time of writing.