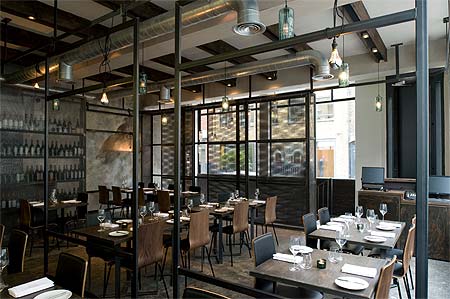 What can you tell me about Dabbous?

The restaurant is named after its chef, Ollie Dabbous, who was Head Chef at Texture and began his career with Raymond Blanc at Le Manoir au Quat Saisons (who has been a big supporter of this new restaurant). He's also spent time working at the Fat Duck, Noma and NYC's WD-50. This is his first solo venture and has been hotly touted as one of the key openings of 2012.

It's at the bottom end of Whitfield Street, right in the middle of Fitzrovia, just off Charlotte Street. Your closest tube is Goodge Street, and note that it's possible to miss the restaurant sign if you're coming from Goodge street. Just look for the big open window into the restaurant.

Ollie Dabbous is highly respected in foodie circles and if you're a fan of the Roganic school of cooking, you'll love this. While the tasting menu is for the whole table, the à la carte lends itself to sharing, too. We imagine that locals will soon be flocking to the bar downstairs (as the area isn't blessed with decent bars) and the quieter restaurant will be ideal for media execs in the area taking out clients.

As Dabbous is just north of Goodge Street, there are plenty of pubs to meet up in there or you could always meet up in the nearby Charlotte Street hotel. However, the best option is the huge basement bar, which is twice the size of the upstairs restaurant. On our visit, when Dabbous was only open for a week, it was already popular, despite being hidden away in the basement. Oskar Kinberg, formerly of the Cuckoo Club has put together a good cocktail list (and happily a short one), with strong well-made cocktails. The Bulletproof (Woodford Reserve Bourbon with greengage liqueur and gooseberry jam) was one of the best cocktails we've had in a while, so the bar comes highly recommended. The equally brief bar food menu includes a steak sandwich with tobacco butter and onions pickled in wheat beer which we'll be back to try.

The restaurant is pretty small and most of the tables seemed OK but the tables alongside the side wall of the restaurant, with the bright light of the kitchen behind them, looked particularly good to us. Although we did note that the waiters kept bumping up against the curious iron divider bars. We're not sure if that's a new design feature or one inherited from its days as the Cyberia cyber cafe; either way they didn't work.

Onto the food - is bread included?

Absolutely, and it's served in a dated paper bag, indicating that it was baked that day (see the gallery below). This is a nice touch, but it does mean that the waiters won't know if it's empty, which will be pretty quick given how good this seeded sourdough is.  We couldn't work out why, but the bread had a distinct smoky/ barbecue aroma to it.  The waiter thought it might be because it was kept above the grill - but whatever it was, it worked. Combined with the freshly churned salted butter, it was a winner.

And what do you recommend ordering?

You can chooose to go à la carte - where you're prompted to order about six plates in total - or opt the tasting menu. We went for the latter to see just how the chef would have us eat.  This was £49 per person for five courses plus a palate cleanser. An immediate hit was the beef tartare with cigar oil, whiskey and rye - practically a gentlemen's club on a plate. We loved the coddled hen's egg with mushrooms and smoked butter served up in the eggshell - an Autumnal take on the eggshell with sturgeon saboyon we tried last year at 11 Madison Park in New York. Another striking dish was the barbecued Iberico pork with savoury acorn praline, turnip tops and homemade apple vinegar, served slightly pink as is the current vogue with the nuttiness of the acorn paste a neat foil to the tender pork.

Our dessert was a chocolate and virgin hazelnut oil ganache, basil moss and sheep's milk ice cream which really showed off the chef's skill in combining various textures to create a dish that not only tasted great but looked beautiful.

We also took a look at the à la carte menu and saw a number of things we'd return for - like the braised veal cheek with spelt, mixed alliums and a St Gall broth - but there was one thing we just had to order as an extra for our tasting menu. The mashed potato in roasting juices with black truffle caught our eye and we couldn't leave without trying it. It was as good as it sounded, creamy mash topped with shaved truffles with Sunday lunch roasting juices poured around it - a little bowl of comfort.

The wine list is a godsend to anyone wanting to roam around the list without forking out for a whole bottle (it also works well if you just want a small taste of wine for a working lunch). Wines by the glass start out at £4.50 for a Casa Maria Verdejo Blanca and £6.50 for a Castillo Paniza Tinto - with between six and seven reds or whites available by 175ml glasses, half bottle crafes or bottles. There was also a wider than usual range of champagnes by the glass starting at Moet for £10 and soaring up to Dom Perignon for £35. We had our wine matched with the meal and the sommelier chose really well - but alas we didn't take note of his recommendations.

We should mention that they broke the first of our 2012 resolutions as we were served a couple of dishes before the wine was on the table. However, we'll let that one slide as we were there for the restaurant's first week of opening and service hiccups we're sure will be ironed out.

We had high expectations going into Dabbous and they more than met them. In many ways the style of the food and presentation is comparable to Roganic, even though Ollie Dabbous has been making food like this in London for a good while at Texture. But the setting and size of the dining room here makes for a more laid back vibe. Combined with the cavernous bar downstairs Dabbous looks to turn the side streets off Charlotte Street into a new dining destination.

Find out more about Dabbous

Hot Dinners were invited to eat at Dabbous.  Prices are correct at the time of writing.