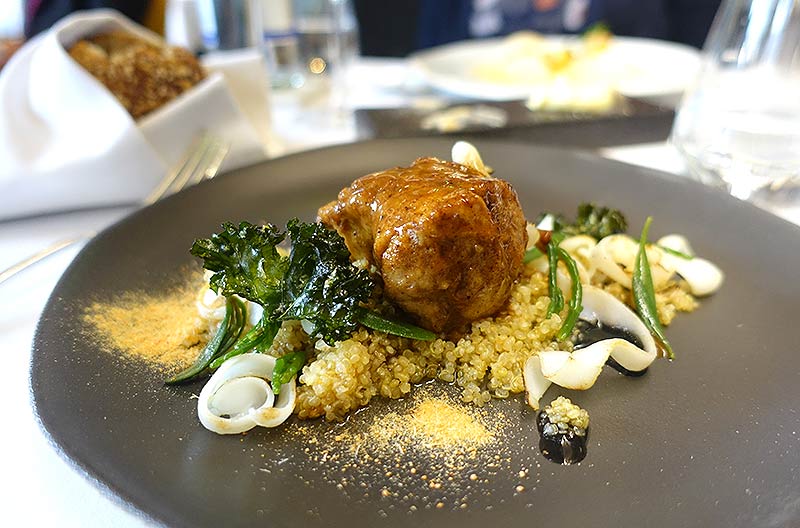 So it's all change at Club Gascon?

Run by chef Pascal Aussignac, this Smithfield restaurant has been around for 19 years - an impressive feat in London - and has held a Michelin star for 15 of those. So it's very much a London institution. When it first opened, they were met with criticism that the restaurant was on the outskirts of the City as opposed to being where all the other restaurants were opening. How things have changed in 19 years.

And now more change is afoot?

Yes, they've just emerged from a long-promised revamp which has seen the restaurant completely reinvented. 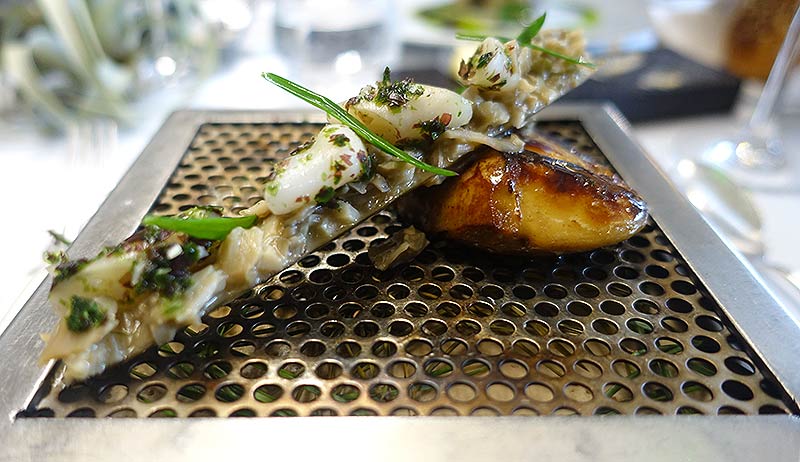 The bar at the back of the restaurant is gone - they have Bar Gascon next-door if you just want to pop-in for a quick drink - and the restaurant has opened up as a result. They haven't added any new seats - but have instead taken the opportunity to spread people out a little.

And downstairs is where a huge change has taken effect. By buying a space at the back of the restaurant, they've been able to double the size of the kitchen, something almost unheard of in a central London space. So if you've ever had the chance to pop your head in there before, prepare for a big change.

If I haven't been before, where exactly is the restaurant?

It's a few steps from the south side of Smithfield market - if you're coming here by tube, aim for Barbican or Farringdon. 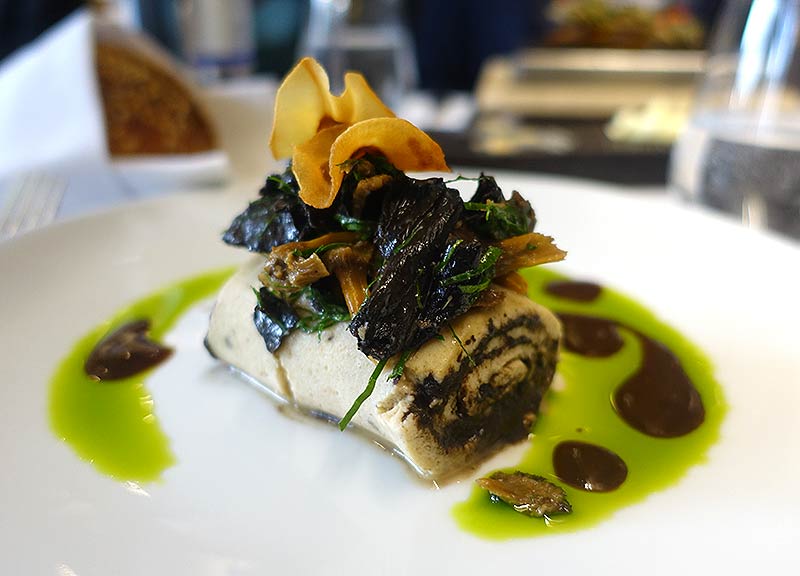 And how about a place for a drink first?

As mentioned, there's always Bar Gascon next door - which is probably your best bet. There's also St Bart's Brewery on the corner too - but beware that it can be heaving when then City kicks out for the evening.

And now for the food - the menu's changed?

Yes, there's a different layout here on the menu front too. So while you'll still be able to opt for the tasting menu, the a la carte is split into three sections. First there's Gascon, where you'll see more of the restaurant's classics (expect a lot of foie gras in this section), then there's Season, which is for the seasonally changing dishes, and lastly Garden where it's all about the vegetables.

Each of those distinct menus contains starters and mains - you may need some assistance to check which is which though. And we're at Michelin-level prices here, so be prepared for that.

There are a few extras?

Yes, even with the main a la carte there are extra canapes, an amuse bouche and more. Standouts here were the "Sexy Cheese Crackers" to kick everything off  (creamy cheese crackers with black truffle) and the grapes covered with fennel. Oh and the butter... 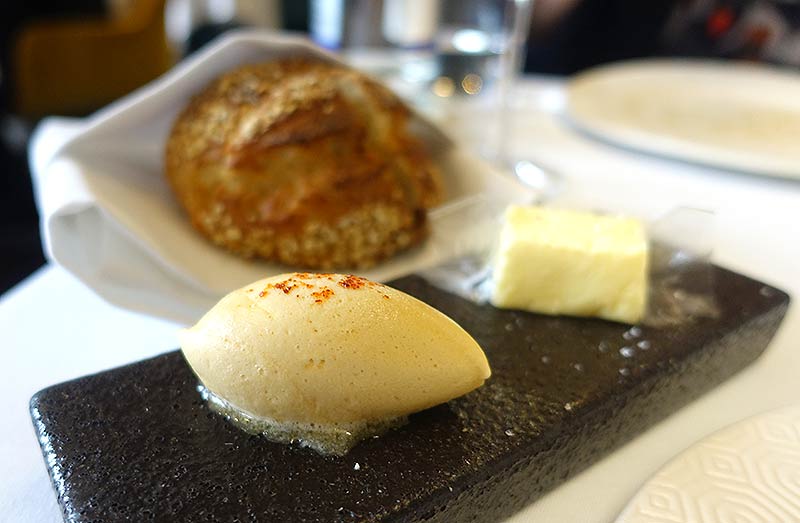 So the butter's pretty special?

There are two types - your standard salted kind which was also very good - but completely outshone by the other type, lobster butter. Yes, that's right - lobster butter. This was one of the most wonderful things we've put on bread at almost any restaurant we've been to. There's just a touch of the taste of lobster - not too overpowering, just enough to make it one of the finest spreads on the planet. It's outstanding.

And any particular recommendations from the main event?

While we will immediately admit that it's not for everybody, Club Gascon and Aussignac are well known for foie gras dishes. So if that's something you like too - you should definitely make sure to try one here. We had the "barbecued foie gras "énclade" with pine, mushrooms and razor clams (£22.50) - delivered to the table while still smoking. And yes, it was a particularly good piece of foie gras - so highly recommended.

We also seem to be having sweetbreads a lot at the moment. Here large veal sweetbreads come with what they call "lobster sand" and cuttlefish tagliatelle (£25) which was a lovely dish. 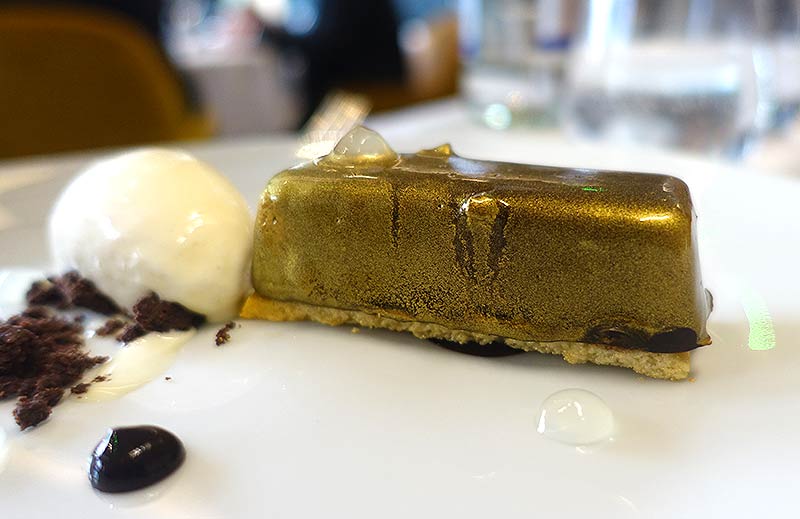 Definitely save yourselves some space, with both selections here being top notch. First off, there's the citrus souffle with confit kumquat, basil oil and frosted vinegar (£10) - which is what most people seemed to be ordering (you'll see it being delivered to tables across the room). And it's a damned fine souffle as you'd expect.

But also check out the Millionaire (£10) - which is a chocolate praline with black olive, lemon gel and thyme ice cream. It's also going to be one of the blingiest desserts you'll ever come across, given that it's coated in gold.

Bottles start around the £32/£35 mark but you can obviously push the boat out significantly. And we're pleased to see that there are a number of half bottles on the list (starting at £19.50) if you're taking things easy. We ourselves had a sommelier selection here - all extremely well paired with some new surprises to add to our list of bottles to buy in future.

We've only been to Club Gascon once before - but that was enough to see what a dramatic change there is to the room. More open, a bit swankier and with a new kitchen that is allowing the menu to evolve. A classic restaurant that deserves to remain so for quite some time. Now if we could just have some more of that lobster butter...

Hot Dinners were invited to Club Gascon. Prices are correct at the time of writing.