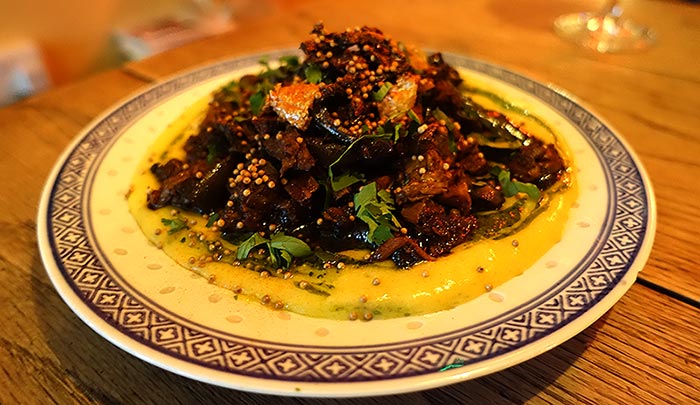 What can you tell us about Chinese Laundry?

This Chinese restaurant on Islington's Upper Street opened last year. It's one that's based on a family cooking style, so don't go in expecting your normal Chinese restaurant. And it's won over its share of critics too, including Giles Coren. They've just brought in a new Spring menu so, as Islington locals, we popped down the road to check it out.

It's on Upper Street, near to the newly opened Galley and very close to the John Salt pub too. Angel's your best bet for a tube stop nearby.

Where should I pop in for a drink beforehand?

It's not too far to 69 Colebrooke Row for arguably the best cocktails in London, and if you're coming from the Highbury and Islington end, we'd highly recommend popping into Little Bat for a cocktail . Alternatively the John Salt is nearby if you fancy a quick pint.

It's a relatively short-ish menu for a Chinese restaurant - but that's also something of a blessing. We'd recommend as much of a tour of the menu as you can - all the dishes we had were great, so it's worth experimenting. The particular winners were:

As mentioned - it's worth kicking things off with a cocktail - there are quite a few based on baiju (Chinese grain-based hard liquor) and they're pretty decent value for £8. As for the wine - it starts at £21 for a bottle of Picpoul. And there's also a good selection of baiju to finish off with too.

A Chinese restaurant with a difference, Chinese Laundry really adds something to Islington's diverse eating out scene. Well worth checking out if you're in the area.