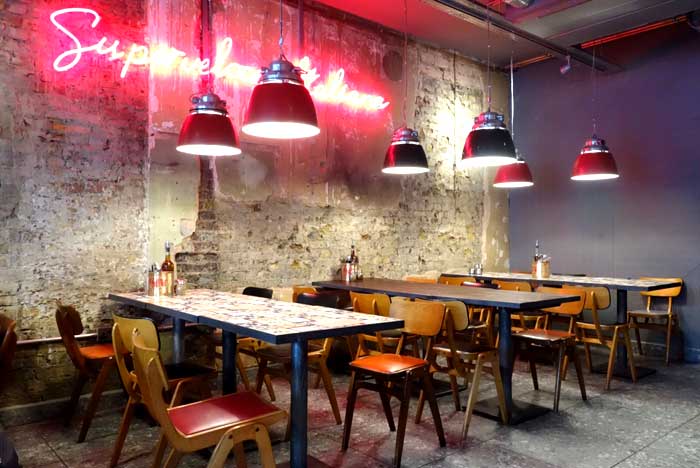 This King's Cross pizzeria promises to serve up wood-fired, Roman-style pizzas  in minutes. We went to see if Pizza Union was as good as it sounded.

Up Pentonville Road, just past La Scala - on the opposite side of the road to Honest Burgers. Just a couple of minutes from King's Cross station.

The place was nicely busy, even on the August bank holiday weekend and seemed to be a nice mixture of students, tourists and families. And it's perfect for local workers too.

This is Pizza Union's second restaurant (the first opened in Smithfields). They specialise in thin Roman pizzas which - thanks to a whopping pizza oven - are ready in just a few minutes. You order up at the counter, and are given a buzzer which lets you know when yours is ready to pick up.

There are 15 pizzas to choose from - all 12". We went for a straightforward Funghi £4.95 - adding a soft egg and tuna to the toppings - and also a Manzo - featuring ground beef, garlic, green chillies and rocket £5.95. Both were very good - the Manzo had the edge, just. We thought at those prices they'd be tiny things, but they were pretty filling. We added a basic salad of rocket, tomato and parmesan to the mix (£2.95) and washed it all down with glasses of their house wine at just £3 a tumbler.

You may be thinking after your pizza that you couldn't manage dessert - but you'd be wrong. The Dolce are smallish, warm dough rings stuffed with mascarpone and a range of other fillings. Our Coco version - with coconut and chocolate (£3.50) was insanely good.

A fine addition to the King's Cross area. The teenager we brought vowed to come back and bring all her friends because it was such good value and we'd happily return ourselves.

Pizza Union is at 246-250 Pentonville Road, London N1 9JY. Keep up with their news on Twitter @pizzaunion

Hot Dinners were guests of Pizza Union. Prices were correct at the time of writing.