[SIGPLUS_EXCEPTION_SOURCE] Image source is expected to be a full URL or a path relative to the image base folder specified in the back-end but /blog/2014/hawker-house/gallery is neither a URL nor a relative path to an existing file or folder.
0
Shares

What can you tell us about Hawker House? 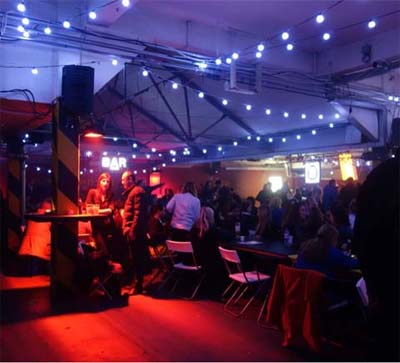 Put simply, it's Street Feast indoors. The summer months sees Street Feast gather together some top street food traders in Dalston Yard while this winter version has them bringing everyone indoors into a much warmer location near London Fields.

It's nearest to Cambridge Heath station, but easy walking distance (less than 10 mins) from Hoxton Overground too. They've set up shop in a redecorated warehouse on Pritchards Street.

In fairness, the best place to meet is going to be at Hawker House itself, particularly if you're likely to get there early. There's plenty of space to sit with a beer or cocktail while you're waiting. And nearby, there are lots of options as Broadway Market's only about five minutes away. Plus you're only about 10 minutes from Rita's Bar and Dining if you fancy a cheeky frozen margarita.

It's a decidedly mixed bunch inside - with an older crowd perhaps more obvious earlier in the evening (and definitely hanging around the Street Vin area, which was something of a calm oasis). But generally speaking anyone who likes street food as much as we do would be very at home here.

Was it heaving inside?

We popped along on a cold late January evening and it was pleasantly buzzy but not too crowded all night - we were never waiting more than five minutes for any of the food we ordered. However, we hear it was very busy pre-Christmas - so it all depends on the night you're going. But the rule of thumb will always be to turn up earlier if you want to avoid the crowds as it was noticeably busier as we were leaving (but you could still grab a table). There's a handy clockroom so you don't have to lug your coat around all night with you.

The space is loosely split into three parts - the main room with plenty of tables and traders and a Hot Bar. To the side of this is the main bar as well as a DJ box and space for a dance floor. Then you can head through into a third space where there's a few more traders, the Whisky Bar, Street Vin and more tables upstairs with a slightly more chilled vibe.

The only answer to this is really - "as much as you're possibly able to". Everything we had was frankly brilliant, put together by street traders who really know their stuff.

We started the night out with Breddo's Tacos - trying out three of which we'd happily devour again - the chicken, beef and monkfish. Our only disappointment was not being able to try their pork belly croquettes which despite us getting there at about 7.30pm had already sold out. Lesson - the early bird gets the croquette.

We had excellent burgers from both Bleecker Street Burger and Spit and Roast. The former was their special of the weekend - a Super Bowl double burger that had jalapeños, fried tortilla chips, bacon and nacho cheese. It was truly epic and was a great example of how Bleecker Street is knocking out some of the best burgers around at the moment. We can't wait for them to get a permanent space. The second burger from Spit and Roast (our first time trying them) was also a triumph - buttermilk chicken and hot Korean sauce. We could have easily managed both of those again, despite how full we were by that point.

On top of this, we couldn't resist a couple of pork buns from the wonderful Yum Bun and rounded the whole night off with some salted caramel and pecan doughnuts - straight out of the fryer - from You Doughnut. An excellent way to finish off a night of top notch eating.

Here, you've almost as much choices as the food - with four separate bars to choose from. Alongside the main bar (serving up some huge pint-sized margaritas) there's the hot bar (hot toddys, hot buttered rum and more), the whisky bar (with a wonderful wall of whisky and an excellent julep they'd knocked up on the night with rye whiskey macerated cherries  "because they'd been bored") and our personal favourite, Street Vin where we tried a lovely Lambrusco and tried to forget it was still winter outside.

We've been eager to try Hawker House for a while now but were unable to make it in before Christmas. It's a perfect way to make your way around an array of excellent street vendors in the winter without catching your death and being buoyed up by an array of excellent drinking options at the same time. Go - your only regret will be not to have been before.

Hawker House is 38-50 Pritchards Road, London E2 9AP every Friday and Saturday night until the weekend of 21/22 March 2014 and is open from 5pm to midnight. Find out more about Hawker House.

Prices were correct at time of writing. Hot Dinners were invited as guests of Hawker House.