Still classic after all these years - we Test Drive the Ritz 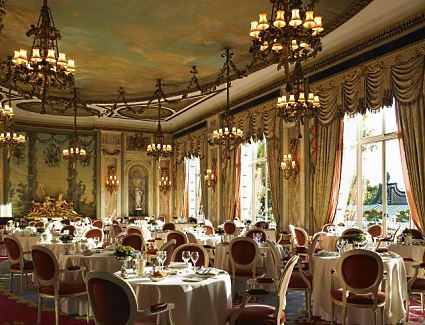 This is the main dining room at the Ritz at the end of Piccadilly, just near Green Park station. You'll definitely be able to spot the building, trust us. Walk right through the hotel and you'll find the restaurant at the end, overlooking Green Park.

How about the new bar at Keepers Lodge at the Royal Academy just a little further down Piccadilly? Alternatively we kicked off our evening in the Rivoli Bar at the Ritz where we had an Elixir made with Sipsmith gin and camomile foam and an off-menu Sidecar both of which were expertly mixed and served with a nice selection of fat olives and cheesy bites.

Hold on, don't I have to get all dressed up?

The dining room at The Ritz, which opened in 1906, is one of the last remaining places in London with a specific dress code. Gentlemen are requested to wear a jacket and tie while jeans and trainers are a total no-no. This little thing tends to put a lot of people off, but we applaud them for sticking with it. Sometimes a definitive dress code makes things so much easier - none of this spending ages putting together an outfit which doesn't look like you've made an effort that's required of a night out in Dalston. This is one of London's most luxurious hotels and poshest dining rooms and actually it was really nice that no-one swanned in wearing jeans and baseball caps.

So it's seriously swanky then?

The designer of this rococo dining room left no surface ungilded. This is categorically not a minimalist restaurant. There's a four piece string quartet playing a mixture of Cole Porter and show tunes; liveried waiters swoosh between the tables and it's almost packed on a Thursday evening. It's unashamedly posh and, to be honest, we love it.

From where we were sitting by the windows we could see a lot of couples celebrating special events, but there were also plenty of family groups keeping the room buzzy. A fair few must be guests, but this doesn't feel like the usual hushed hotel dining room.

What sort of food is it?

Chef John Williams CBE has been in charge of the restaurant at The Ritz since 2004. Over the years he's built on the foundations of the hotel's gastronomic history of which much has been made of in recent episodes of Downton Abbey. So yes the food bears the hallmarks of Escoffier but Williams has made the dishes lighter and less rich.

We went for the menu surprise paired with fine wines. It cost (brace yourself) £185. So yes, it's pricey, but we have paid more to be less stuffed with good food and wine at the end of the evening. As the name suggests you've no idea what's coming, so when the wines for each course were poured, we were told - "this is going to go brilliantly with...well you'll just have to wait and see".

There are alternative options though - £155 for a classic wine pairing or £95 for the food alone.

Amuse-bouches included a very amusing lemon meringue with salmon caviar, a neat and sweet rethinking of a trad smoked salmon starter and from here we progressed through courses of scallops with apples, langoustine with heirloom tomatoes and a terrine of goose liver with miniature almond cake. And that's when the veal sweetbreads with parsnip and black truffle came out which frankly were an earthy Autumnal treat of such deliciousness that nothing else we had following it quite hit those heights.

As we had no idea what we were having, we were expecting some sort of beef course for the last mains dish, so the arrival of a trolley with two grouse on it was met with little squeals of delight by us. It came with all the usual trimmings, bread sauce, breadcrumbs, jus and was suitably wonderful. Desserts began with an unimprovable lemon sorbet with raspberries and was followed with hazelnut semifreddo, but to be honest by this point we were letting out our belts and reaching our limit.

The service is - as you'd imagine - excellent. But it's never stuffy. There is a lot of synchronised dome lifting going on which, when you've spent as much of the past year sitting on pavements eating street food as we have actually came as a very welcome change.

We enjoyed the services of both the head sommelier Tobias Brauweiler and his colleague over the course of the evening. They were brilliant at telling the story behind the wines, talking knowledgeably (but not boringly) about the vineyards and the people who made the wine. Their expertise added to the whole experience.

For a special occasion or treat the restaurant at The Ritz Restaurant comes hugely recommended. It's frankly crazy that food this good and service this seamless has been left without a Michelin star when other newer (and whisper it, undeserved) places have one. There aren't many places like this left in London, so if you have the money to spare, or wish to save up for it, you'll get precisely what you pay for here - a very good time indeed.

Prices were correct at time of writing. Hot Dinners ate as guests of the Ritz.